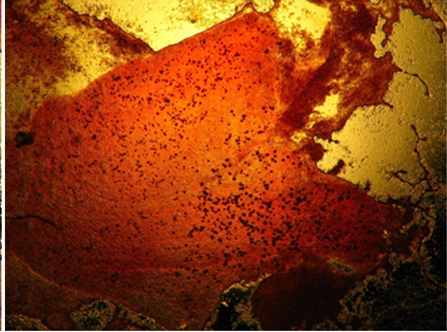 In shallow waters around the world, where nutrient pollution runs high, oxygen levels can plummet to nearly zero at night. Oysters living in these zones are far more likely to pick up the lethal Dermo disease, a team of scientists from the Smithsonian Environmental Research Center discovered. Their findings were published Wednesday, Feb. 11, in the journal PLOS ONE.

Oxygen loss in the shallows is a global phenomenon, but it is not nearly as well known as the dead zones of the deep. Unlike deep-water dead zones, which can persist for months, oxygen in shallow waters swings in day-night cycles, called diel-cycling hypoxia. When algae photosynthesize during the day, they release oxygen into the water. But at night, when photosynthesis stops, plants and animals continue to respire and take oxygen from the water, causing dissolved oxygen to drop. Lack of oxygen can cripple the oysters’ ability to fight off the parasite Perkinsus marinus that causes Dermo and slowly takes over their bodies.

“We usually think of shallow-water habitats as highly productive refuges from deep-water dead zones,” said Denise Breitburg, marine ecologist at SERC and lead author of the study. “But if low oxygen makes even these shallow waters inhospitable for fish and shellfish, the whole system may suffer.”

In a field experiment, Breitburg and her colleagues suspended hundreds of eastern oysters (Crassostrea virginica) in underwater cages at each of 14 sites around Chesapeake Bay. Some that were only a year old and did not show signs of being infected were used to test the vulnerability of new populations, especially where oyster restoration is concerned. Others that were older and had already been infected were used to test whether low oxygen made the disease more severe. After four months, oysters from each cage were randomly sampled to uncover Dermo infections at each site.

Across the various sites, infection prevalence ranged from at least half to up to 100 percent. Oysters in areas with more severe low oxygen were much more likely to acquire the disease. The disease also advanced to more intense levels in oysters deployed at sites with both low oxygen and salinities at or above 12 parts per thousand. These higher-salinity waters are where Dermo causes extensive mortality in wild populations of oysters.

The researchers followed up their discovery with a more controlled lab experiment to pin down the exact role of low oxygen. In a lab informally called the “Room of DOOM” (Dissolved Oxygen Oyster Mortality), they exposed oysters to low-oxygen cycles similar to those in the bay. Some had constant levels of normal dissolved oxygen concentrations (about 7 milligrams dissolved oxygen/liter), some dropped to 1.5 mg/L for a few hours each day and some dropped to 0.5 mg/L.

Young, uninfected oysters were the most vulnerable in lab. Young oysters exposed to low oxygen were nearly three times as likely to become infected with the parasite in the first year of the experiment as their counterparts with consistently healthy, high oxygen. Unlike in the field, low oxygen did not seem to impact the disease’s intensity. Breitburg suspects this means that some other factor also plays a role in the field. In the bay and other estuaries, acidity, temperature, salinity and food also vary from location to location.

But when it came to oysters’ ability to clean and filter water, the researchers found something surprising. Oysters’ powers of filtration flagged during periods of low oxygen. But during periods of recovery, their abilities bounced back—sometimes reaching even higher levels than oysters that had never experienced low oxygen at all.

“Our results suggest that we will need to think about the effects of even short periods of exposure to low oxygen when choosing sites for oyster restoration,” says Breitburg. “But, in spite of the problems we’ve found, these shallow waters may be high-priority candidates. If restoration is done at sufficiently large scales in shallow-water sites, where oysters can access and filter the entire water column, the oysters themselves may be able to transform habitats with water quality that is harmful to oysters to habitats in which oysters thrive.”

Scientists from the U.S. Geological Survey, the Virginia Institute of Marine Science and the Maryland Department of Natural Resources contributed to this report. The study will be available after publication at http://dx.plos.org/10.1371/journal.pone.0116223. For images, an advance copy of the paper or to speak to the authors, contact Kristen Minogue (minoguek@si.edu, 314-605-4315).