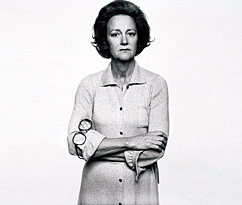 Born into privilege, newspaper publisher Katharine Graham (1917–2001) was catapulted onto the international stage as publisher of The Washington Post during the Watergate scandal in the 1970s. From her entrée to the world of journalism to her formidable attainment of power, the National Portrait Gallery’s “One Life: Katharine Graham” exhibition presents a multifaceted view of the woman whose personal tenacity had the ability to shape the nation. The one-room exhibition of the Portrait Gallery’s continuing “One Life” series will open Oct. 1 and continue through May 30, 2011.

Graham was introduced into the newspaper business as a teenager when her father, Eugene Meyer, purchased the Post at a bankruptcy auction in 1933. From that point on journalism guided her career as she took on reporting stints and married Philip Graham (whom Meyer consequently appointed publisher of the newspaper). After her husband’s death in 1963, Graham became president of the Washington Post Co. She was involved in a series of events that placed herself and the Post in a position of international influence, including publication of the Pentagon Papers—a history of the U.S. involvement in Vietnam that pushed reporting boundaries—and persistent coverage of both the Watergate scandal and the subsequent 1974 resignation of President Richard M. Nixon.

“Katharine Graham was one of the most influential leaders in 20th-century America, as well as a confidant and friend to countless American decision-makers,” said Martin Sullivan, director of the National Portrait Gallery. “Her unstinting support for investigative journalism and freedom of the press made The Washington Post an enormously powerful presence in the nation’s capital.”

“One Life: Katharine Graham” develops a narrative of Graham’s life story through photographs, cartoons, drawings, a newspaper from the time of the Watergate scandal, her handwritten manuscript of her memoir, Personal History (1998), and the Pulitzer Prize she received for the book. It draws heavily from family photographs provided by her estate. A wedding portrait of Katharine and Philip Graham—taken by family friend Edward Steichen—marks the idyllic beginning of their tumultuous relationship that ended with his mental illness and suicide. Richard Avedon captures a composed and intent Graham in a photograph from the post-Watergate era.

“One Life: Katharine Graham” also contains an antique wooden laundry wringer that was presented to Graham by reporters Bob Woodward and Carl Bernstein to commemorate the close of the Watergate story, the Halston-designed mask from Truman Capote’s famous Black and White Ball held in her honor and excerpts from a “Living Self-Portrait” interview with Graham and Marc Pachter, former director of the Portrait Gallery. The interview included topics about her role in publishing the Pentagon Papers and the Watergate coverage. It will be available to visitors on a touch-screen video monitor.

Amy Henderson is the curator of “One Life: Katharine Graham.” It is funded by the Guenther and Siewchin Yong Sommer Endowment Fund.

Following this exhibition, the next “One Life” will focus on Ronald Reagan. It opens July 1, 2011, and will coincide with the commemorative events surrounding his 100th birth anniversary.

The Smithsonian’s National Portrait Gallery tells the history of America through the individuals who have shaped its culture. Through the visual arts, performing arts and new media, the Portrait Gallery portrays poets and presidents, visionaries and villains, actors and activists whose lives tell the American story. The National Portrait Gallery is part of the Donald W. Reynolds Center for American Art and Portraiture at Eighth and F streets N.W., Washington, D.C. Smithsonian Information: (202) 633-1000; (202) 633-5285 (TTY). Website: npg.si.edu.