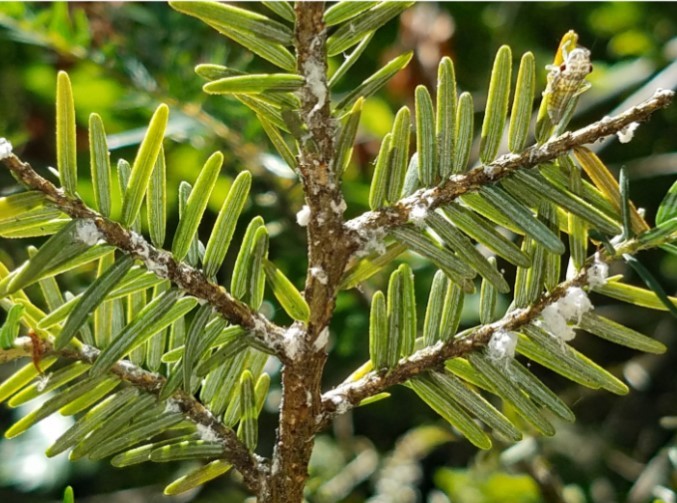 New research from the Smithsonian Conservation Biology Institute (SCBI) and Shenandoah National Park finds that invasive species of forest insects and pathogens contributed to about a quarter of the tree deaths in Virginia’s Blue Ridge Mountain forests in the past three decades.

According to the authors, this is the first study to evaluate the long-term impact of the multiple invasive species affecting forests. The results, published today in the journal Ecosystems, have implications for the protection of forest health and mitigation of climate change.

“As the world struggles with COVID-19, we are becoming increasingly aware that health is globally interconnected—that a disease agent accidentally transferred to a new host can have devastating consequences,” said Kristina Anderson-Teixeira, forest ecologist at SCBI and the Smithsonian Tropical Research Institute and lead author of the study. “We expect more exotic tree disease agents to arrive in the future, and how we handle that threat will have important consequences for the health and diversity of our forests, along with their ability to help sequester carbon dioxide from the atmosphere and slow climate change.”

Non-native insects and pathogens can cause significant harm when brought to a new environment by human activity. In the Blue Ridge Mountain region alone, invasive species have led to the classification of seven tree species as threatened or endangered.

Beyond individual types of trees, however, scientists have not previously studied how invasive species affect entire forests in the long term. For this research, Anderson-Teixeira and her co-authors studied decades of data from forest plots at Shenandoah National Park and the neighboring SCBI. At SCBI, this includes a plot from the Smithsonian’s Forest Global Earth Observatory (ForestGEO), a worldwide network of forest monitoring sites.

The research plots are distributed across an 80-mile stretch of the Blue Ridge Mountains in Virginia. According to the authors, these plots are by no means unusual among forests of the eastern United States, which have all been subjected to multiple invasive species. Scientists have monitored the plots for years to measure the growth, death, abundance and diversity of tree species present. Combined, the records total more than 350,000 tree observations dating from 1987 to 2019.

Anderson-Teixeira and her team focused on the impact of eight invasive species, including insects like the gypsy moth and emerald ash borer, as well as fungi that cause disease in trees. They found that these eight species contributed to substantial increases in tree mortality over the past three decades. Their findings attribute about 25% of tree deaths to non-native insects and pathogens, with at least 22 tree species affected.

The study also reveals the resilience of these forests, however. Despite significant losses to individual tree species, the total number of species present remained relatively constant, and there was no overall reduction in the number and size of the trees. Other tree species compensated for the losses, making the forests stable over the past several decades.

This long-term forest data demonstrates how invasive species have shaped entire ecosystems over time. Despite past resilience, invasive species continue to pose a growing threat to forests, and limiting their spread is important to maintaining the health and diversity of these forests.

Trees also play an important role in climate regulation because they absorb carbon from the atmosphere. The authors say that efforts to limit the spread of invasive species will not only protect the health of forests worldwide, but also aid efforts to slow climate change.

About the Smithsonian Conservation Biology Institute

SCBI plays a leading role in the Smithsonian’s global efforts to save wildlife species from extinction and train future generations of conservationists. SCBI spearheads research programs at its headquarters in Front Royal, Virginia, the Smithsonian’s National Zoo in Washington, D.C., and at field research stations and training sites worldwide. SCBI scientists tackle some of today’s most complex conservation challenges by applying and sharing what they learn about animal behavior and reproduction, ecology, genetics, migration and conservation sustainability.