Jones Created Some of the Most Memorable Cartoon Characters of All Time
March 27, 2014
News Release 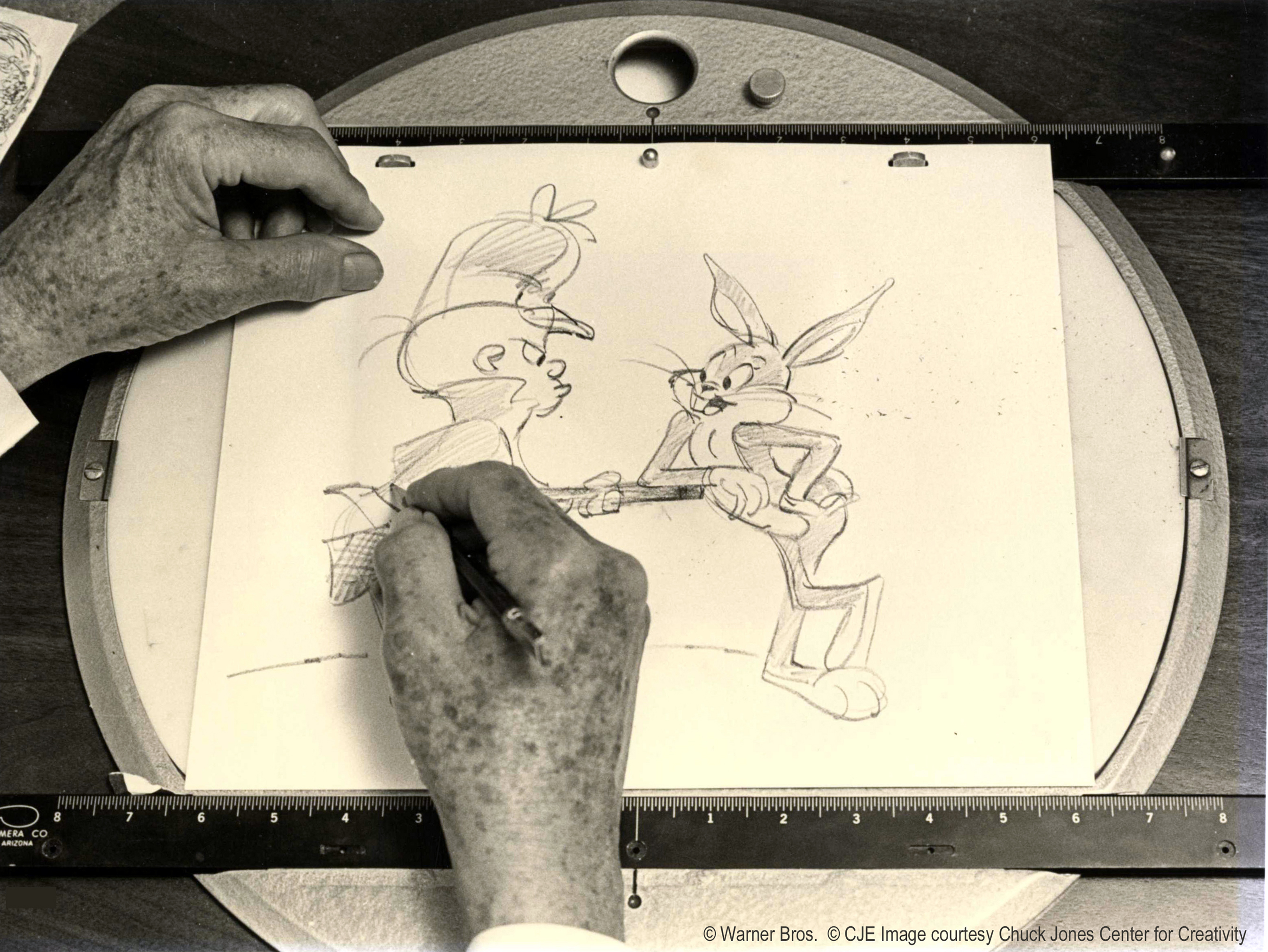 Animation director and artist Charles Martin “Chuck” Jones (1912—2002) brought to life some of the most iconic cartoon characters in animation history. He perfected the wisecracking Bugs Bunny and the exasperated Daffy Duck and created a host of other characters, including Pepé Le Pew, Wile E. Coyote and the Road Runner. He brought an unparalleled talent for comic invention and a flair for creating distinctive, memorable characters to the art of film animation.

“What’s Up, Doc? The Animation Art of Chuck Jones” is a new Smithsonian traveling exhibition that explores Jones’ creative genius, influences and legacy. The exhibition is a partnership between the Smithsonian Institution Traveling Exhibition Service, The Academy of Motion Picture Arts and Sciences, the Chuck Jones Center for Creativity, and the Museum of the Moving Image.

“What’s Up, Doc? The Animation Art of Chuck Jones” will open at the Museum of the Moving Image in New York City July 19. After closing Jan.19, 2015, it will continue on a 13-city tour through 2019. Notable stops along the tour include the EMP Museum in Seattle, The Academy Museum of Motion Pictures in Los Angeles and the Fort Worth Museum of Science and History in Fort Worth, Texas.

“Chuck Jones is one of the enduring geniuses of American comedy, as accomplished in the art of animation as his hero Mark Twain was in literature,” said David Schwartz, chief curator of the Museum of the Moving Image, who curated the exhibition with Barbara Miller, the museum’s curator of the collection and exhibitions. “His work is marked by its ability to convey the distinctive personality of his characters, his endless comic invention and his mastery of timing and visual and verbal humor.”

The exhibition features 23 of Chuck Jones’ animated films and more than 125 original sketches and drawings, storyboards, production backgrounds, animation cels and photographs, demonstrating how Jones and his collaborators worked together to create cinematic magic. The films, shown as large wall projections and on monitors throughout the exhibition, include such classic Warner Bros. cartoons as What’s Opera, Doc? and One Froggy Evening, and the Academy Award®­­-winning short film The Dot and the Line: A Romance in Lower Mathematics, which expanded the boundaries of the medium with its experimental techniques.

Trained as a fine artist, Jones graduated from the Chouinard Art Institute in Los Angeles in 1931. By 1933, he was making cartoons distributed by Warner Bros. Studio. In a career that spanned seven decades, he created more than 300 animated films and received an Academy Award for Lifetime Achievement. After leaving Warner Bros. in 1962, Jones continued to create award-winning films, including collaborations with author Theodore Geisel on the classic television specials Horton Hears a Who! and Dr. Seuss’s How the Grinch Stole Christmas.

SITES has been sharing the wealth of Smithsonian collections and research programs with millions of people outside Washington, D.C., for more than 60 years. SITES connects Americans to their shared cultural heritage through a wide range of exhibitions about art, science and history, which are shown wherever people live, work and play. Exhibition descriptions and tour schedules are available at www.sites.si.edu.

About the Museum of the Moving Image

About The Academy of Motion Picture Arts and Sciences

The Academy of Motion Picture Arts and Sciences is the world’s preeminent movie-related organization, with a membership of more than 6,000 of the most accomplished men and women working in cinema. In addition to the annual Academy Awards—in which the members vote to select the nominees and winners—the Academy presents a diverse year-round slate of public programs, exhibitions and events; acts as a neutral advocate in the advancement of motion picture technology; and, through its Margaret Herrick Library and Academy Film Archive, collects, preserves, restores and provides access to movies and items related to their history. Through these and other activities the Academy serves students, historians, the entertainment industry and people everywhere who love movies.

Designed by architects Renzo Piano and Zoltan Pali, The Academy Museum of Motion Pictures will be located next to the Los Angeles County Museum of Art in the historic Wilshire May Co. building. Slated to open in 2017, the Academy Museum will contain nearly 300,000 square feet of state-of-the-art galleries, exhibition spaces, theaters, screening rooms, education centers and special event spaces.

About The Chuck Jones Center for Creativity

The Chuck Jones Center for Creativity is a not-for-profit 501(c)3 public charity located in Costa Mesa, Calif. Founded in 1999 by four-time Academy Award recipient and legendary animation creator and director, Chuck Jones, the Center’s vision is to inspire the innate creative genius within each person that leads to a more joyous, passionate and harmonious life and world. For more information about The Chuck Jones Center for Creativity, visit http://chuckjonescenter.org.