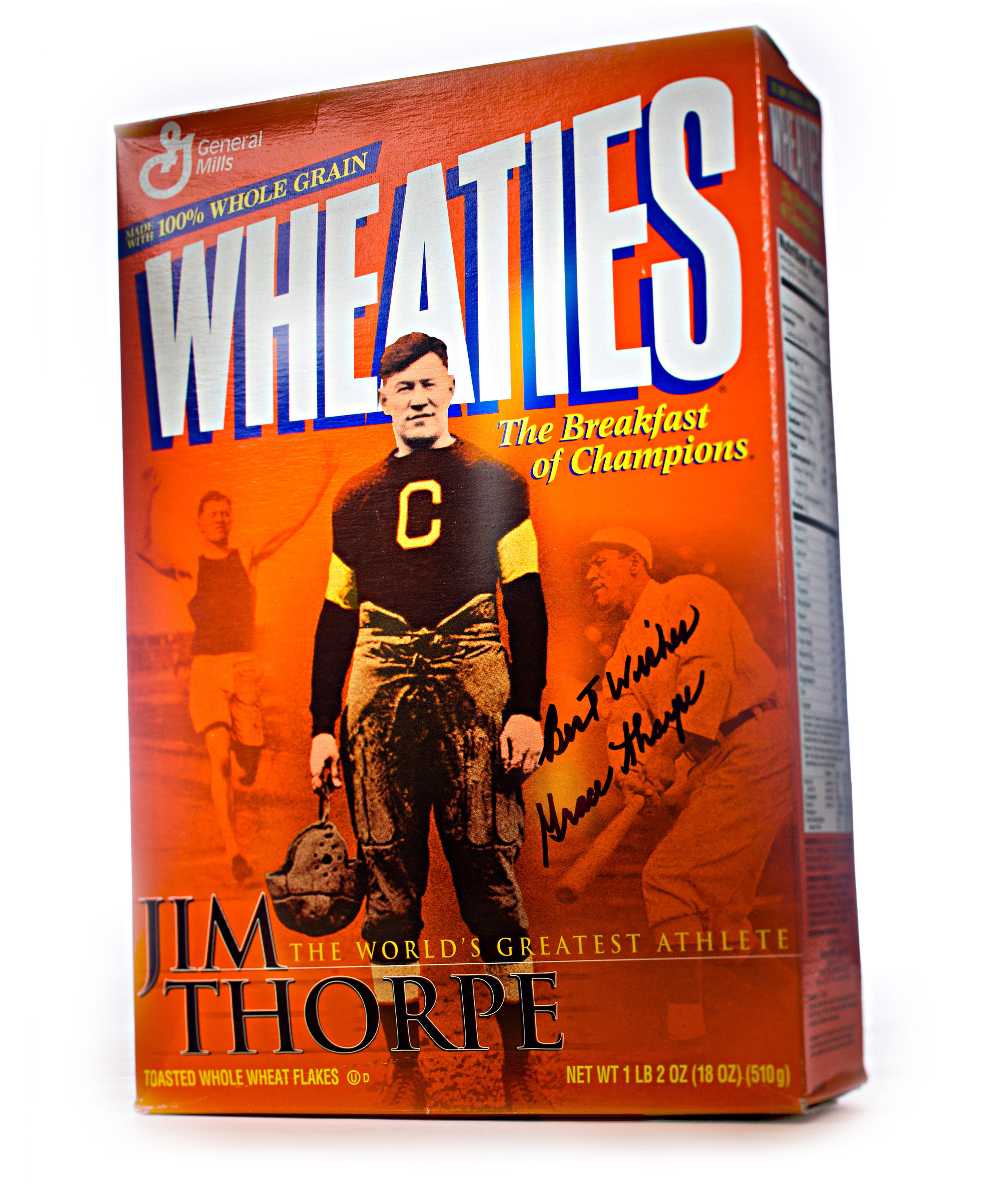 On the 100th anniversary of the Olympic Games in which athletes Jim Thorpe (Sac and Fox), Duke Kahanamoku (Native Hawaiian), Andrew Sockalexis (Penobscot) and Lewis Tewanima (Hopi) represented the United States in Stockholm, the Smithsonian’s National Museum of the American Indian presents “Best in the World: Native Athletes in the Olympics.” The exhibition opens Friday, May 25.

In 1912, Thorpe swept both the pentathlon and decathlon at the Olympic Games, becoming the first and only Olympian to accomplish such a feat and earning the accolades of King Gustav V of Sweden, who proclaimed Thorpe to be “the greatest athlete in the world.” Thorpe was joined that year by fellow Native teammates Kahanamoku, who won the 100-meter freestyle; Sockalexis, who placed fourth in the marathon; and Tewanima, who won the silver medal and set an American record for the 10,000 meters that stood for more than 50 years until Billy Mills (Oglala Lakota) won the gold medal in Tokyo in 1964.

A century later, the National Museum of the American Indian celebrates the legacy of the 1912 team and the path they paved for future generations of Native American athletes, including Clarence “Taffy” Abel (Ojibwe), who won a silver medal as part of the 1924 U.S. Olympic ice hockey team and later became the first U.S.-born player in the National Hockey League; Ellison Myers Brown (Narragansett), who ran the marathon at the 1936 Olympics; Sharon and Shirley Firth (Gwich’in), twin sisters who competed in the 1972, 1976, 1980 and 1984 Games in cross-country skiing; Theoren Fleury (Métis/Cree), who won a gold medal in 2002 in ice hockey, and Carolyn Darbyshire-McRorie (Métis), who won a silver medal in curling in 2010, among others.

A press preview will be held Friday, May 25, at 10 a.m. in the museum’s Sealaska Gallery, where Mills and members of the Thorpe family will be on hand for interviews and photo opportunities.

The exhibition will be on view through Sept. 3 in the museum’s Sealaska Gallery. It will feature the gold medals restored to Thorpe’s family in 1983 for his victory in the 1912 decathlon and pentathlon events. Thorpe’s medals will be on view at the museum through July 9, at which point they will travel to the London 2012 Summer Olympics Games, where they will be celebrated and displayed in front of millions of spectators.

The silver medal that Kahanamoku won in the 1912 Olympics will also be on display, as well as the gold medal won by Mills in the 1964 Games. The exhibition also features historic photographs of Native athletes competing in the Olympics, including rare images from the 1912 Games, and a commemorative Wheaties box that was released in 2001 to honor Thorpe as “The World’s Greatest Athlete.” Smithsonian magazine selected this object as its “National Treasure” in the June/July 2012 issue.

Free public programs related to the exhibition will be offered throughout the exhibition’s run, including a presentation by Mills Saturday, July 14, and a meet-and-greet with Hawaiian surfer and craftsman Tom “Pohaku” Stone Friday, May 25. The museum will also host Stone as an artist-in-residence from Sunday, May 20, through Friday, May 25, during which time he will share his knowledge of ancient Hawaiian sports while carving a traditional Hawaiian surfboard (Papahe’enalu) and sled (Papahōlua) in the Potomac Atrium during regular museum hours.

In June, film screenings will be offered at 12:30 and 3:30 p.m. every day except Wednesday’s in the Rasmuson Theater highlighting Kahanamoku and Thorpe. The 12:30 p.m. film stars Kahanamoku in a 1957 episode of This Is Your Life, the hit television show. The Olympic gold medalist and so-called “Father of Surfing” appeared alongside seven of his siblings, two of whom also competed in the Olympics, former Olympics teammate Johnny Weissmuller, and three of the eight survivors that Kahanamoku rescued from a capsized boat at Newport Beach in 1925. The 3:30 p.m. film, a documentary called Jim Thorpe, The World’s Greatest Athlete, offers an in-depth look at the life of the Native American sports icon, beginning with his boyhood in Indian Territory to his athletic stardom at Carlisle Indian Industrial School, the 1912 Summer Olympics and the tumultuous events that happened afterwards.

The Thorpe medals were lent by the Oklahoma Historical Society, a Smithsonian Affiliate in Oklahoma City, with the support of William and Richard Thorpe. The museum acknowledges Running Strong for American Indian Youth for their sponsorship of this exhibition and the Bishop Museum in Honolulu and Billy Mills for their support. For more information, visit www.AmericanIndian.si.edu.