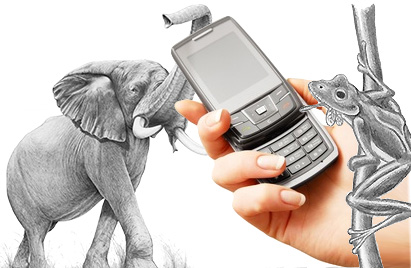 The Smithsonian’s National Zoo has entered the mobile-giving marketplace with its latest “TEXT ELEPHANT” and “TEXT FROG” fundraising campaigns. Aimed at visitors on the go, animal enthusiasts and citizen conservationists, the Zoo’s text-to-give efforts allow people to easily and inexpensively contribute to saving endangered species.

By texting the keyword ELEPHANT or FROG to the number 20222 via a cell phone, a donation of $5 will be made to the Zoo’s conservation programs for elephants and frogs. The $5 donation option runs for a limited time and appears as a charge on a donor’s mobile-phone bill.

“The Zoo’s mobile-giving campaigns were established to raise funds and also reach a new generation of potential donors,” said Dennis Kelly, director of the Zoo. “The campaigns provide an effortless way to donate and support these endangered animals. Anyone can help contribute to the Zoo’s conservation efforts by simply sending a text message.”

Asian elephants are endangered in the wild, where approximately 30,000-50,000 still live in the forests and grasslands of South and Southeast Asia. Their population is shrinking in North American zoos too. The Zoo is committed to the species and has opened the first phase of Elephant Trails, an innovative new home for Asian elephants. For nearly 40 years the Zoo has pioneered efforts to study, understand and protect Asian elephants in the wild and in zoos. The $5 donation will advance conservation of wild Asian elephants through targeted scientific research in Asia and at the Zoo, conservation education programs and training the next generation of elephant experts.

In the biggest extinction event since the time of the dinosaurs, one in three frog species is vanishing because of a deadly disease called chytrid. The Zoo is participating in a mobile-giving campaign for frogs as a partner in the Panama Amphibian Rescue and Conservation Project. The $5 donation helps the rescue project’s efforts to battle chytrid and provide Panamanian frog species a safe haven. Every $5 given will go toward the project’s efforts, like turning a shipping container into a biosecure rescue pod.

*A one-time donation of $5 will be added to the donor’s mobile phone bill or deducted from the donor’s prepaid balance. Messaging and data rates may apply. All charges are billed by and payable to the donor’s mobile-service provider. Service is available on most carriers. Depending on which word texted, donations are collected for the benefit of the National Zoo’s Asian elephant conservation programs or Panama Amphibian Rescue and Conservation Project by the Mobile Giving Foundation and subject to the terms found at www.hmgf.org/t. Donors can unsubscribe at any time by replying STOP to short code 20222; reply HELP to 20222 for help.