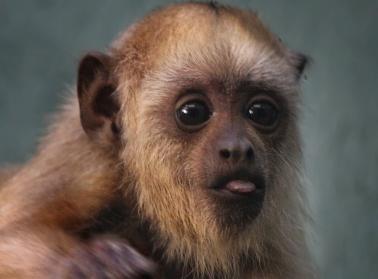 The Smithsonian’s National Zoo is inviting its Facebook fans to answer the call of the wild by naming one of the Small Mammal House’s loudest and most charismatic critters: a baby black howler monkey (Alouatta nigerrima). Starting Monday, June 18, the Zoo is hosting a poll on its Facebook page; fans can vote for their favorite among four names that keepers selected to best reflect the baby’s traits, personality and characteristics.

The name choices are:

Voting will close at noon Friday, June 22—exactly three months after the howler monkey’s birth. The Zoo will announce the winning name on Facebook that afternoon.

Keepers have been monitoring the family at a distance, allowing first-time parents Chula and Pele to bond with their baby. The baby will ultimately help the Zoo learn more about primate development.

Howler monkeys’ thick necks house a unique voice box and an enlarged hyoid bone that enable males to penetrate three miles of dense forest with a single rumbling growl. This warns neighboring competitors to stay away from the leaves, flowers or fruits on which they stake their claim. These booming territorial calls have earned the primates the title of loudest monkey in the New World (North, Central and South America). Visitors can hear Pele howl in response to a recording as part of the animal demonstration program at the Small Mammal House.

The International Union for Conservation of Nature lists black howler monkeys as least concern because populations in their native Bolivia, Brazil, Paraguay and Argentina remain stable.