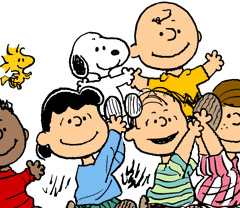 A photograph of “Peanuts” creator Charles M. Schulz (1922–2000) will be presented to the Smithsonian’s National Portrait Gallery in a ceremony for invited guests Oct. 1. The event recognizes the cartoonist’s impact on millions of people worldwide and coincides with commemorations surrounding the 60th anniversary of “Peanuts.” The 1986 photograph, created by acclaimed portraitist Yousuf Karsh, is the Portrait Gallery’s first image of the famed cartoonist. In the image, Schulz is at his drawing board with pen in hand. Before him is a partially completed “Peanuts” full-page comic featuring the perennially popular story line in which Lucy snatches the football away from Charlie Brown and sends him hurtling through the air. The photograph, with the accompanying original comic strip, will be on view to the public immediately following the ceremony in the museum’s “New Arrivals” exhibition.

“The Portrait Gallery has many editorial cartoonists and their cartoons in its collection, but this is the first of Charles Schulz and his adored characters,” said Martin Sullivan, director of the museum. “Schulz dealt with life’s everyday moments with humanity and humor.”

On Saturday, Oct. 2, the museum will host a friends-and-family day for all ages with programs inspired by the cartoonist and his characters. Snoopy will be available for photographs; Joe Wos, cartoonist in residence at the Schulz Museum in Santa Rosa, Calif., will offer workshops throughout the day; and Sean Lane and the Bay Jazz Project will provide musical entertainment. Children will be invited to join the band to play percussion instruments. Later in the day, the museum will screen the popular “Peanuts” special It’s the Great Pumpkin, Charlie Brown. Lee Mendelson, a longtime friend of Schulz and executive producer of all the classic “Peanuts” specials, including Great Pumpkin and A Charlie Brown Christmas, will be on hand for a discussion and to answer questions from fans.

The Smithsonian’s National Museum of American History will also mark the 60th anniversary of the “Peanuts” strip with a case that will feature objects from Schulz, including drawing utensils, an animation cell from the television special It’s the Great Pumpkin, Charlie Brown and two comic panels that show the cartoon’s progression from rough pencil sketches to finished ink strips.

Schulz once described himself as “born to draw comic strips.” A Minneapolis native, he was just two days old when an uncle nicknamed him “Sparky,” after the horse Spark Plug from the “Barney Google” comic strip. Throughout his youth, he and his father shared a Sunday-morning ritual of reading the funnies. After serving in the army during World War II, Schulz got his first big break in 1947 when he sold a cartoon feature called “Li’l Folks” to the St. Paul Pioneer Press. In 1950, Schulz met with United Feature Syndicate, and on Oct. 2 of that year, “Peanuts,” so named by the syndicate, debuted in seven newspapers. Schulz died in Santa Rosa, Calif., Feb. 12, 2000—just hours before his last original strip was to appear in Sunday papers.

“Peanuts,” one of America’s most beloved comic strips, ran without interruption for nearly 50 years. Encores of the comic strip appear today in more than 2,200 newspapers in 75 countries and 21 languages. “Peanuts” animated specials have become seasonal traditions, and thousands of consumer products are available. Charlie Brown kicking the football, Linus and his blanket and Lucy leaning over Schroeder’s piano are images to which everyone can relate. Phrases such as “security blanket” and “good grief” are a part of the global vernacular.

The photograph of Schulz has been donated to the National Portrait Gallery by Estrellita Karsh, in memory of Yousuf Karsh. The portrait presentation and family day are possible through Edwin C. and Jeanne Anderson.