Just Ahead of the 50th Anniversary of the “March on Washington”
April 22, 2013
News Release
Share Icon
Print 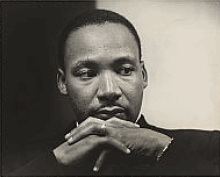 Under the leadership of Martin Luther King Jr., non-violent protest became the defining feature of the modern civil rights movement in America. The Smithsonian’s National Portrait Gallery will open an exhibition recognizing King’s extraordinary impact on American civil rights June 28. “One Life: Martin Luther King Jr.” will mark the 50th anniversary of the “March on Washington for Jobs and Freedom” and King’s stirring “I Have a Dream” speech, which took place Aug. 28, 1963. Through historic photographs, prints, paintings and memorabilia—chosen principally from the Portrait Gallery’s collection—this one-room exhibition will trace the trajectory of King’s career, from his rise to prominence as the leader of the national civil rights movement to his work as an anti-war activist and advocate for those living in poverty.

“The story of civil rights in America is inseparable from Martin Luther King Jr.,” said Kim Sajet, director of the National Portrait Gallery. “This focused exhibition on Dr. King captures the galvanizing effect he had on the nation through non-violent protest.”

A brilliant strategist, King first demonstrated the power of passive resistance in 1955, while helping to lead the prolonged bus boycott in Montgomery, Ala., that succeeded in dismantling bus segregation laws. Fresh from the victory that brought him national recognition, the charismatic King cofounded the Southern Christian Leadership Conference and took the lead in directing its civil rights initiatives. In a carefully orchestrated campaign of peaceful protest to expose and defeat racial injustice, King awakened the nation’s conscience and built support for the landmark civil rights legislation of the 1960s.

The exhibition includes photographs documenting significant moments in King’s career. One shows King and Rosa Parks at a mass meeting during the Montgomery bus boycott, another pictures King and Ralph Abernathy as they ride the first integrated bus in Montgomery and another represents King witnessing President Lyndon B. Johnson’s signing of the Civil Rights Act of 1964. The exhibition also features commemorative buttons and the program from the “March on Washington,” the original art created for the Time cover when the magazine named King “Man of the Year” and two issues of Life magazine covering his assassination and funeral.

The exhibition will include video segments from the CBS news coverage of the “March on Washington.”

The sole media partner for “One Life: Martin Luther King Jr.” is The Atlantic. In 1963, just months before the March on Washington, The Atlantic published what would come to be known as King’s “Letter from Birmingham Jail,” a handwritten draft he wrote behind bars and sent to the magazine.

The curator of this exhibition is National Portrait Gallery senior curator of photographs, Ann Shumard.

The National Portrait Gallery’s “One Life” room has focused on the lives and influence of Katharine Graham, Abraham Lincoln, Sandra Day O’Connor, Thomas Paine, Elvis Presley, Ronald Reagan and Walt Whitman. Currently, the room is focused on the career of Amelia Earhart.

The Smithsonian’s National Portrait Gallery tells the history of America through the individuals who have shaped its culture. Through the visual arts, performing arts and new media, the Portrait Gallery portrays poets and presidents, visionaries and villains, actors and activists whose lives tell the American story.The National Portrait Gallery, part of the Donald W. Reynolds Center for American Art and Portraiture, is located at Eighth and F streets N.W., Washington, D.C. Smithsonian Information: (202) 633-1000. Website: npg.si.edu.