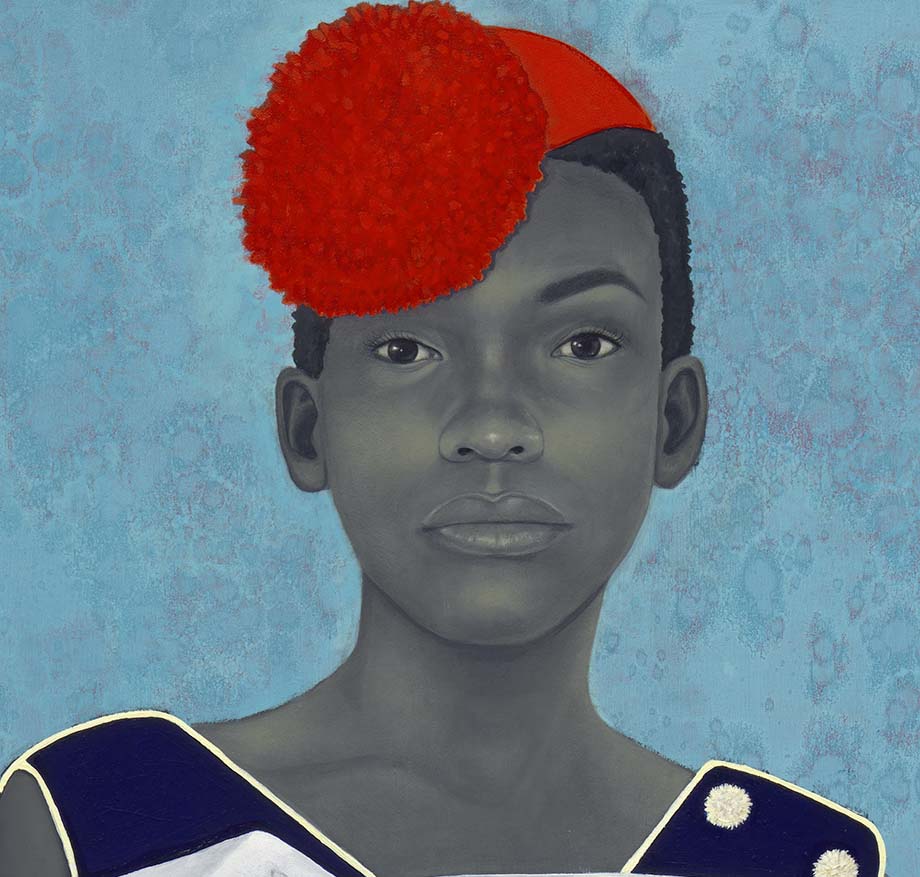 The Smithsonian’s National Portrait Gallery announced that Amy Sherald of Baltimore has received first prize in the Outwin Boochever Portrait Competition 2016 for an oil on canvas titled “Miss Everything (Unsuppressed Deliverance).” The painting and 42 other works will be in the museum’s exhibition “The Outwin 2016: American Portraiture Today” from March 12 through Jan. 8, 2017.

Sherald will receive $25,000 and a commission to create a portrait of a living individual for the museum’s permanent collection.

Second prize was awarded to Cynthia Henebry of Richmond, Va., who submitted an inkjet print titled “Mavis in the backseat.” Third prize went to Joel Daniel Phillips of Oakland, Calif., for his charcoal-and-graphite drawing “Eugene #4.” Commended artists are Jess T. Dugan from St. Louis, for her self-portrait photograph; Jessica Todd Harper from Merion Station, Pa., for her pigment print photograph “Becky, June, Jessica and Mary”; Sedrick Huckaby of Fort Worth, Texas, for his self-portrait painting “Sedrick, Sed, Daddy”; and Daniel James McInnis of Perrysburg, Ohio, for his inkjet print “Heidi and Lily, Ohio 2014.” Each will be awarded a cash prize.

“‘The Outwin 2016: American Portraiture Today,’ showcases our national conversations from the past three years,” said Kim Sajet, director of the National Portrait Gallery. “These works not only are geographically diverse, they also reflect discussions around gender, race, poverty, healthcare, at-risk youth, migration and the power of family. These pieces are powerful in this regard because each displays an intimate connection between the artists and their sitters.”

From across the nation, 43 artists’ works were chosen for display in the exhibition from more than 2,500 entries in a variety of visual-arts media. Submissions included digital animation and video, large-scale drawings, prints, photographs and textiles, as well as painted and sculpted portraits.

The selected finalists mark a turning point in advancing American contemporary portraiture. The jurors considered this exhibition a synopsis of historical and cultural events that have unfolded in the past three rounds, particularly in terms of race, sexual identity, gender and concerns about protecting childhood in an age of technology and gun violence.

In addition, one exhibiting artist will win the People’s Choice Award, which will be announced Sept. 20. In this part of the competition, visitors to the exhibition, both online and in the gallery, will be able to cast a vote for their favorite of the finalists.

The exhibition will be accompanied by a publication illustrating each of the 43 finalists’ works. It will be available in the museum store for $14.95.

Held every three years, the Outwin Boochever Portrait Competition is made possible by a gift from volunteer and benefactor Virginia Outwin Boochever (1920–2005). The competition invites artists all over America to investigate the art of contemporary portraiture. The resulting exhibition celebrates excellence and innovation, with a strong focus on the variety of portrait media used by artists today.

After the exhibition closes in Washington, D.C., it will travel for the first time to three host museums across the country from February 2017 through January 2018.

The National Portrait Gallery is part of the Donald W. Reynolds Center for American Art and Portraiture at Eighth and F streets N.W., Washington, D.C. Smithsonian Information: (202) 633-1000. Website: npg.si.edu. Connect with the museum at @NPG, Facebook, YouTube, Instagram and Tumblr.

*Denotes artists who were selected for the short list.