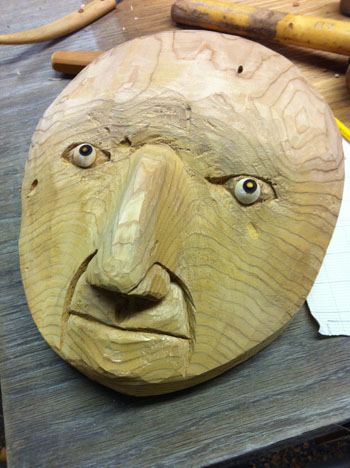 The Smithsonian’s National Museum of the American Indian has commissioned a monumental outdoor sculpture by Oregon artist Rick Bartow (Wiyot/Mad River Band). The pair of wood carvings will act as key welcoming sentinels on the northwest corner of the museum overlooking the National Mall in Washington, D.C. Titled “We Were Always Here,” the work will be officially dedicated on the autumn equinox, Friday, Sept. 21, at 5:30 p.m.

“We are honored to add these unique sculptures to our collection and our landscape,” said Kevin Gover (Pawnee), the museum’s director. “By greeting our visitors with indigenous imagery using traditional and natural resources, these works represent everything our museum stands for.”

Carved using old-growth western red cedar from Washington state, Bartow’s sculptures represent traditional animals from the region’s indigenous creation stories. As Bartow explains: “The Welcoming Bear and Raven, Healer and Rascal sit atop the sculpture poles; one, slow and methodical, fiercely protective of her children, the other a playful, foible-filled teacher of great power. Both Bear and Raven are focused on water and salmon for serious reasons. The salmon reflect the health of the environment, in particular water, the source of all life. On each pole are repeated lower horizontal patterns that symbolize successive waves, generations following generations, an accumulation of wisdom and knowledge. The tree used for the sculptures is approximately 500 years old. The elders say that the power of the sun is stored within the tree. Essentially the tree embodies the fundamental elements of Earth, Air, Fire and Water, our sacred and precious natural resources.”

The sculptures are in progress in Bartow’s Newport, Ore., studio, a short walk from the Pacific Ocean. All elements of the sculptures are western red cedar, the most insect- and rot-resistant indigenous tree in North America. The pair of carvings originates from the split halves of the massive, old-growth tree. Preparation of the wood includes removing the soft outer layers and the dense central heart-wood to reduce splitting. The sculptures are being carved as they lay flat on enormous supports. They will not be upright until mounted in the museum’s indigenous landscape. Intricately locking mortise-and-tenon joints will secure the large bear, raven and salmon carvings onto each pole, both of which also feature Port Orford cedar, oak and maple dowels, salvaged old-growth Douglas fir as well as legally harvested abalone for the eyes in Raven and Bear. The works will be completed this summer, driven across the continent and installed in the garden for year-round public viewing.

The new sculpture will be dedicated at the museum on the autumn equinox, Friday, Sept. 21, at 5:30 p.m. The public ceremony will also commemorate the eighth anniversary of the opening of the museum in Washington, D.C. The dedication will begin with a blessing and song from painter and poet Frank LaPena (Maidu/Wintu). On Saturday, Sept. 22, the museum will host a drawing workshop with Bartow at 11 a.m., Wiyot Brush Dancers performances at 1 p.m. and 3 p.m. and a performance of Rick Bartow’s blues/folk-rock band, The Backseat Drivers, at 5:30 p.m. in the Potomac Atrium. On Sunday, Sept. 23, the Wiyot Brush Dancers will perform again at 1 p.m. and 3 p.m.

The National Museum of the American Indian is the 18th museum of the Smithsonian Institution. It is the first national museum dedicated to the preservation, study and exhibition of the life, languages, literature, history and arts of Native Americans. Established by an act of Congress in 1989 (amendment in 1996), the museum works in collaboration with the Native peoples of the Western Hemisphere to protect and foster their cultures by reaffirming traditions and beliefs, encouraging contemporary artistic expression and empowering the Indian voice.