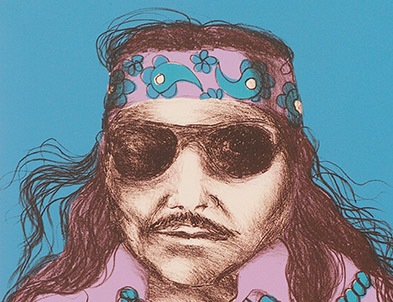 The Smithsonian’s National Museum of the American Indian will open “R.C. Gorman: Early Prints and Drawings, 1966–1974,” an exhibition of 28 drawings and lithographs by internationally renowned Navajo artist R.C. Gorman Jan. 13, 2011. The exhibition will represent his early work with the female form and the Indian “madonnas” that later brought him global acclaim. The exhibition will remain on view in the second-level Sealaska Gallery through May 1, 2011.

“Gorman’s earlier work is revisited in this exhibition and reveals his facile hand and sensitive approach to the human form as well as his lesser-known explorations of Navajo textile designs,” said associate curator Kathleen Ash-Milby (Navajo), who organized the original exhibition at the museum’s George Gustav Heye Center in 2006.

Gorman (1931–2005) was known for his iconic imagery of Navajo women. The exhibition includes several nudes such as the oil pastels “Sleep,” which depicts a peacefully reclining nude, and “Navajo Woman Drying Her Hair,” a bold image of a standing woman touching her hair.

The museum’s exhibition also includes a rare self-portrait that features the headband that became Gorman’s trademark, along with sunglasses and breaking beads that Ash-Milby interprets as foreshadowing the artist’s emerging celebrity status and jet-set lifestyle. His art was admired and collected by several famous Americans, including Jackie Onassis, Gregory Peck, Elizabeth Taylor and Andy Warhol. “Navajo Mother in Supplication” (1966), Gorman’s first foray into printmaking under the tutelage of master printer José Sanchez in Mexico City, features an intimate image of a mother leaning over to gently kiss an infant.

A four-color lithographic print titled “Yei-bi-chai” (1974) was created for his solo exhibition, a first for a living Native artist, at the Museum of the American Indian—Heye Foundation in 1975. It was the first in a long series of popular poster prints, fulfilling Gorman’s desire to make art that was both accessible and affordable, especially to the Navajo community.

“R.C. Gorman was one of the most influential artists of his time and his favorite subject—strong Native women—is well represented in this exhibition,” said Kevin Gover (Pawnee), director of the museum. “But you also can find some insight into his other work with the human form as well as the color and abstraction of Navajo weavings.”

Gorman’s prolific art career included bronze sculpture, oil pastels, ceramics, printmaking, paper castings and even tapestries. His work was commercially successful and reproduced widely on note cards, calendars, posters and other merchandise. He established the first Native-owned fine art gallery in historic Taos, N.M., in which he worked and lived for several decades. His work can be found in several national museum collections, including the Heard Museum in Phoenix, Ariz., the Santa Fe Fine Arts Museum in New Mexico, the Metropolitan Museum of Art in New York City and the Indianapolis Museum of Art in Indiana.

The prints and drawings in this exhibition are part of the Indian Arts and Crafts Board Collection, U.S. Department of the Interior, at the Smithsonian’s National Museum of the American Indian.