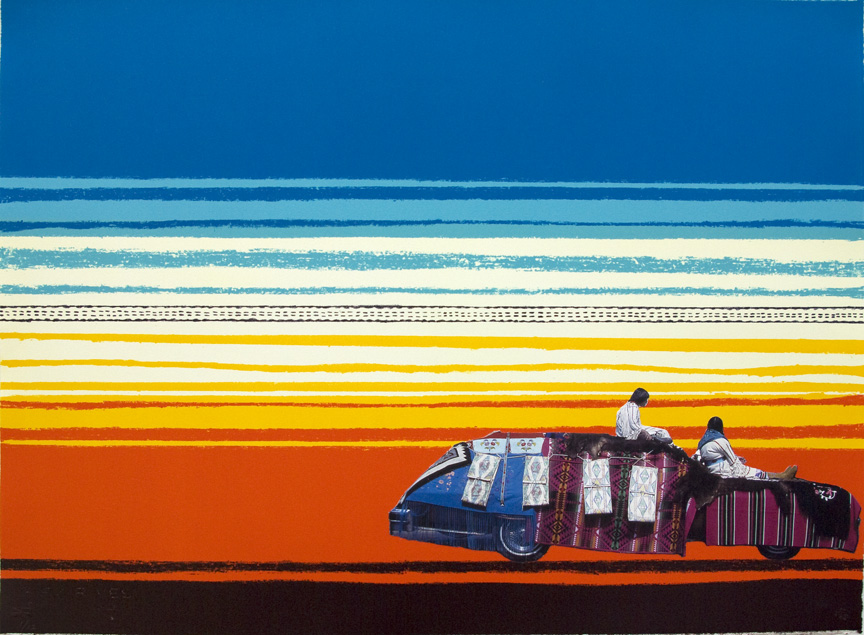 Nestled in the foothills of Oregon’s Blue Mountains, Crow’s Shadow Institute of the Arts has been a gathering place for contemporary artists since 1992, drawing Native and non-Native artists from around the world to its state-of-the-art printmaking studio, Crow’s Shadow Press. Its goal is to provide opportunities for Native Americans through artistic development.

Lavadour, one of the exhibition’s featured artists, was among several to found Crow’s Shadow Institute of the Arts in a historic mission schoolhouse on the Umatilla Indian Reservation. Today, the space is home to workshops on traditional art forms of the Plateau region, such as basketry, beadwork and horse regalia, as well as marketing, copyright law and other practical subjects. Crow’s Shadow also provides artist residencies alongside master printer Frank Janzen, where artists can draw inspiration from the serenity and beauty of its rural setting. The prints in “Making Marks” were collaborations between Janzen and visiting artists; they are part of the Crow’s Shadow permanent collection.

Located at One Bowling Green in Manhattan, the museum is located within the historic Alexander Hamilton U.S. Custom House, a National Historic Landmark built in 1907. The museum’s permanent and temporary exhibitions—as well as a range of public programs, including music and dance performances, films, and symposia—explore the diversity of the Native people of the Americas. For more information, visit www.AmericanIndian.si.edu.