Visitors Can Meet the Voyagers of the Hawaiian Outrigger Canoe Hōkūle‘a on its Stop in Washington During Its Worldwide Voyage; Programs Include a Weekend Festival Featuring Food, Music, Films and a Pop-Up Planetarium
May 5, 2016
News Release 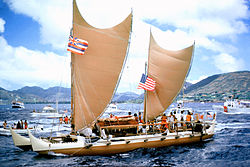 The Smithsonian’s National Museum of the American Indian in Washington, D.C., brings the Pacific world into focus with programs dedicated to the Native people and culture of Hawai‘i. Inspired by the May 2016 scheduled stop of the Hawaiian outrigger canoe Hōkūle‘a in the nation’s capital, 24,000 miles into its worldwide voyage that began in May 2014. A film series and weekend festival will celebrate traditional Polynesian wayfinding, as revived and practiced by the Polynesian Voyaging Society.

In celebration of the arrival of the Hōkūle‘a into local waters at Alexandria, Va., four documentary programs reveal the history of the Polynesian Voyaging Society, the building of the Hōkūle‘a and the subsequent resurgence of ocean voyaging in the Hawaiian community as a result. The film series, Ma Ke Ala O Nā Kūpuna, will take place May 13–16 in the Rasmuson Theater; all screenings begin at noon. The films are The Navigators: Pathfinders of the Pacific, directed by Sam Low and Boyd Estus May 13; Papa Mau: The Wayfinder, directed by Nā‘ālehu Anthony (Native Hawaiian) May 14; Stories from Mālama Honua Worldwide Voyage, a selection of videos from the crew of the Hōkūle‘a and its accompanying canoe Hikianalia May 15; and Voyage: Ola I Ke Au A Kanaloa May 16. Films screened May 14–16 will be followed by a Q&A sessions with their respective directors.

Dinner and a Movie

The festival begins Friday, May 27, at 7 p.m. with a special screening of the film Visions in the Dark: The Life of Pinky Thompson, in the Rasmuson Theater. Directed by Ty Sanga (Native Hawaiian), this film documents the extraordinary life of activist and leader Myron “Pinky” Thompson (Native Hawaiian) who fought hard to dispel the stigma of Native Hawaiians as inferior. His legacy lives on through his work as a social worker and community leader, including leadership posts at Kamehameha Schools and the Polynesian Voyaging Society.

Cuisine from the museum’s Zagat-rated Mitsitam Café will be available for purchase beginning at 5:45 p.m. Seats in the theater are limited and available on a first-come, first-served basis.

The Mālama Honua: Hōkūle‘a World-Wide Voyage Celebration is a weekend-long festival taking place Saturday, May 28, and Sunday, May 29, from 10 a.m. to 5 p.m. each day. The program will be a unique opportunity to meet the navigators and crew from the voyage, to enjoy music by Robert Cazimero and Hālau Na Kamalei, and to experience a special “pop-up” planetarium collaboration with the ‘Imiloa’s Astronomy Center and other hands-on activities. The festival is supported by the Office of Hawaiian Affairs.

“E Mau Ke Ea: The Sovereign Hawaiian Nation” is on view through January 2017 in the second-floor Sealaska Gallery. To explain the Hawaiian sovereignty movement of present day, the exhibition covers the history of Hawai‘i from the arrival of early Polynesian seafarers and the development of a cluster of independently ruled chiefdoms, to the unification of the Kingdom of Hawai‘i by Kamehameha the Great in 1812. Following the unification, the overthrow of the Hawaiian monarchy by a small group of non-Hawaiians backed by U.S. diplomats and naval forces in 1893 left Native Hawaiians to contend with American rule since 1900. Visitors will leave the exhibition with a richer understanding of the internationally recognized sovereign status of the Kingdom of Hawai‘i—embracing western innovations while maintaining its Polynesian identity—and the legal basis for the contemporary Hawaiian sovereignty movement.