Enlivens the Alliance Between the Oneida Indian Nation and the U.S. During the American Revolution
March 12, 2018
News Release 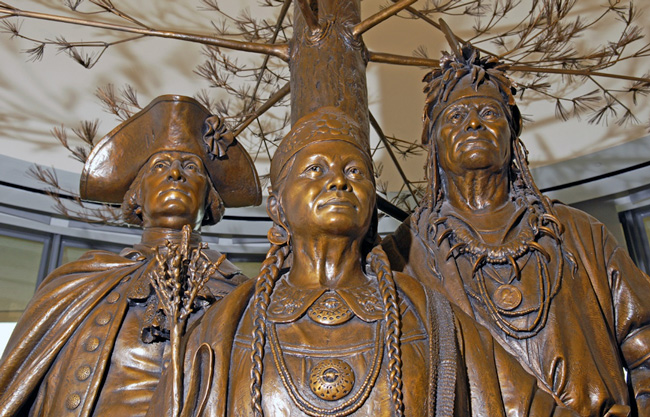 The Smithsonian’s National Museum of the American Indian will dedicate new enhancements to “Allies in War, Partners in Peace,” a monumental bronze sculpture—already a visitor favorite—that commemorates the alliance between the Oneida Indian Nation and the United States during the American Revolution. The dedication will take place Thursday, March 15, at 10 a.m. With the Oneida Nation’s continued support, the museum has recently installed an interpretive surround, enhancing the storytelling of the historic alliance with light, sound and projected imagery.

The Oneida Indian Nation donated the bronze statue to commemorate the opening of the museum. Created by Edward Hlavka from St. George, Utah, “Allies in in War, Partners in Peace” stands 20 feet tall and weighs 1,925 pounds. George Washington stands alongside the Oneida diplomat, Oskanondonha, or Skenandoah, and Polly Cooper—an Oneida woman who came to the aid of Washington’s troops at Valley Forge in 1777–78.

“With the Oneida’s gift, the Smithsonian’s National Museum of the American Indian is able to animate this story in a compelling way for our visitors,” said Kevin Gover, director of the museum. “We are ever grateful for their generosity.”

“This enhanced interpretation provides an immersive experience for visitors to understand this country’s rich history, so that there is a deeper understanding of the nuance, texture and depth of that history—an understanding that goes beyond the two-dimensional stories that too often oversimplify how this great country was founded,” said Ray Halbritter, Oneida Indian Nation representative and Nation Enterprises CEO. “This exhibit commemorates the friendship that was forged between the Oneida Nation and the United States during the Revolutionary War, as well as the incredible sacrifices made by our ancestors during the founding of our country.”

Visitors will also learn about Cooper, who chose to stay with the American army and cooked and cared for the sick and suffering soldiers. The Oneida’s historical generosity continues to this day.

More than 125 specialty lights illuminate the myriad symbols incorporated in the statue. Six digital projectors wash the curved walls of the fourth-floor alcove with images of the indigenous landscape filled with flora and fauna, then battle scenes of the Oneida and Americans fighting the British side-by-side and visions of hope for the future. Incorporated in the space is an induction hearing loop and T-coil infrared assistive listening system.