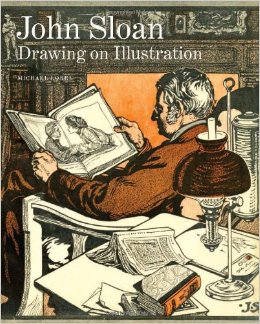 The Smithsonian American Art Museum has awarded the Charles C. Eldredge Prize for Distinguished Scholarship in American Art to Michael Lobel for his book John Sloan: Drawing on Illustration (Yale University Press, 2014). The jurors cited the meticulous research and exceptionally high quality of prose of the book. Sloan’s early work in illustration has frequently been treated as a precursor to his mature career as a painter or printmaker, but Lobel restores the intellectual and visual seriousness to these works that the artist intended.

The three jurors who awarded the $3,000 prize were Gwendolyn DuBois Shaw, associate professor of American art at the University of Pennsylvania; Jessica May, chief curator at the Portland Museum of Art, Maine; and Kevin Murphy, Eugénie Prendergast Curator of American Art at the Williams College Museum of Art.

The jurors wrote: “Drawing on Illustration provides a radical rethinking of Sloan’s career by demonstrating the artist’s consummate skill in blending image, idea and technique. In so doing, Lobel substantively shifts our understanding of the art history of early 20th-century America. He shows that far from simply picturing the city and metropolitan lives, Sloan contributed to the construction of urban visual culture, disseminating his work far and wide. It is a timely book that could not have been written any number of years ago; it belongs to now with its attention to dramatic technological change, to the unsteady relationship between culture and politics, to the circulation of images through mass media, and to shifting hierarchies of value. The book is a call to action: Many of Sloan’s Ashcan peers and contemporaries could be looked at productively through the lens that Lobel provides.”

Lobel is professor of art history at Hunter College in New York City. He has written several books, including Image Duplicator: Roy Lichtenstein and the Emergence of Pop Art (Yale University Press, 2002) and James Rosenquist: Pop Art, Politics and History in the 1960s (University of California Press, 2009) and has contributed numerous essays for exhibition catalogs and articles for such publications as Art Journal, Artforum, Art in America and Art Bulletin. He has received grants and fellowships from the Getty Research Institute, the Henry Luce Foundation/American Council of Learned Societies and the Terra Foundation for American Art. Lobel is a member of the board of directors of the Roy Lichtenstein Foundation, and he currently is working with the Whitney Museum of American Art on programming designed to teach the public how to look at art. He will present the annual Eldredge Prize lecture, which is free and open to the public, Thursday, Oct. 27, at 4 p.m. in the museum’s McEvoy Auditorium.

The Eldredge Prize, named in honor of the former director of the museum (1982–1988), is sponsored by the American Art Forum, a patrons’ support organization. This annual award, initiated in 1989, recognizes originality and thoroughness of research, excellence of writing and clarity of method. Single-author, book-length publications in the field of American art history appearing within the three previous calendar years are eligible. Dec. 1 is the deadline for next year’s nominations.

Recent Eldredge Prize recipients include Amy Lyford (2015) for her book Isamu Noguchi’s Modernism: Negotiating Race, Labor, and Nation, 1930–1950 and Wendy Bellion (2014) for her book Citizen Spectator: Art, Illusion, and Visual Perception in Early National America. A complete list of past winners is available online at americanart.si.edu/research/awards/eldredge/winners.