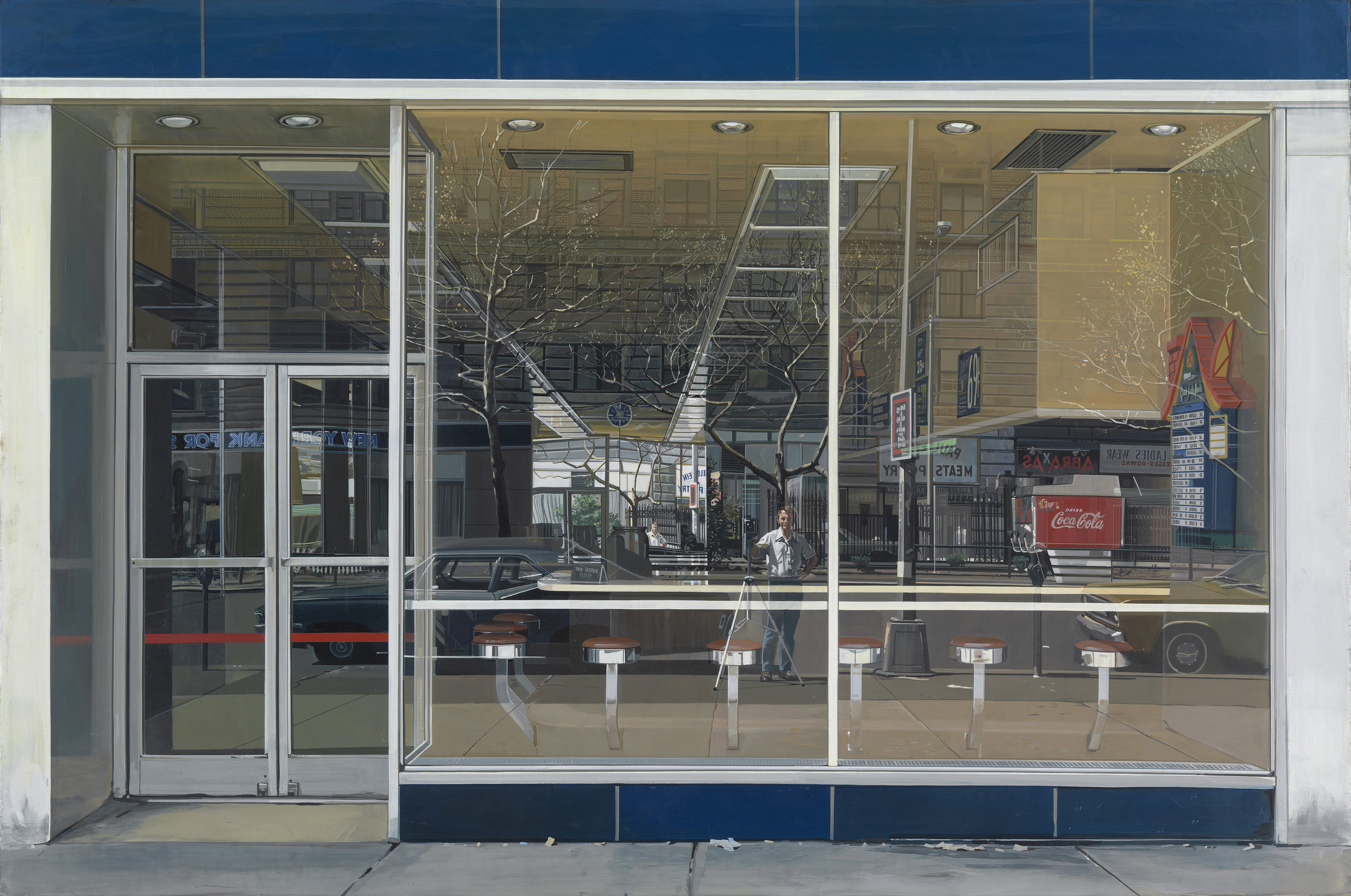 “Richard Estes’ Realism” is the most comprehensive exhibition of Estes’ paintings ever organized. A master of contemporary realism, Estes is primarily known as a painter of urban scenes. The exhibition features 46 paintings spanning a 50-year career, including a number of works from private collections that are rarely seen publically. The exhibition also shows, for the first time, Estes’ panoramic landscape paintings and water scenes alongside his more famous cityscapes, offering new insights into Estes’ particular vision.

“American audiences are long overdue for a careful reassessment of Richard Estes’ work,” said Betsy Broun, The Margaret and Terry Stent Director of the Smithsonian American Art Museum. “His paintings are rewardingly inexhaustible, and each viewing yields new discoveries.”

The exhibition is the first complete overview of Estes’s work in the U.S. since 1978. It explores the full range of Estes’ career as a painter, with works from the late 1960s to 2013. Paintings in the exhibition balance Estes’ interest in cities—London, New York, Paris, Tokyo—with luminous sunlit scenes of Venice and Antarctica as well as his explorations of the Maine coast and the woods on Mount Desert Island, where he has spent part of each year since the late 1970s. Recently, Estes has captured nocturnal images of New York City, and several examples are on display. A number of Estes’ rare portraits and self-portraits also are included in the exhibition.

“Estes is a master of contemporary realism whose sharply focused technique goes beyond the photograph to create complex constructions of light, reflection and perspective,” said Mecklenburg.

Part of Estes’ unmistakable singularity has to do with the fact that he has been making his own photographs since he was a young boy. Estes’ compositions—amalgamations of the multiple photographs he takes for each composition—are dramatic and complex to the point of abstraction. He layers and merges multiple viewpoints to create dense and detailed scenes that reward the viewer with careful looking. His images are more sophisticated than they appear to be at first glance.

“I think of the photograph as a sketch to be used, not a goal to be reached,” said Estes.

Though figures are often present in his work, they are—like most passersby in public spaces—anonymous and uncommunicative. His seemingly effortless technical finesse captures the intricate geometries of the city, the subtle contours and nuanced tones of natural landscapes and the shimmering fluidity of water. Estes’ realism is a compelling record of the appearance of urban and natural environments in the late 20th and early 21st century.

Estes is considered the foremost practitioner of the international group of artists known loosely as photorealists and has been celebrated for more than 45 years as one of the premier painters of American cityscapes. Born in 1932 and raised in central Illinois, Estes studied at the School of the Art Institute of Chicago from 1952 to 1956. In 1958, he moved to New York City, where he has lived ever since. For several years, he worked in commercial publishing and advertising as a paste-up, layout and illustration artist. In the mid-1960s, Estes began to paint from his own photographs, developing paintings that are rooted in Dutch, Venetian and American representations of urban architecture. In 1978, the Museum of Fine Arts in Boston organized the first major career survey of his work. Estes’ work has been shown frequently by the Marlborough Gallery and the Allan Stone Gallery, and solo exhibitions have toured Europe and Asia.

The museum is offering a cell phone audio tour in the exhibition galleries, with commentary by Broun, Estes, May, Sims and Mark Bessire, director at the Portland Museum of Art.

“Richard Estes’ Realism” is accompanied by a catalog with essays on Estes by Sims and May. The book also includes a detailed chronology by independent art historian Helen Ferrulli. It is published by the Portland Museum of Art and the Smithsonian American Art Museum, and distributed by Yale University Press. The book is for sale in the museum’s store ($40, softcover).

To celebrate the opening of the exhibition, Sims will discuss the life and work of Estes, followed by a conversation with the artist Friday, Oct. 10, at 6 p.m. in the museum’s McEvoy Auditorium; this program will be webcast live on the museum’s website. May will return to the museum for a gallery talk highligting Estes’ use of photography Tuesday, Dec. 9, at 5:30 p.m. A gallery talk with Broun and Mecklenburg in the exhibition galleries is scheduled for Thursday, Jan. 7; registration is required at estes.eventbrite.com. For additional information about programs, the public may visit americanart.si.edu/calendar.

“Richard Estes’ Realism” is organized by the Smithsonian American Art Museum and the Portland Museum of Art, Maine. The museums thank the following donors for their generous support of the exhibition: Gabrielle Bekink and the Honorable Rudolf Bekink, Isabelle and Scott Black, The Wolf Kahn & Emily Mason Foundation, Thelma and Melvin Lenkin, The Lunder Foundation—Peter and Paula Lunder, Elizabeth Ragland Park Fund of Triangle Community Foundation, Debbie Frank Petersen, the Walter and Lucille Rubin Foundation, Holly and Nick Ruffin and John Wilmerding. The accompanying catalog is supported by Furthermore: a program of the J.M. Kaplan Fund, Marlborough Gallery and the Wyeth Foundation for American Art.