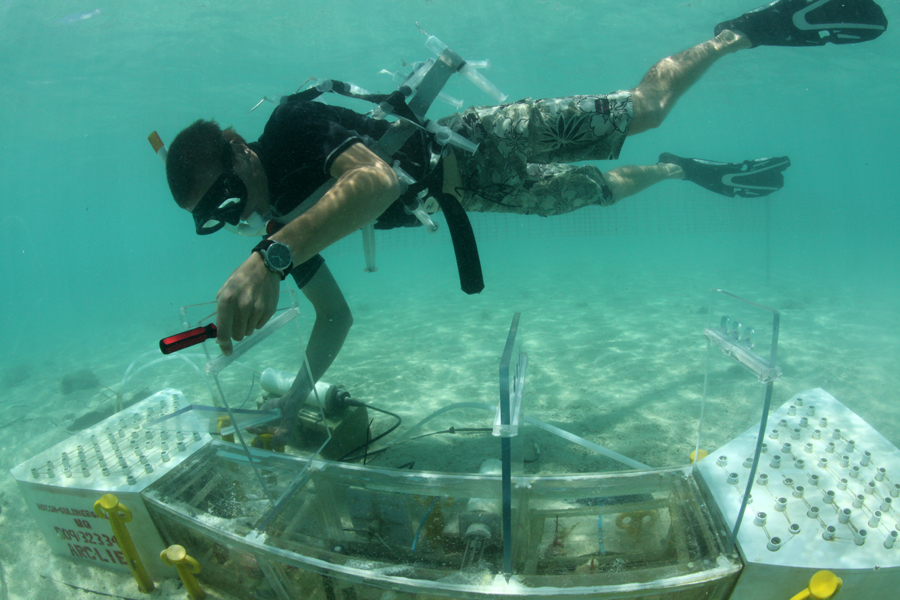 A team led by David Kline, a staff scientist at the Smithsonian Tropical Research Institute, asked what would happen if they lowered the pH on a living coral reef. By using computer-controlled pulses of carbon dioxide (CO2)-enriched seawater, they simulated a future climate-change scenario. Their results, published in Nature Ecology and Evolution, emphasize the importance of protecting live corals.

The ocean absorbs about half of the carbon produced by burning fossil fuels, making seawater more acidic. And according to a UN report, ocean acidity may double by 2100. But most of what is known about the effects of ocean acidification on corals comes from aquarium experiments.

“We wanted to get away from experiments in glass boxes and do them on the reef under natural conditions,” Kline said. “But we never imagined the differences would be so dramatic.”

“During the eight-month experimental period we went through about five tanks of CO2 gas—the kind that soft-drink companies use to put the fizz in cans of soda—to make seawater more acidic,” Kline said. “Our underwater time machine (also called a Free Ocean Carbon Enrichment or FOCE system) used an array of sensors and dosing pumps to simulate future high CO2 conditions by controlled pumping of high CO2 seawater over both living and dead Porites cylindrica colonies in our open experimental flumes on the reef flat at the University of Queensland’s Heron Island field station on the Great Barrier Reef.”

pH and temperature normally fluctuate over a 24-hour period. So the team created a system to increase CO2 by a constant amount above the background level. They cleaned the flumes, took water samples and constantly calibrated the networks of 40 sensors to ensure they were adding the levels of CO2 predicted for the future.

“Using a FOCE system is not the only way to get at the effects of ocean acidification, it’s part of a tool kit, but it gives us realistic predictions,” Kline said. “The plus is that it generates consistent information from a real reef—in natural light, food, nutrients and environmental conditions where the corals are exposed to the natural ecosystem of reef dwellers. The minus is that it is expensive and challenging to set up and run.”

The results of this first FOCE experiment on a shallow coral reef were grim: both living and dead corals were seriously affected by ocean acidification. The growth rates of living corals declined to almost zero while the rate of dissolution of dead colonies almost doubled. These results suggest that at the CO2 levels predicted for the future, coral reefs will begin to dissolve earlier than previously thought. However, one of their conclusions brightens the future outlook for reefs:

Coral skeletons covered with living tissue were much more resilient than dead corals in this real-world experiment because they were protected from boring worms and other animals that feed on corals from within the coral skeletons, and also from sea urchins, parrotfish and other bioeroders living on the outer surface of the corals that ate the dead corals at a rapid rate.

“The huge difference between the fate of living and dead corals in a natural environment gives me hope,” Kline said. “As we create marine reserves and learn how to increase the amount of living coral by restoring reefs, we’re setting up a positive feedback loop because living coral will grow the reef and slow dissolution.”

“It was amazing to work together on Heron Island,” he said. “It’s a very well studied site: people have been doing research there for 100 years. Many of the landmark studies of coral reefs were done there.” Now Kline’s time machine is on its way to the other side of the world, where he will see if the same conclusions hold up at the Smithsonian’s Caribbean Bocas del Toro Research Station in Panama.

The Smithsonian Tropical Research Institute, headquartered in Panama City, Panama, is a unit of the Smithsonian Institution. The institute furthers the understanding of tropical biodiversity and its importance to human welfare, trains students to conduct research in the tropics and promotes conservation by increasing public awareness of the beauty and importance of tropical ecosystems.Promo video.