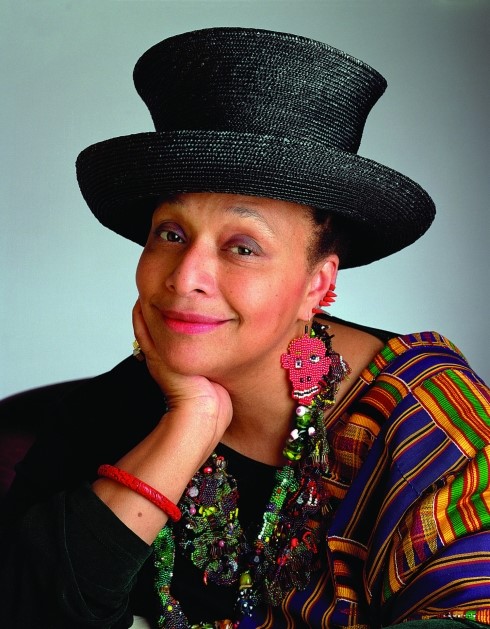 Joyce J. Scott has been named the 2019 Smithsonian Visionary Artist in recognition of her outstanding work in jewelry. Her selection was announced today by the Smithsonian Women’s Committee (SWC).

The Smithsonian Visionary Award is given to American artists deemed by experts in the field to have achieved the pinnacle of sculptural arts and design. Awardees must have works in major museums and demonstrate distinction, creativity, exceptional artistry and vision in their respective media. Previous winners include Albert Paley, Wendell Castle, Toots Zinsky, Dale Chilhuly and Faith Ringgold.

The 2019 award will be presented to Scott by Smithsonian Secretary David Skorton Wednesday, April 24, at the 37th annual Smithsonian Craft Show Preview Night Benefit. The Craft Show is produced annually by the SWC to support Smithsonian museums, research centers and the National Zoo. It will take place April 24–April 28 at the National Building Museum in Washington, D.C.

Scott uses off-loom hand-threaded beads and blown glass to create beautiful and arresting jewelry as well as figurative sculptures and wall hangings. Her art, described in the New York Times as “angry, raucous and shamelessly gorgeous, often provoking unruly laughter,” addresses difficult and challenging issues such as violence, racism and sex-trafficking. “It is intended to induce people to stop raping, torturing and shooting each other,” Scott said.

On Thursday evening, April 25, from 6 to 7 p.m., a special ticketed event “CONVO with the Visionary” will feature a lively and engaging conversation between Scott and Stephanie Stebich, the Margaret and Terry Stent Director of the Smithsonian American Art Museum. A curated selection of Scott’s work will be on exhibit during this year’s Smithsonian Craft Show.

Born, raised and still living in Baltimore, Scott was named a MacArthur Fellow in 2016. Her work appears in the permanent collections of major museums across the country, including the Smithsonian American Art Museum. For additional information about the 2019 Smithsonian Craft Show and the Smithsonian Visionary Award, go to www.smithsoniancraftshow.org or call Program Coordinator Heidi Austreng at 202-633-5006.