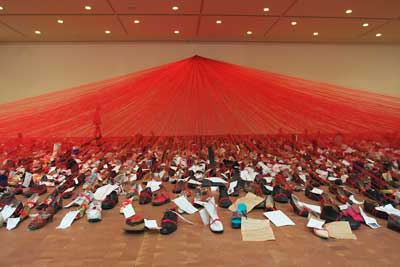 Performance and installation artist Chiharu Shiota, Japan’s representative at the 56th Venice Biennale in 2015, will recreate a monumental yet intimate work in the Arthur M. Sackler Gallery pavilion this summer as part of the museum’s “Perspectives” contemporary art series. On view Aug. 30–June 7, 2015, “Perspectives: Chiharu Shiota” will transform everyday objects—yarn, shoes and handwritten notes—into a dramatic and emotionally charged installation.

Haunted by the traces that the human body leaves behind, the work amasses personal memories through an accumulation of nearly 400 individual shoes. Collected by the artist, each shoe comes with a note from the donor describing lost individuals and past moments. In this installation, titled “Over the Continents,” almost 4 miles of red yarn will wrap around the shoes and attach to a single point in the pavilion, evoking the artist’s attention to the fundamental ties that connect humans to one another and the world.

Visitors will be able to watch as Shiota installs the work Aug. 18–21 in the museum’s pavilion prior to its official opening.

“Shiota creates deeply personal and poetic environments using the simplest of materials,” said Carol Huh, assistant curator of contemporary art at the Freer Gallery of Art and Arthur M. Sackler Gallery. “As visitors enter the Sackler, they are invited to consider the life of an object—even the most familiar one—and its power to stimulate the imagination and profound emotional reactions.”

Additional exhibition features—including video footage of the installation process, reproductions of the notes and information on gallery curator talks and film screenings—will be available online at asia.si.edu/shiota.

Currently based in Berlin, Shiota (b. 1972, Osaka, Japan) is best known for her large-scale yet intricate installations that explore the relationships between the human body, memory and loss. Trained in drawing and sculpture, Shiota’s practice developed during her studies in performance art under Marina Abramovic and Rebecca Horn. Since 1999, she has been gaining international acclaim for her site-specific installations and stage designs. Her work has been exhibited worldwide, including at the Sherman Contemporary Art Foundation (Sydney, 2013), Museum on the Seam (Jerusalem, 2013), Casa Asia (Barcelona, 2012), The National Museum of Art (Osaka, 2008), Neue Nationalgalerie (Berlin, 2006) and MoMA PS1 (New York, 2003), as well as the Biennials in Venice, Italy, and in Fukuoka and Yokohama, Japan.