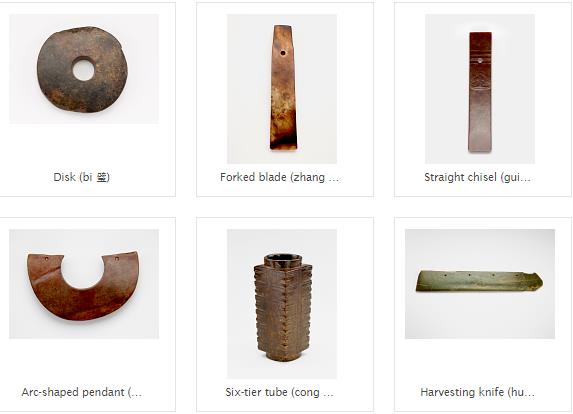 The Smithsonian’s Freer Gallery of Art and Arthur M. Sackler Gallery will launch a digital catalog, “Jades for Life and Death,” from its extensive collection of one of the finest holdings of Chinese jades in the world Oct. 6. The first release, in a series of five volumes, will include more than 250 outstanding jades produced during the Chinese Stone Age (ca. 5000–1700 B.C.) drawn from the Freer and Sackler’s collections, ranging from the Chinese Stone Age to the end of the Han dynasty (206 B.C.–220 A.D.). The online publication will be bilingual and incorporate research from the fields of art history, archaeology, geology and materials science, and take advantage of the rapidly evolving understanding of ancient China.

The jades included in the first release are searchable through customizable filter options that combine typological, historical, cultural, material and geographical details. The primary contents are jewelry and ceremonial objects such as ritual disks (bi) and tubes (cong), as well as symbolic tools that were found close to the body in tombs. The majority of the works were produced by the Neolithic Liangzhu culture (ca. 3300–2250 B.C.), which is now recognized as the most prolific and advanced center for jade production in ancient China. Despite the significance of these objects, they have never been featured in a catalog such as those created for other major jade collections in China and the West.

Chinese archaeological discoveries continue to underscore the importance of the Freer and Sackler’s works. The pace of research internationally amplifies the need for a scholarly catalog that is both interdisciplinary and digital. This digital catalog allows for immediate revision and expansion as new archeological sites and jade objects are discovered; new scholarly resources can also be added relatively easily.

“A digital platform like this facilitates easier communication with our archaeological colleagues working in China,” said Keith Wilson, the Freer and Sackler specialist who conceived this online publication. “The hope is that Chinese archaeologists will help us understand our objects, which were acquired in the early 20th century without a clear record of their original burial context.”

Given the size of the collection and the amount of scholarship and archival material that will be shared, “Jades for Life and Death” will be produced serially. Each of the anticipated five volumes is composed of five units:

The 250 detailed entries in the first volume are joined by four essays on the history of the collection, scientific studies and a survey of archaeological work on the Neolithic Liangzhu culture in China by its leading excavator. Each entry also includes links to related objects in the Freer and Sackler collection and elsewhere as well as associated documentation such as purchase records and other archival materials. This digital approach offers numerous advantages, including an almost limitless capacity for images and content that ranges from historiographic to archaeological.

The next volume in this series, scheduled for release in fall 2017, is dedicated to jades of the early Bronze Age, chiefly the Shang dynasty (ca. 1600–1050 B.C.). “Jades for Life and Death” has been generously supported by the E. Rhodes and Leona B. Carpenter Foundation. Additional funding has been provided by the Leon Levy Foundation.

The Smithsonian’s Freer Gallery of Art and the adjacent Arthur M. Sackler Gallery, located on the National Mall in Washington, D.C., together comprise the nation’s museum of Asian art. It contains one of the most important collections of Asian art in the world, featuring more than 40,000 objects ranging in time from the Neolithic to the present day, with especially fine groupings of Islamic art, Chinese jades, bronzes and paintings and the art of the ancient Near East. The galleries also contain important masterworks from Japan, ancient Egypt, South and Southeast Asia and Korea, as well as the Freer’s noted collection of works by American artist James McNeill Whistler. The Freer, which will be closed during the exhibition, is scheduled to reopen on Oct. 7, 2017 with modernized technology and infrastructure, refreshed gallery spaces and an enhanced Eugene and Agnes E. Meyer Auditorium.