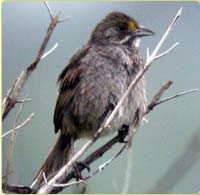 Birds use their bills largely to forage and eat, and these behaviors strongly influence the shape and size of a bird’s bill. But the bill can play an important role in regulating the bird’s body temperature by acting as a radiator for excess heat. A team of scientists have found that because of this, high summer temperatures have been a strong influence in determining bill size in some birds, particularly species of sparrows that favor salt marshes. The team’s findings were published in the scientific journal Ecography, July 20.

Scientists at the Smithsonian Migratory Bird Center at the Smithsonian’s Conservation Biology Institute and colleagues examined five species of sparrow that inhabit salt marshes on the East, West and Gulf coasts of North America. While these marshes are very similar in makeup and structure, the main difference among them is summer temperatures. Focusing on 10 species and subspecies of tidal salt marsh sparrow, the team measured 1,380 specimens and found that the variation in the sparrows’ bill size was strongly related to the variation in the daily high summer temperatures of their salt marsh breeding habitats—the higher the average summer temperature, the larger the bill. Birds pump blood into tissue inside the bill at high temperatures and the body’s heat is released into the air. Because larger bills have a greater surface area than smaller bills, they serve as more effective thermoregulatory organs under hot conditions. On average, the study found the bills of sparrows in marshes with high summer temperatures to be up to 90 percent larger than those of the same species in cooler marshes.

“It is known that blood flow is increased in poorly insulated extremities in some animals, like a seal’s flippers, a rabbit’s ears and the wattles of a turkey helping hot animals to cool down,” said Russ Greenberg, director of the Smithsonian Migratory Bird Center and lead author of the research. “The bill of a bird can function in much the same way allowing birds to dump heat. Being able to cool down and not loose excess body moisture is particularly important since these birds live in an environment with direct sun and limited access to fresh water.”