Smithsonian Exhibition To Reveal Traditional and New Knowledge of Narwhals and Their Threatened Ecosystem
May 8, 2017
News Release 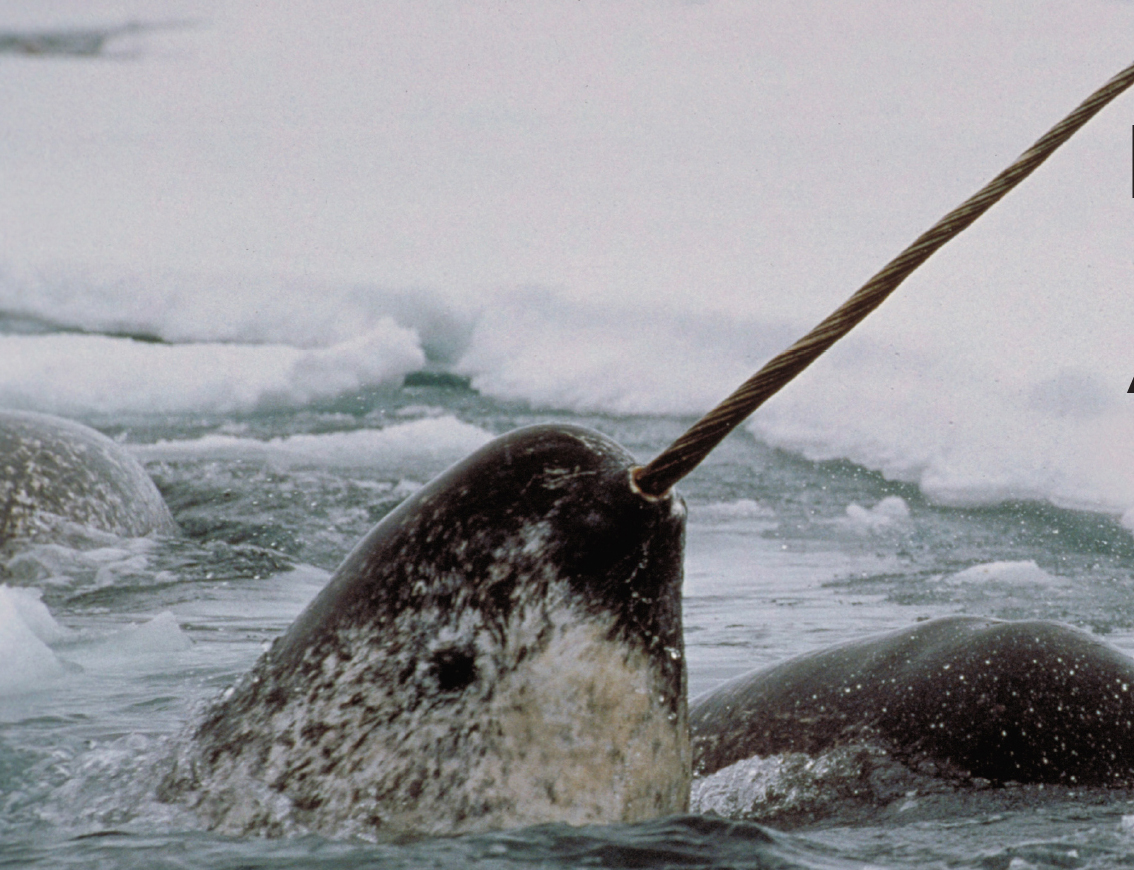 The narwhal with its unique, spiraling tusk has inspired legends in Inuit society and fascinated people across cultures for centuries. On Aug. 3, a new exhibition at the Smithsonian’s National Museum of Natural History will dive deep into the Arctic world of narwhals to explore what makes this mysterious animal and its changing ecosystem unique and important. “Narwhal: Revealing an Arctic Legend” will present Inuit perspectives on their relationship with narwhals and the latest scientific knowledge about these animals, while illuminating the interconnectedness among narwhals, people and their ecosystems.

The exhibition will display real narwhal tusks and skulls, intricate Inuit artwork and cultural artifacts, a whale-skull fossil from an extinct narwhal relative and an 18-foot, life-size model of a male narwhal suspended above the exhibition gallery. Visitors will be immersed in the Arctic environment of the narwhal via breathtaking panoramic images of landscapes, a soundscape of narwhal vocalizations, ice and water flows as well as other Arctic wildlife.

“Through new collaborations between Inuit and scientific communities, we are deepening our knowledge of the narwhal and revealing a picture of a changing Arctic that will bring museum visitors face to face with the consequences of our rapidly changing climate,” said William Fitzhugh, curator of the exhibition and director of the museum’s Arctic Studies Center.

Narwhal as a Lens for the Rapidly Changing Arctic

Narwhals and other Arctic species are remarkably adapted to their cold, harsh habitat. As the global climate warms and ice cover declines, they are changing their behaviors in ways that affect their entire food web. Inuit communities that rely on the surrounding marine ecosystems for their diet, nutrition and economy have noticed these rapid shifts. Having relied on narwhals as a part of their nutrition and culture for thousands of years, the Inuit can sustainably hunt narwhals under Canadian wildlife regulations. As Arctic ice cover has decreased, it has become harder for Inuit to maintain their traditional relationships with narwhals because the animals’ movement patterns have become less predictable. “Narwhal: Revealing an Arctic Legend” will share the stories of Inuit communities as they grapple with how these changes impact their way of life.

The exhibition will also address the consequences that exist for narwhal and marine mammal populations from increases in large-scale human activity such as new Arctic shipping traffic and economic development from oil, gas and mineral exploration. Exhibition visitors will learn about these increased human activities in the Arctic and explore how people in the Arctic have become a force that will shape the region for years to come.

Satellite-based images of sea ice have provided a reliable tool for monitoring changes in Arctic ice since 1979. Every summer, the Arctic ice cap melts down to what scientists call its “minimum” before colder weather causes the ice cover to increase. This animation displays the annual sea-ice minimum each year from 1979 through 2015. In the past 30 years, the annual Arctic sea-ice minimum has declined by at least 30 percent.

Narwhal Biology and Its Spiral Tusk

Scientific study of the narwhal has historically been challenging due to its elusive icy habitat and the difficulties of conducting field research in the harsh Arctic environment. The Inuit, however, have developed extensive knowledge of these animals over several thousand years through their deep cultural, artistic, spiritual and subsistence relationships with the narwhal. Scientists are expanding their knowledge of narwhal anatomy, physiology, behavior and the Arctic environment by collaborating with local Inuit communities and drawing on traditional knowledge to complement their research. Scientists with the National Museum of Natural History collaborated with scientists and researchers from numerous organizations, representatives from Inuit and Inughuit communities, the Nunavut Wildlife Management Fund and Fisheries and Oceans Canada to conduct interdisciplinary research about the narwhal in their rapidly changing Arctic environment.

The exhibition will explore many aspects of the narwhal’s biology and behaviors, including its social lifestyle, incredible deep-diving adaptations, the anatomy of its powerful echolocation organs, its deeper evolutionary origins and the enigmatic function of its spiral tusk. The tusk is predominantly found among male narwhals, and for this reason, many scientists believe the tusk may play a role in their ability to successfully mate with females. The exhibition presents three different hypotheses about the biological function of the tusk: as an instrument for fighting other male narwhals in battles for dominance, as a biological signal to females of a male’s fertility and finally as a sensory organ. Although evidence exists for each of these hypotheses, the function of the tusk is still a matter of active scientific debate and study. With the first genomic sample taken by a team of scientists working with the Global Genome Initiative—a Smithsonian-led international collaboration to collect, preserve, verify and provide open access to information about genomic biodiversity—new insights into the narwhal’s mysterious tusk may be closer than ever before.