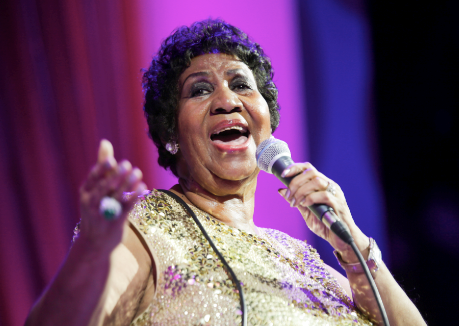 The Smithsonian’s National Portrait Gallery held its inaugural American Portrait Gala Sunday, Nov. 15, raising more than $1.74 million, which will directly benefit the museum’s exhibition programming. The event honored Major League Baseball Hall of Famer Henry “Hank” Aaron, U.S. Marine and Medal of Honor recipient Cpl. Kyle Carpenter, singer and musician Aretha Franklin, fashion designer Carolina Herrera and designer and artist Maya Lin, all of whose portraits are in the museum’s collection. The honorees were awarded the Portrait of a Nation Prize for their exemplary accomplishments in the arts, business, entertainment, military service, sports and their commitments to service.

The evening began with a cocktail hour and dinner in the museum’s Kogod Courtyard beneath the acclaimed Foster+Partners undulating glass-roof canopy, a signature element of the renovated National Historic Landmark building shared by the National Portrait Gallery and the Smithsonian American Art Museum. During dinner, guests enjoyed the presentation of the “Portrait of a Nation” Prize: actor/filmmaker Lee Daniels presented to Herrera, Gen. Joseph Dunford to Carpenter, Congressman John Lewis to Aaron, former Attorney General Eric Holder to Franklin and architect David Adjaye to Lin. The evening culminated with dessert and a musical performance by Franklin, who performed several hits, including “RESPECT,” “Freedom” and “Chain of Fools.”

The American Portrait Gala’s founding chairs are Wayne and Catherine Reynolds. Co-chairs are the museum’s chairman, Steve Hamp, and his wife Sheila Hamp; Robert and Arlene Kogod; David and Alice Rubenstein; and the Ambassador of France to the United States Gérard Araud.

“I am very grateful for the support of the gala chairs and honored that so many people supported our inaugural effort to raise funds for exhibitions,” said Kim Sajet, director of the museum. “Tonight we honored five people for their exemplary values of bravery, tenacity, creativity, ingenuity and soul. These are the types of attributes we want to pass on to future generations. And indeed, that is precisely what the Smithsonian’s National Portrait Gallery aims to do through our exhibitions and programs.”

“This occasion celebrates the legacy of the National Portrait Gallery and America’s heritage of individual achievement and accomplishment,” said Catherine Reynolds founding chair of the American Portrait Gala.