Imagine the Future With the Smithsonian and 2018’s Biggest Thinkers 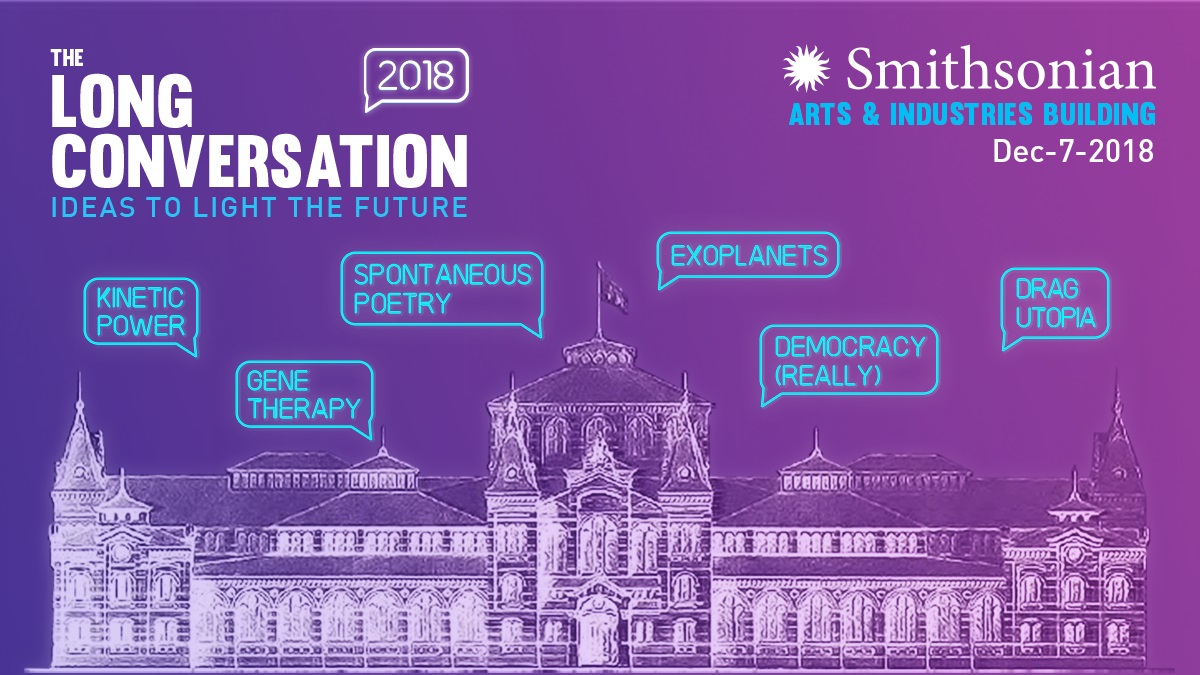 The Long Conversation, the Arts & Industries Building’s signature event for imagining the future, returns to the National Mall Friday, Dec. 7, 2–10 p.m. This radically different Smithsonian experience brings together artists, scientists and the year’s biggest luminaries for a rollicking creative marathon of conversations around one big question: What makes you hopeful about the future?

“In a world where it’s so easy to focus on what’s going wrong, we think it’s a radical and important idea to focus on what could go right,” said Rachel Goslins, director of the Arts & Industries Building. “There are no moderators, no Powerpoint presentations, just authentic and spontaneous dialogue between the most interesting people we know with big ideas for the future. We started the Long Conversation last year, and in many ways it is a microcosm of both the history of the building, which has showcased innovative ideas since opening in 1881, and of its future as a space for creativity, experimentation and forward-thinking.”

The Long Conversation’s unique format is a relay of short, intimate, two-person dialogues unified by a common question. Conversationalists each bring one game-changing idea from their field that makes them hopeful for the future—a trend, an invention, a technological breakthrough, a movement. Every 15 minutes, one person rotates offstage and another comes on, creating a series of electrifying moments as tech CEOs meet recording artists, and poets meet clean-food farmers.

Art installations throughout the space will blend creativity and science, including 3-D brain waves by sculptor and neuroscientist Julia Buntaine Hoel, an immersive post-human environment by Baltimore-based Phaan Howng, a 15-foot kinetic light sculpture by Maryland duo McCormack and Figg and a photoreflective “selfie booth for the future” from Gabriel Mellan.

The Long Conversation is the culmination of Smithsonian magazine’s annual Ingenuity Festival, a series of events celebrating innovation in American life, and will feature several winners of the Smithsonian’s 2018 Ingenuity Awards. Surprise performances from special guests will punctuate the night, previewing Smithsonian’s first-ever Year of Music kicking off in 2019.

Free tickets will be released online Monday, Nov. 5, with entry times staggered by two-hour sessions. All conversations will be live-streamed online on Facebook.

More information can be found at si.edu/longconvo.

About the Arts & Industries Building

The Smithsonian’s Arts & Industries Building opened in 1881 as America’s first National Museum. Called the “Palace of Invention” or the “Mother of Museums,” it is the Smithsonian’s second-oldest building on the National Mall. Designed as a grand experiment, AIB showcased the latest ideas that were about to change the world—Thomas Edison’s lightbulb, Alexander Graham Bell’s telephone, Apollo rockets—and incubated almost every other Smithsonian collection. Lying dormant since 2004, AIB is now being reenergized as the Smithsonian’s home for future thinking and will pilot experimental programs and exhibitions for its eventual reopening.