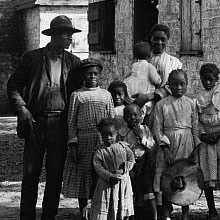 On the 150th anniversary of “Juneteenth” (June 19), the oldest known celebration commemorating the end of slavery in the United States, the Smithsonian’s National Museum of African American History and Culture (NMAAHC) and FamilySearch announced the digital release of 4 million Freedmen’s Bureau historical records. In addition, a nationwide effort seeking volunteers to transcribe the handwritten entries has begun.

A collaboration with FamilySearch, the largest genealogy organization in the world, the Afro-American Historical and Genealogical Society and the California African American Museum, the Freedmen’s Bureau Project makes the records of freed slaves available and accessible by taking the raw records, extracting the information and indexing them to make them searchable online. Once indexed, it will be possible to find an ancestor by going to the site, entering a name and discovering a family member.

The Freedmen’s Bureau was organized near the end of the American Civil War to assist newly freed slaves in 15 states and the District of Columbia. From 1865 to 1872, the Bureau opened schools, managed hospitals, rationed food and clothing and even solemnized marriages. In the process, it gathered priceless handwritten personal information, including marriage and family information, military service, banking, school, hospital and property records on potentially 4 million African Americans. The records are the property of the National Archives and Records Administration, where they have been carefully preserved and protected for decades.

“These records are a treasure trove of information, but previously, one had to travel to the National Archives to access the records in their original form,” said Hollis Gentry, genealogy specialist at NMAAHC. “Our museum is so excited to participate in this project because it allows us to share these valuable records with a much wider audience.”

Throughout the year, volunteers with the collaborating organizations and interested individuals from the general public will search and index these priceless records, making the information, details and histories readily discoverable for free, online genealogical searches.

The goal is to have the records fully indexed in time for the opening of the National Museum of African American History and Culture in fall 2016. It only takes a little training for anyone with a computer and Internet access to join the project. Technical assistance will be available at FamilySearch centers nationwide.

For more information about the effort or to volunteer, visit GetInvolved/FreedmensBureau and www.DiscoverFreedmen.org. Join the conversation on social media with #DiscoverFreedmen.

The National Museum of African American History and Culture was established by an Act of Congress through legislation signed into law in 2003 by President George W. Bush. Scheduled to open in fall 2016, the museum is under construction on the National Mall in Washington, D.C., on a five-acre tract adjacent to the Washington Monument. Upon completion, NMAAHC will become the nation’s largest and most comprehensive cultural institution devoted exclusively to exploring and documenting the African American story and its impact on American history. For more information, visit the museum’s website at nmaahc.si.edu.

FamilySearch is the largest genealogical organization in the world providing billions of ancestral records. FamilySearch is a nonprofit organization sponsored by the Church of Jesus Christ of Latter-day Saints. FamilySearch’s commitment to helping people connect with their ancestors is rooted in the belief that families are meant to be central to people’s lives. Learn more at www.FamilySearch.org.

Images are available at www.discoverfreedmen.org/media.