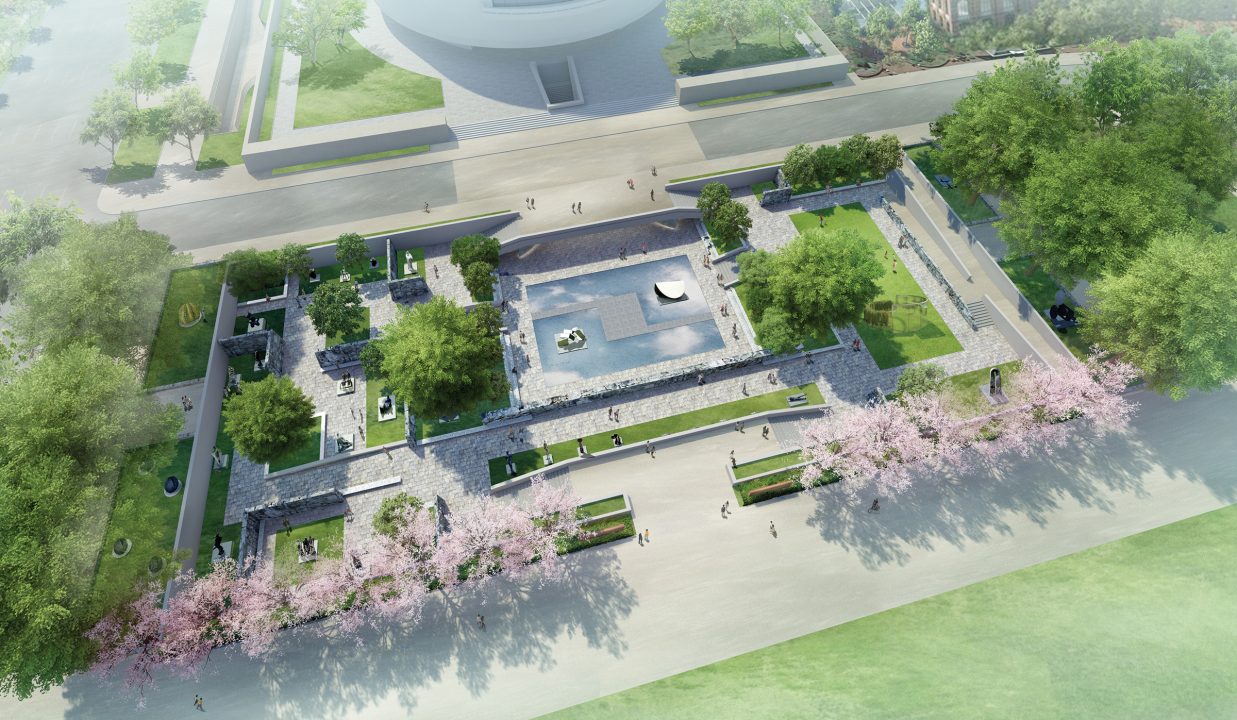 The Smithsonian’s Hirshhorn Museum and Sculpture Garden today passed an important milestone in plans to revitalize its Sculpture Garden, receiving approval from the National Capital Planning Commission (NCPC) for its concept design. This news follows last month’s unanimous support of the Hirshhorn’s plans from the Commission of Fine Arts (CFA).

Working with a design team led by architect and artist Hiroshi Sugimoto, the museum has conceived a dynamic new space for visitors to experience a greater range of art and programming that opens a second “front door” to the museum from the National Mall, directly engaging the more than 35 million people who pass through the Mall each year.

Following the June 6 NCPC public meeting, the museum will address comments and prepare to move the project into the design development phase. The next public meeting will be held in September to seek additional feedback.

“The plans we have developed with artist and architect Hiroshi Sugimoto are the result of a thoughtful process over the last two years, involving input from dozens of important stakeholders,” said Melissa Chiu, Hirshhorn director. “Sugimoto has studied the Sculpture Garden’s history and has carefully considered every aspect of how visitors will experience the revitalized garden. We look forward to moving to the next phases of planning, as we continue to receive public feedback.”

The Sugimoto concept will revitalize the Sculpture Garden for the 21st century while embracing the Hirshhorn’s architectural heritage, drawing upon architect Gordon Bunshaft’s original designs, as well as a later intervention guided by landscape architect Lester Collins. The design incorporates Bunshaft’s perimeter concrete walls, reopens an original underground passageway to the main museum plaza and realizes Bunshaft’s longstanding vision for a larger reflecting pool, while reinvigorating Collins’ goals for the space—improving the visitor experience through additional ramps for accessibility and increased plantings for shade.

Sugimoto’s vision will provide a greater array of spaces to accommodate 50% more of the museum’s outstanding collection of 19th- and 20th-century modern masterpieces. At the same time, Sugimoto has created a design for cutting-edge artwork of today and the future, with flexible spaces for sculpture and performance.

“The approvals from NCPC and CFA reflect broad support for the new concept and bring us one step closer to realizing our vision,” said Daniel Sallick, Hirshhorn board chair. “The reimagined Hirshhorn Sculpture Garden will provide visitors from Washington and around the world greater access to the garden from the National Mall and a truly 21st-century art experience.”

Hiroshi Sugimoto has completed a number of architectural projects, including most recently the Enoura Observatory of the Odawara Art Foundation just outside of Tokyo. The design team is composed of the Tokyo-based architecture firm founded in 2008 by Hiroshi Sugimoto together with Tomoyuki Sakakida, New Material Research Laboratory (NMRL), in association with Yun Architecture in Brooklyn, New York; Quinn Evans Architects in Washington, D.C., as architect of record; and Rhodeside & Harwell Inc. in Alexandria, Virginia, as landscape architect.

History of the Sculpture Garden

Designed by architect Gordon Bunshaft, the Hirshhorn Museum and Sculpture Garden opened in 1974. Bunshaft’s original design for the Sculpture Garden, which was never realized, was much larger and featured a substantial reflecting pool that ran its entire length, traversing the National Mall. The subsequent modified concept that was built was heavily influenced by traditional Japanese gardens and was consistent with Bunshaft’s overall design for the museum and the Modernist aesthetic of the time, creating a neutral setting for art, but with limited plantings and little shade.

In 1981, the museum engaged landscape architect Lester Collins to consult on several modifications with the goals of increasing accessibility and adding plantings for shade. These and other modifications in the 30 years since have resulted in a Sculpture Garden that has continued to evolve.

Now, with pressing infrastructure issues, including a need to address flood control and the deterioration of the perimeter walls, the necessity for renovation has created an opportunity to both embrace earlier visions and reimagine the space to meet the current needs of visitors, the growth of the museum’s collections over the past 50 years and the many different ways in which artists are working today. The museum began working to identify and study infrastructure deficiencies in the Sculpture Garden more than two years ago, completing an intensive study of the structural integrity of the walls and assessment of the storm-water management system in 2017. When Sugimoto’s renovation of the Hirshhorn lobby was nearing completion, museum leadership began conversations with him in 2017 about a new concept for the Sculpture Garden, seeking to create a cohesive visitor experience spanning its interior and exterior spaces.

The Hirshhorn Museum and Sculpture Garden is the national museum of modern and contemporary art and a leading voice for 21st-century art and culture. Part of the Smithsonian, the Hirshhorn is located prominently on the National Mall in Washington, D.C. The collection includes major holdings of painting, sculpture, photography, mixed-media installations, works on paper and new media, making it one of the most important collections of postwar American and European art in the world. The Hirshhorn presents diverse exhibitions and offers an array of public programs on the art of our time—free to all, 364 days a year. For more information, visit hirshhorn.si.edu.