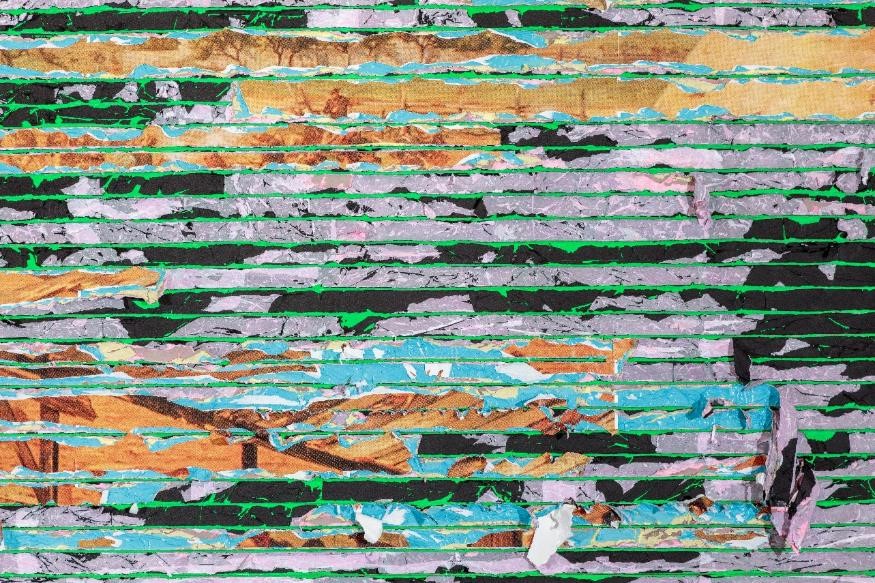 “Pickett’s Charge” will be Bradford’s first major American solo show after his presentation as the U.S. representative for the 57th International Exhibition of La Biennale di Venezia, which opens in early May.

Bradford has achieved wide acclaim for a technically inventive and uniquely powerful abstraction that is steeped in a personal exploration of history and the sociopolitical issues shaping the world. Embedded in his paintings are references ranging from America’s struggles with its own Constitution and Bill of Rights to the traumas of the AIDS epidemic in the early 1980s, and from the brutality of black slavery to its refracted echoes in the race riots of Los Angeles during the early 1990s. For his Hirshhorn commission, Bradford takes as his point of departure Paul Philippoteaux’s landmark 1883 cyclorama “Pickett’s Charge,” a dramatic opus depicting the final charge of the Battle of Gettsyburg—an event historians cite as the critical turning point in the Civil War and, consequently, in American history. Philippoteaux’s famous work, which resides at the Gettysburg National Military Park, Pa., captures the infamous Confederate Army infantry assault from which the Southern military never recovered.

For the Hirshhorn cycle, Bradford has woven Philippoteaux’s figurative imagery into a majestic, abstracted visual experience through his hallmark technique of collage. Elements from the original 1883 painting are among multiple layers of collaged paper that the artist has scraped through to reveal hidden textures and complexities beneath. The resulting interplay of past and present, the legible and the evocative, invites viewers to reconsider conventional linear narratives and the possibility of contradictions in accepted histories. Bradford’s open questions are particularly timely in contemporary America, and along the Mall of the nation’s capital.

“For his Washington, D.C., debut, Mark Bradford has created a work that draws from America’s tumultuous history with the fearlessness he has shown throughout his career,” said Hirshhorn Director Melissa Chiu. “We are proud to exhibit this significant new cycle of paintings, and look forward to the discussions it will inspire in our local D.C. community and across the nation.”

“I became interested in “Pickett’s Charge” as I was thinking further about the ideas I am working with at the U.S. Pavilion for this year’s Venice Biennale, and about what it means to create a commission for the Hirshhorn at this particular time,” Bradford said. “Politically and socially, we are at the edge of another precipice. And those of us who are artists must charge into the fray, leading a charge to turn a tide.”

To complement Bradford’s commitment to social and civic engagement, the Hirshhorn will offer a comprehensive schedule of public programs throughout the yearlong run of the exhibition, including initiatives with local Howard University students.

Mark Bradford (b. 1961) lives and works in Los Angeles and creates works informed by personal experience that expand the language of abstraction by imbuing it with historical significance. Working with colored paper that he collages and transforms through cutting, tearing and abrading, Bradford reconciles the formal qualities of Abstract Expressionism with the need to have his art address issues of cultural importance. His works often address issues of race and gender as much as art history. Bradford recently co-founded Art + Practice, a Los Angeles nonprofit with a mandate for practical work training and arts education for disadvantaged teens.

Bradford has had solo exhibitions at major venues, including the Hammer Museum in Los Angeles; the Wexner Center for the Arts in Columbus, Ohio; the Whitney Museum of American Art in New York; the Albright-Knox Museum in Buffalo, N.Y.; and the Studio Museum in Harlem, N.Y. He has participated in several international group exhibitions, such as the Ninth Gwangju Biennale, the 12th International Istanbul Biennial, the 55th Carnegie International and the 2006 Whitney Biennial.

His work is in numerous public and private collections, including the Hirshhorn; the Solomon R. Guggenheim Museum in New York; the Broad Art Foundation in Santa Monica, Calif.; the San Francisco Museum of Modern Art; and the Los Angeles County Museum of Art, among others. Bradford attended the California Institute of the Arts, where he received a bachelor’s degree in 1995 and a master’s degree in 1997. He has received numerous awards and honors, including the U.S. State Department’s Medal of Arts in 2015, the MacArthur Foundation’s “genius” grant in 2009 and the Joan Mitchell Foundation Award in 2002.