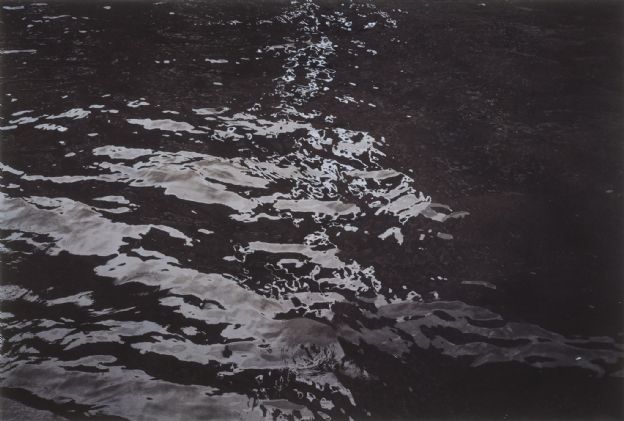 “Dark Matters: Selections from the Collection,” an exhibition that draws on the associations and implications of darkness, opens Feb. 3 at the Smithsonian’s Hirshhorn Museum and Sculpture Garden. Featuring works by Joseph Beuys, Troy Brauntuch, Miguel Calderón, Roni Horn, Sally Mann, Ron Mueck, Allan McCollum and Frank Stella, among others, the exhibition does not restrict itself to a particular movement or generation. Nor is any one medium given the spotlight; painting, sculpture, photography and video are included, and in the summer a selection of works in the exhibition will rotate. Darkness appears in many guises, from the obliteration of the image to the confrontation of the unknown, and assumes many functions, from conveying emotional weight to offering a metaphor for the workings of memory.

Many of the artworks in “Dark Matters” are literally, visibly dark, such as Beuys’ “F.I.U. Blackboards” (1977–1979) and McCollum’s “40 Plaster Surrogates” (1982–1990). In both of these pieces, imagery is effaced. Before the artist washed them clean, Beuys’ blackboards were once filled with notes and diagrams scrawled during lectures for his Free International University. McCollum’s “surrogates” are modules that mimic small pictures, their raised edges painted as frames and the area inside, where normally an image would be expected, painted black. Made of hydrocal, a material commonly used for dental molding, it is as though they are physical “impressions” of pictures.

The exhibition also marks the return to the Hirshhorn’s galleries, after an absence of more than two years, of Mueck’s larger-than-life sculpture “Untitled (Big Man)” (2000), one of the most popular pieces in the museum’s collection. Crouched in a corner, the hyperrealistic nude glowers at the viewer. He is connected to the other works not by shade or hue but by a cast of mind.

Darkness is a void—the absence of light. It evokes notions of mortality, silence, solitude and loss. Potential violence may lurk in the dark, as in Calderón’s video “The Steps of the Enemy” (2006), in which terror reaches out from pitch-blackness. Or darkness may conceal outright violence, as in Brauntuch’s large-scale conté crayon drawing “Untitled” (1989), which captures a slaughterhouse coup de grâce. Darkness may cloak mystery, as in James Welling’s shadowy black-and-white photographs of draped fabric “Untitled (No. 46)” and “Untitled (No. 47)” (both 1981), which, like Calderón’s work, are recent acquisitions never before exhibited by the museum. Darkness may also engulf people, erasing their existence. Horn’s photographs of the Thames refer to the river’s history as a location for suicides, homicides and accidents.

The landscape of Mann’s photograph “Untitled (Manassas #15 from the Battlefield series)” (2000) is similarly unpopulated, the Civil War having receded into memory. The artist employed an obsolete wet-plate process that was popular in the 19th century and distressed the image by unevenly applying the collodion coating to the plate. Bradley McCallum and Jacqueline Tarry’s “Amelia Boynton” (2008) also complicates a photograph’s legibility. Positioned just above a hand-painted rendering of a historical image of the civil rights leader is a silk scrim imprinted with toner that replicates it—only the duplication is not exact. Portions of the image reside on each layer; viewers are required to reassemble the whole, yet even then much of the image is twinned into a blur.

Darkness as a lack or limit of understanding is likewise pursued by Wayne Gonzales. Combining the pointillism of Georges Seurat with the Benday dots of Roy Lichtenstein, “Pentagon” (2004–2005) obscures an aerial view of the headquarters of the U.S. Department of Defense. Dissolving into ripples of light and shadow at close proximity, Gonzales’ painting becomes more legible as one backs away.

Even at its bleakest, as darkness absorbs light, it absorbs one’s gaze, engendering feelings of timelessness and infinity. Whether literal or metaphorical, evident or implied, darkness suggests a range of meanings. But seeing in the dark always involves questioning what one sees. “Dark Matters” is organized by assistant curators Melissa Ho and Mika Yoshitake.

The Hirshhorn Museum and Sculpture Garden, the Smithsonian Institution’s museum of international modern and contemporary art, has nearly 12,000 paintings, sculptures, photographs, mixed-media installations, works on paper and new media works in its collection. The Hirshhorn presents diverse exhibitions and offers an array of public programs that explore modern and contemporary art. Located at Independence Avenue and Seventh Street S.W., the museum is open daily from 10 a.m. to 5:30 p.m. (except Dec. 25). Admission to the galleries and special programs is free. For more information about exhibitions and events, please visit hirshhorn.si.edu. Follow the Hirshhorn on Facebook at facebook.com/hirshhorn and on Twitter at twitter.com/hirshhorn. To request accessibility services, please contact Kristy Maruca at marucak@si.edu or (202) 633-2796, preferably two weeks in advance.