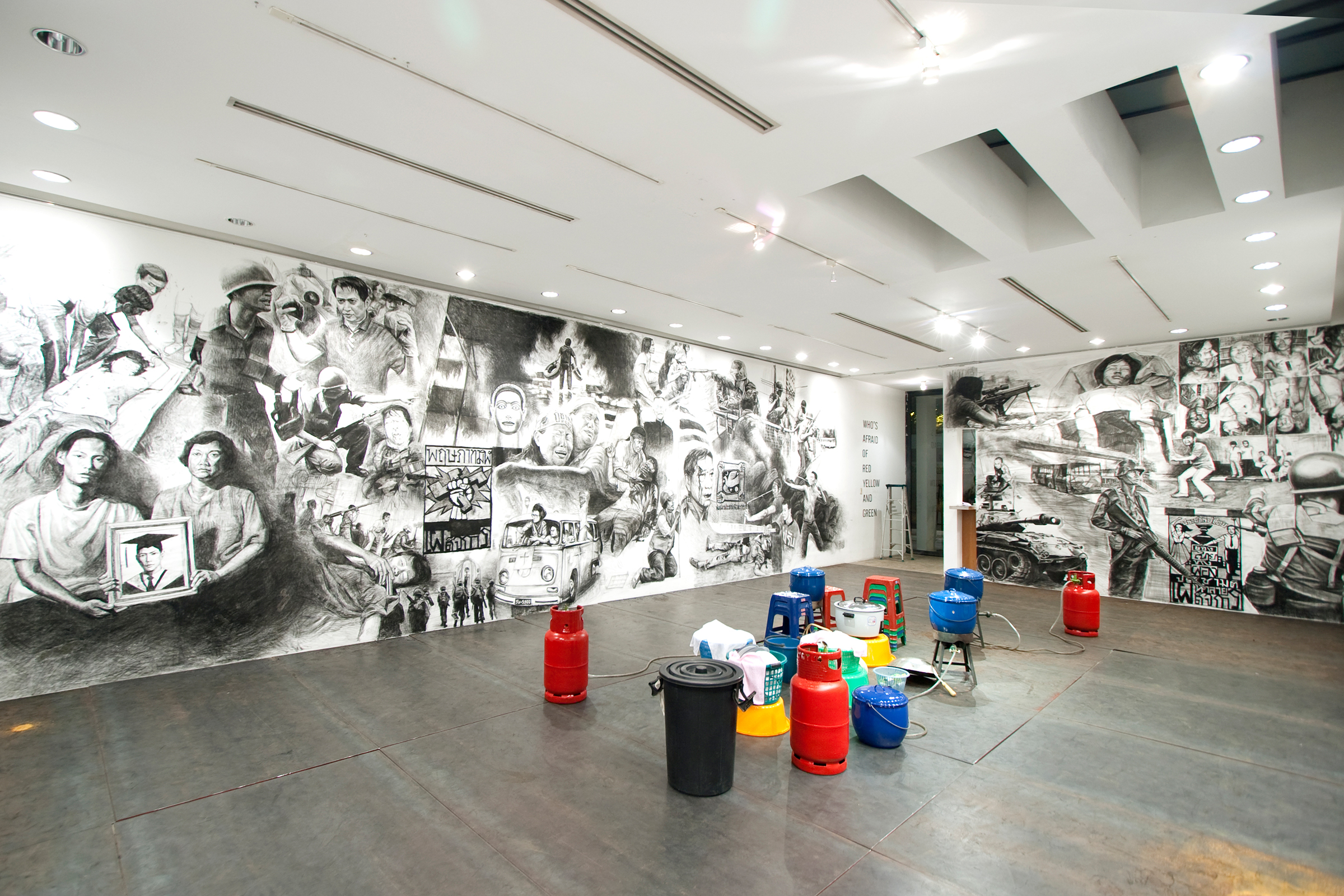 The Smithsonian’s Hirshhorn Museum and Sculpture Garden will present the museum’s first-ever exhibition of works by contemporary Thai artist Rirkrit Tiravanija. Organized by Mark Beasley, the museum’s Robert and Arlene Kogod Secretarial Scholar, Curator of Media and Performance Art, the exhibition, titled “Rirkrit Tiravanija: Who’s Afraid of Red, Yellow, and Green,” will transform the Hirshhorn’s galleries into a communal dining space in which visitors will be served curry and invited to share a meal together. The installation includes a large-scale mural, drawn on the walls over the course of the exhibition, which references protests against Thai government policies. The exhibition will also include a series of documentary shorts curated exclusively for the Hirshhorn by Thailand’s leading independent filmmaker and Palme d’Or prize-winner Apichatpong Weerasethakul in collaboration with the artist. On view May 17–July 24, Tiravanija’s presentation unites his signature communal food-based work with his ongoing series of drawings derived from protest imagery, creating a unique dialogue within a single installation.

“We are excited to introduce Tiravanija’s interactive culinary experience to the Washington, D.C., community,” said Hirshhorn Director Melissa Chiu. “Tiravanija’s thoughtful practice offers new perspectives on the ways in which art and creativity are used to interpret political and social issues of our time.”

Tiravanija’s long and varied career defies classification. For nearly 30 years, his artistic production has focused on real-time experience and exchange, breaking down the barriers between object and spectator. The title of Tiravanija’s culinary installation, which will be presented at the Hirshhorn for the first time since it entered the museum’s collection in 2017, “(who’s afraid of red, yellow, and green),” refers to the colors worn by the various factions in recent Thai government protests. The title also refers to the 1982 vandalism of Barnett Newman’s similarly titled painting in Berlin, which was motivated by the attacker’s belief that Newman’s painting was a “perversion” of the German flag. To soften Newman’s provocative title, Tiravanija uses parentheses and lowercase letters, suggesting that viewers answer the question as framed: “Who is afraid of what these colors symbolize?”

Tiravanija’s unorthodox work first came to public view in a 1989 New York group show that included “Untitled Empty Parenthesis,” which consisted of the remains of a green curry meal. He continued to challenge the possibilities of the gallery space, eventually co-opting it as a site for the preparation and consumption of communal meals for gallery-goers, as in “Untitled (Free)” (1992), and even going so far as to invite people to live within the gallery in “Untitled” (1999), which was an exact replica of his East Village apartment. Tiravanija’s interest lies in a desire to subvert deeply ingrained ways of interacting with art. By seeking alternative experiences of time, Tiravanija opens the door for novel forms of collaboration and exchange by diminishing the preciousness of objects through a reconsideration of their lifecycle and function.

Born in Buenos Aries, Argentina, Tiravanija received his Bachelor of Arts from the Ontario College of Art and Design in 1984 and his Master of Fine Arts from the School of the Art Institute of Chicago in 1986. From 1985 to 1986, he participated in the Whitney Independent Study Program. He has received numerous grants and awards, including the Absolut Art Award (2010), the Hugo Boss Prize (2004), the Lucelia Artist Award (2003) and the Gordon Matta Clark Foundation Award (1993), among others. He has had individual exhibitions at the following institutions: Modern Art Museum of Fort Worth, Texas (2014); Yerba Buena Center for the Arts, San Francisco (2013); Tate Modern, London (2013); Singapore Art Museum, Singapore (2012); Centre Pompidou, Paris (2012); MoMA (Museum of Modern Art), New York (2012); Bonnierskonsthall, Stockholm (2011); Mildred Lane Kemper Art Museum, St. Louis (2009); and Drawing Center, New York.