Hirshhorn Announces Five-City Tour Across US and Canada for “Yayoi Kusama: Infinity Mirrors” 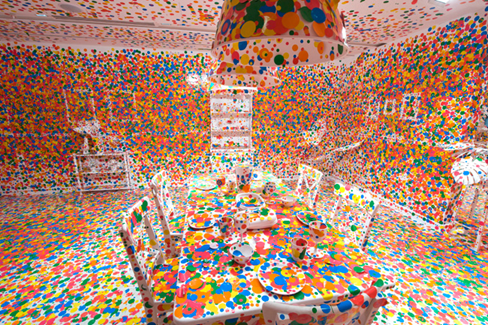 “Yayoi Kusama: Infinity Mirrors,” the first institutional survey exhibition to explore the evolution of the celebrated Japanese artist’s immersive infinity rooms, will embark on the most significant North American tour of Kusama’s work in nearly two decades. Following its debut at the Smithsonian’s Hirshhorn Museum and Sculpture Garden Feb. 23, 2017, which is the organizing institution, “Yayoi Kusama: Infinity Mirrors” will travel to four major museums in the United States and Canada, including the Seattle Art Museum (June 30–Sept. 10, 2017), The Broad in Los Angeles (October 2017–January 2018), the Art Gallery of Ontario (March–May 2018) and the Cleveland Museum of Art (July–October 2018).

“Yayoi Kusama: Infinity Mirrors” provides visitors with the unique opportunity to experience six of Kusama’s most iconic kaleidoscopic environments at once, alongside large-scale, whimsical installations and key paintings, sculptures and works on paper from the early 1950s to the present. It also marks the North American debut of numerous new works by the 87-year-old artist, who is still actively creating in her Tokyo studio. These include large-scale, vibrantly colored paintings and the recently realized Infinity Room, “All the Eternal Love I have for Pumpkins” (2016), featuring dozens of her signature bright yellow, dotted pumpkins.

“Yayoi Kusama, who, at this stage of her career, is a worldwide phenomenon, has the ability to inspire audiences of all ages with the power of her art,” said Melissa Chiu, the Hirshhorn’s director. “It is a privilege and an honor to collaborate with our four partnering institutions to offer audiences across North America the opportunity to experience more than five decades of her artistic output.”

The exhibition will also include “Infinity Mirror Room—Love Forever” (1966/1995), a hexagonal chamber into which viewers will be able to peer from the outside, seeing colored flashing lights that reflect endlessly from ceiling to floor. The work is a re-creation of Kusama’s legendary 1966 mirror room “Kusama’s Peep Show” (no longer extant), which the artist used to stage group performances in her studio in the late 1960s.

Kusama’s signature bold polka dots will be featured in “Dots Obsession—Love Transformed into Dots” (2009), a domed mirror room surrounded by inflatables suspended from the ceiling. More recent spectacular LED environments, filled with lanterns or crystalline balls that seem to extend into infinite space, will be represented by “Aftermath of Obliteration of Eternity” (2009) and “Souls of Millions of Light Years Away” (2013).

“As Yayoi Kusama’s work is realized in different spaces, each venue will offer a unique sensory journey through Kusama’s world,” said Hirshhorn Associate Curator Mika Yoshitake, who organized the exhibition. “When visitors explore the exhibition, they will inevitably become part of the works themselves, challenging their preconceived notions of autonomy, time and space.”

A selection of more than 60 paintings, sculptures and works on paper will also be on view, showcasing many of Kusama’s lesser-known collages made after her return to Japan in 1973. These works trace the artist’s trajectory from her early surrealist works on paper, “Infinity Net” paintings and “Accumulation” assemblages to recent paintings and soft sculptures, highlighting recurring themes of nature and fantasy, utopia and dystopia, unity and isolation, obsession and detachment, and life and death.

The exhibition will conclude with Kusama’s iconic participatory installation “The Obliteration Room” (2002), an all-white replica of a traditional domestic setting. Upon entering, visitors will be invited to cover every surface of the furnished gallery with multicolored polka-dot stickers, gradually engulfing the entire space in pulsating color.

“Yayoi Kusama: Infinity Mirrors” will be accompanied by an exhibition catalog that takes an unprecedented interdisciplinary approach to Kusama’s work and includes a catalogue raisonne of Kusama’s “Infinity Rooms,” along with an illustrated chronology and artist biography with never-before-published archival material. The contributing authors will introduce new research that sheds light on this pioneering contemporary artist, including essays by Yoshitake, Gloria Sutton and Alexander Dumbadze and an interview with Kusama conducted by Chiu.

For more information on #InfiniteKusama and the Hirshhorn’s presentation of “Yayoi Kusama: Infinity Mirrors,” visit hirshhorn.si.edu/infinitekusama.

Kusama was born in Matsumoto, Nagano, Japan, in 1929 and works at her studio in Tokyo. She studied traditional Nihonga (Japanese-style) painting in Kyoto and moved to New York City in 1958. There, she was active in avant-garde circles during the formative years of pop art and minimalism, exhibiting her work alongside such artists as Andy Warhol, Claes Oldenburg and Allan Kaprow—figures who have cited Kusama as influential to the development of assemblage, environmental art and performative practices.

Kusama exhibited widely in Italy, Germany and the Netherlands in the mid-’60s, participating in exhibitions with artists associated with Nul, Zero and the New Tendency in Europe, where she began developing her interest in the optics and interactive elements of mirrors, electric lights, sound and kinetics.

Kusama’s fame grew in the late ’60s through her radical antiwar happenings, which espoused nudity and polka dots in the streets of New York. Because of ongoing struggles with her health, Kusama returned to Japan in 1973 where she has since resided. In recent years, Kusama has achieved celebrity status as well as tremendous critical respect.