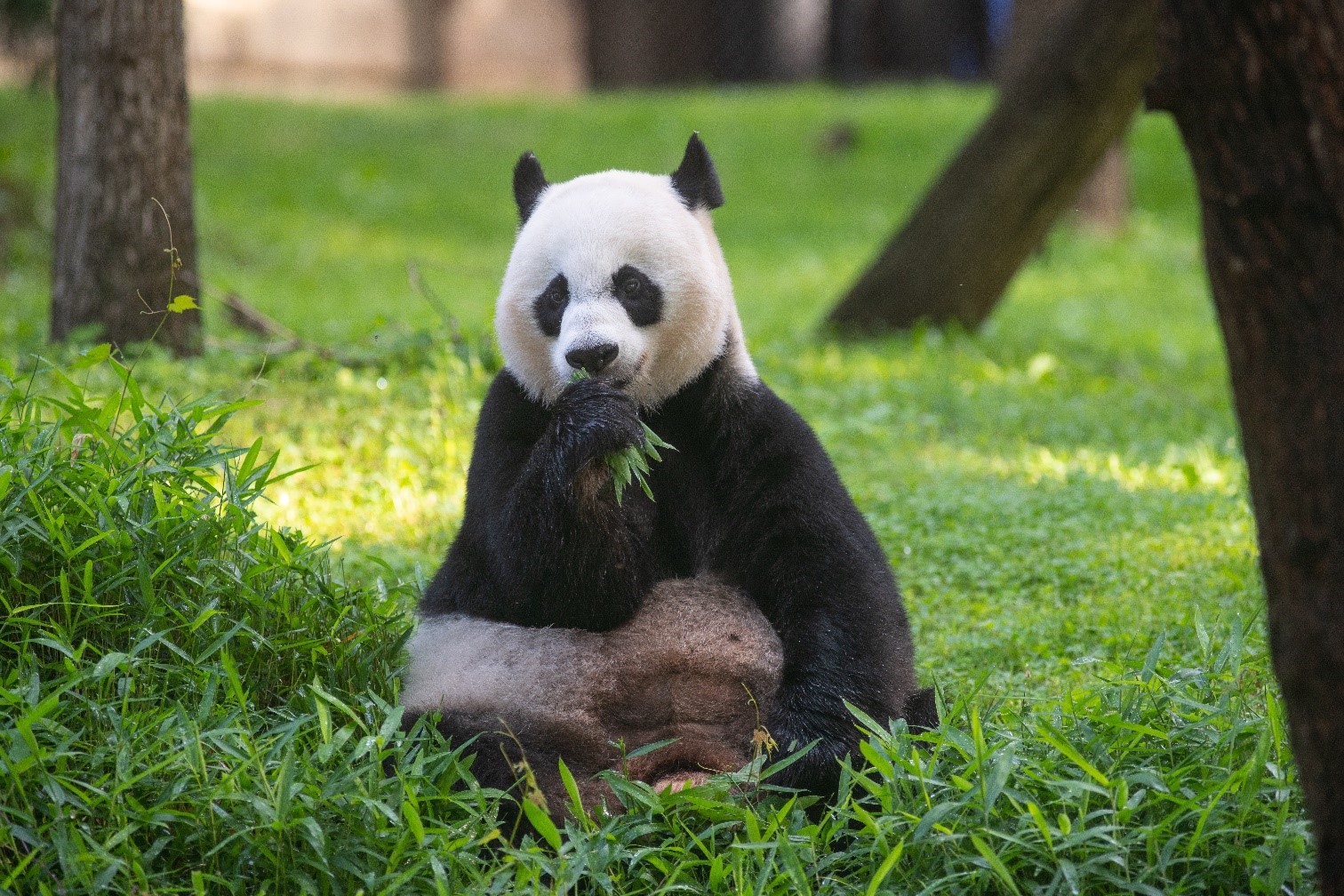 Scientists and keepers had been closely monitoring Mei Xiang’s behavior and hormones since she began displaying behavioral changes March 15, indicating she was entering her breeding season. Daily hormone reports showed Mei Xiang’s estrogen levels peaked the evening of March 27, which means she was ovulating and able to become pregnant. Female giant pandas are only in estrus, or able to become pregnant, for 24 to 72 hours each year.

Since the window when a giant panda can conceive a cub is so short, the Zoo’s panda team performed an artificial insemination on Mei Xiang. They artificially inseminated her using fresh semen from Tian Tian (t-YEN t-YEN) for the procedure.

“Every giant panda breeding season is slightly different, but Mei Xiang and Tian Tian have been displaying very clear and strong behaviors this year,” said Steven Monfort, John and Adrienne Mars director of the Smithsonian’s National Zoo and Conservation Biology Institute. “They made it extremely obvious to us that they were preparing for breeding, and in turn we have been tracking Mei Xiang’s hormones to make sure we didn’t miss the optimal window for an artificial insemination. It’s time to wait and see if we were successful.”

During the past two weeks, Mei Xiang became increasingly restless, wandering her yard, scent-marking, vocalizing and playing in water—all behaviors that increase in intensity before she reaches peak estrus. Tian Tian immediately noticed the hormonal changes in Mei Xiang and began displaying behaviors toward her indicating that he was ready to breed. He vocalized to her and constantly tried to keep her in his sight for the past week. During the past few days, he spent much of his time at the “howdy window” that separates their yards. Mei Xiang did not respond positively to any of Tian Tian’s vocalizations until yesterday.

The panda house will be open as usual today from 9 a.m. to 6 p.m. Visitors can see Mei Xiang, Tian Tian and Bei Bei (BAY-BAY) at the David M. Rubenstein Family Giant Panda Habitat and on the panda cams.

The panda team will not know if the artificial insemination was successful for several months. Giant panda pregnancies and pseudopregnancies generally last between three to six months. Veterinarians will conduct ultrasounds to track changes in Mei Xiang’s reproductive tract and determine if she is pregnant during the next several months. Scientists will also monitor her hormones to determine when she is near the end of a pseudopregnancy or pregnancy. There is no way to determine if a female is pregnant by hormone analysis and behavior alone. Mei Xiang’s hormones and behavior will mimic a pregnancy even if she is experiencing a pseudopregnancy. The only definitive way to determine if she is pregnant before giving birth is to see a developing fetus on an ultrasound.

The Zoo received approval for its breeding plans from the China Wildlife Conservation Association and the U.S. Fish and Wildlife Service, which monitors giant panda research programs in the United States.

The number of giant pandas living in the wild has increased in recent years, causing their status to change from “Endangered” to “Vulnerable” by the International Union for Conservation of Nature. There are an estimated 1,800 in the wild. Scientists and animal care specialists at the Smithsonian’s National Zoo and Conservation Biology Institute work with scientists in China studying giant panda reproduction and cub health, disease and ecology and conservation in the wild.