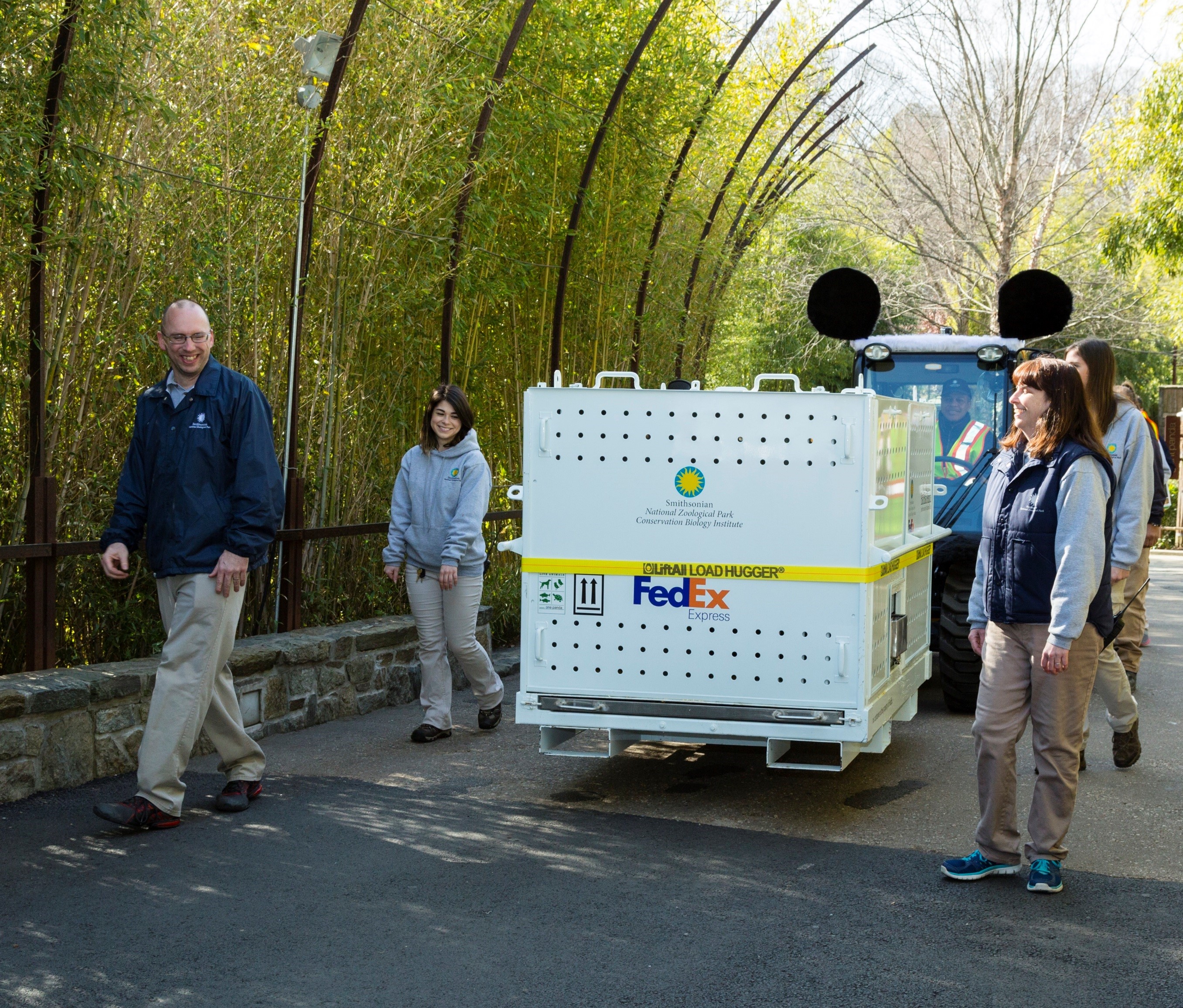 Bao Bao (BOW-BOW), the 3½-year-old giant panda, began her journey to China this morning. She departed the Smithsonian’s National Zoo at 10:45 a.m. for Dulles International Airport in northern Virginia where she will board a FedEx 777F plane bound for Chengdu, China. The non-stop flight will take about 16 hours. Bao Bao’s departure from the Zoo was broadcast via Facebook Live.

This morning, the panda team arrived at 6:30 a.m. to finalize preparations for Bao Bao’s departure. Bao Bao received her morning diet of 17 pounds (8 kilograms) of bamboo and 5.4 (150 grams) leafeater biscuits and spent time in her outdoor habitat. Already acclimated from daily training, keepers Marty Dearie and Laurie Thompson called Bao Bao back indoors and then into the custom travel crate at approximately 9:40 a.m. Zoo staff moved the crate onto a specially decorated forklift that traveled carefully out of the David M. Rubenstein Family Giant Panda Habitat through the Zoo and was loaded onto a FedEx truck. Dennis Kelly, the director of the Zoo, was joined by Ambassador Cui Tiankai from the People’s Republic of China and animal care staff to say goodbye.

“Today is bittersweet,” Kelly said. “We’ve watched Bao Bao grow up during the past three years, and she has charmed people all over the world with her independent and playful personality. We’re so proud of our team who have prepared Bao Bao for the next chapter of her life as she enters the breeding program in China. This is another milestone in our 45-year history of working to study, care for and help save the giant panda and its native habitat.”

The “FedEx Panda Express,” a custom-decaled 777F aircraft, is expected to depart at 1:30 p.m. today from Dulles International Airport. The Zoo will broadcast the departure of the plane on Facebook. The specialized travel crate is made of steel and weighs approximately 800 pounds. Marty Dearie, one of the keepers who has cared for Bao Bao since her birth, and Katharine Hope, veterinarian at the Zoo, will make the 8,508-mile trip with her. They will continuously monitor Bao Bao during the trip and are traveling with a supply of her favorite treats, including 55 pounds of bamboo, 2 pounds of apples, two bags of leafeater biscuits, cooked sweet potatoes and water.

Upon arrival in Chengdu, Bao Bao’s new keepers from China Conservation and Research Center for the Giant Panda will drive her to Dujiangyan Panda Base where she will stay in quarantine for approximately 30 days. The American team will follow, and Dearie will remain with Bao Bao for three days while she acclimates to her new home. It is not confirmed if Bao Bao will remain at Dujiangyan after the quarantine period has ended. Bao Bao will enter the giant panda breeding program when she reaches sexual maturity between 5 and 6 years old.

The panda team prepared Bao Bao for the move to make sure she is comfortable and safe during her journey. To slowly acclimate her to the travel crate, keepers asked Bao Bao to walk through it every day. After she became comfortable doing that, they got her used to spending short periods of time in it with the doors closed.

Bao Bao was born at 5:32 p.m. Aug. 23, 2013, at the Zoo’s David M. Rubenstein Family Giant Panda Habitat. Her name translates to “precious” or “treasure” in Chinese. Both Mrs. Michelle Obama, former First Lady of the United States, and Madame Peng Liyuan, First Lady of China, sent congratulatory messages for her naming ceremony when she was 100 days old. At her first birthday zhuazhou (dra-JO) ceremony, she selected a banner depicting peaches, representing longevity. She is the second surviving cub of her parents Mei Xiang (may-SHONG) and Tian Tian (tee-YEN tee-YEN).

Giant pandas are listed as “vulnerable” in the wild by the International Union for Conservation of Nature. There are an estimated 1,800 in the wild. The Smithsonian’s National Zoo and Conservation Biology Institute is a leader in giant panda conservation. Ever since these charismatic bears arrived at the Zoo in 1972, animal care staff and scientists have studied giant panda biology, behavior, breeding, reproduction and disease. These experts are also leading ecology studies in giant pandas’ native habitat. The Zoo’s giant panda team works closely with colleagues in China to advance conservation efforts around the world. Chinese scientists are working to reintroduce giant pandas to the wild.