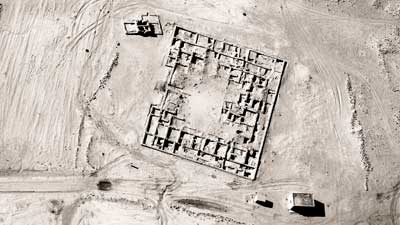 Vast deserts and ancient ruins have defined imagery of the Middle East since the advent of photography in the 19th century. These views of a landscape as a timeless and depopulated space have long fascinated Iraqi-born artist Jananne Al-Ani, culminating in a new work, “Shadow Sites II,” on view in the U.S. for the first time Aug. 25–Feb. 10, 2013, at the Smithsonian’s Arthur M. Sackler Gallery.

The 1991 Gulf War marked a significant moment in the history of visualizing the Middle East. Military technology produced long-distance cartographic images and transmitted them around the globe, sparking artistic responses to a war that seemed more virtual than real. Struck by these images, Al-Ani began to examine the relationship between photography and the enduring perception of the region as a blank canvas. Drawing on Paul Virilio’s writings in particular, Al-Ani developed “The Aesthetics of Disappearance,” an ongoing project of photography and video works, all set in the desert, that explore the absence of the human body.

“Shadow Sites: Recent Work by Jananne Al-Ani” features her latest work in the series, “Shadow Sites II” (2011). Composed of aerial film footage shot in Jordan, she seeks the traces of human presence from a vantage point far above the landscape, reminiscent of early archaeological and World War I reconnaissance photographs. Her camera slowly pans over ancient Roman ruins and remnants of Ottoman trenches, as well as active agricultural and industrial sites. The work is accompanied by “The Guide and Flock” (2008), an earlier two-screen video that led to the development of “The Aesthetics of Disappearance.” Filming an enigmatic figure wandering down a nondescript desert road, Al-Ani noticed subtle variations in the landscape that she would explore further from the air.

The project involved extensive research in various archives, including the Ernst Herzfeld Papers, a significant collection of archaeological documents housed in the archives of the Freer Gallery of Art and the Sackler. A German archaeologist, Herzfeld (1879–1948) took numerous photographs during his pioneering excavations in Iran and Iraq. For the first time, “Shadow Sites II” will be exhibited along with a selection of his original panoramic prints.

“Herzfeld’s prints and Al-Ani’s video works are at opposite ends of the photographic medium and nearly a century separates them, yet both take the desert as their subject,” said Carol Huh, assistant curator of contemporary Asian art. “Exhibited together, they invite reflection on the human relationship to the landscape.”

“Shadow Sites: Recent Work by Jananne Al-Ani” is a highlight of the Sackler’s 25th anniversary year.

Visitors will have the opportunity to hear the artist at the Sackler on Saturday, Aug. 25, 2 p.m., as she joins Huh in a conversation about her research into early photography of the Middle East, and the evolution of her work, from earlier portrait-based projects in the studio to shooting on location.

Al-Ani, born in Kirkuk, Iraq, in 1966 and based in London, uses photography and video to examine the relationship of the body to the photographic image, particularly focusing on visual representations of the Middle East. Her work is in the collections of the Victoria & Albert Museum and the Tate in London, the Pompidou Centre in Paris and Darat al Funun in Amman, Jordan. Exhibited as part of the first pan-Arab show at the Venice Biennale, “Shadow Sites II” was created by Al-Ani as a recipient of the prestigious Abraaj Capital Art Prize 2011, the world’s only art prize to focus on the Middle East, North Africa and South Asia.

The Arthur M. Sackler Gallery, located at 1050 Independence Avenue S.W., and the adjacent Freer Gallery of Art, located at 12th Street and Independence Avenue S.W., are on the National Mall in Washington, D.C. Hours are 10 a.m. to 5:30 p.m. every day, except Dec. 25, and admission is free. The galleries are located near the Smithsonian Metrorail station on the Blue and Orange lines. For more information about the Freer and Sackler galleries and their exhibitions, programs and other events, the public may visit www.asia.si.edu. For general Smithsonian information, the public may call (202) 633-1000.