First Written Treaty Between the U.S. and a Native American Nation To Be Shown at the American Indian Museum

Treaty With the Delawares, 1778, Was Meant To Create an Alliance Between the Lenape and the U.S. During the American War of Independence
April 18, 2018
News Release 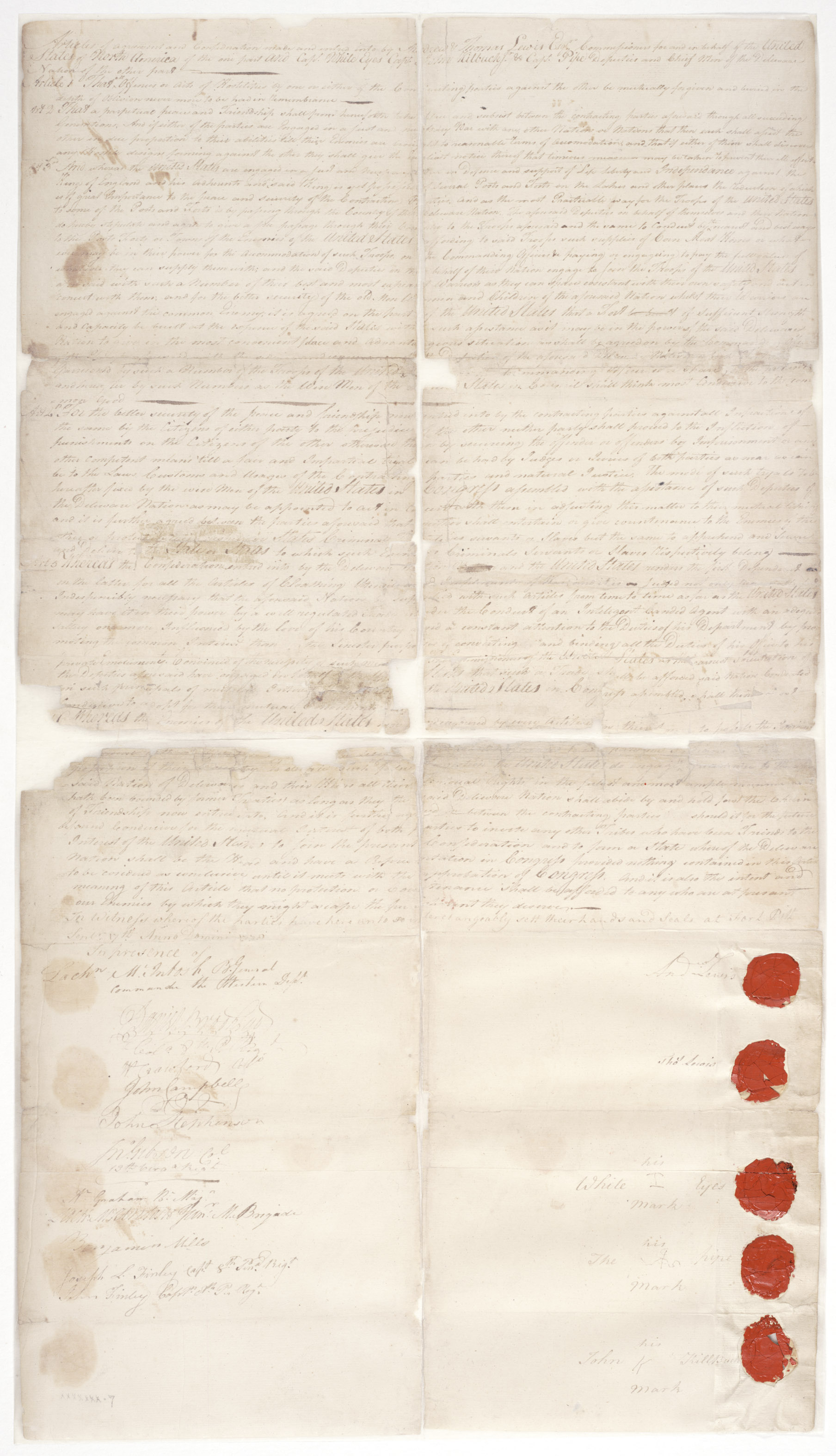 The first written treaty between the United States and an Indian Nation, the Treaty with the Delawares, 1778, will go on display at the Smithsonian’s National Museum of the American Indian May 10. The original document, on loan from the National Archives and Records Administration, will be on view through September as a part of the exhibition “Nation to Nation: Treaties Between the United States and American Indian Nations.”

In an effort to gain support for the Patriot cause, the Continental Congress of the United States dispatched U.S. treaty commissioners to negotiate a treaty of peace, friendship and alliance with the Lenape (Delaware), whose lands were strategically located between present-day Pittsburgh and British-held Detroit. Among other things, the treaty asked that the Delawares provide safe passage for American troops across their tribal lands in exchange for the recognition of Delaware sovereignty and the option of joining other pro-American Indian nations to form a 14th state with representation in Congress. Three Lenape leaders, White Eyes, John Kill Buck Jr. (also spelled Killbuck) and Pipe, signed the treaty Sept. 17, 1778, at Fort Pitt. Eleven Americans, most of whom were military officers, witnessed the signing. Ultimately, many Delawares ended up supporting the British in the War of Independence. Yet the treaty set an important precedent for U.S.–Indian diplomacy. Henceforth, the U.S. would deal with Native Nations as it did with other sovereign nations: through written treaties.

The treaty currently on display is the Treaty between the United States Government and the Navajo Indians Signed at Fort Sumner, New Mexico Territory, June 1, 1868. This treaty allowed the Navajo people to return to their original homelands in the Four Corners region, where Navajo Nation is based to this day. The document has been on display since Feb. 20, 2018. This treaty will be on loan to the Navajo Nation Museum in Window Rock, Arizona, for the month of June.

The National Museum of the American Indian is committed to advancing knowledge and understanding of the Native cultures of the Western Hemisphere—past, present and future—through partnership with Native people and others. Located on the National Mall at Fourth Street and Independence Avenue S.W., the museum is open each day from 10 a.m. to 5:30 p.m. (closed Dec. 25).  The museum is on Facebook, Twitter and Instagram and at AmericanIndian.si.edu.