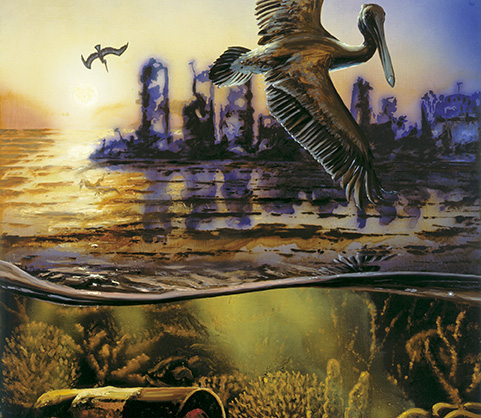 “Alexis Rockman: A Fable for Tomorrow” will be on view at the Smithsonian American Art Museum in Washington, D.C., from Nov. 19 through May 8, 2011. The exhibition is the first major survey of the artist’s work with 47 paintings and works on paper that trace his career from early works in the mid-1980s to the present. A slideshow of selected works included in the exhibition is available on the museum’s website at americanart.si.edu/rockman.The exhibition will travel to the Wexner Center for the Arts in Columbus, Ohio.

Alexis Rockman (b. 1962) has been depicting the natural world with virtuosity and wit for more than two decades. He was one of the first contemporary artists to build his career around exploring environmental issues, from evolutionary biology and genetic engineering to deforestation and climate change. His work expresses deep concerns about the world’s fragile ecosystems and the tension between nature and culture. These concerns are communicated through vivid, even apocalyptic, imagery.Rockman has garnered attention for embracing these issues, as well as for the epic quality of his projects, including several monumentally scaled paintings.

The title of the exhibition, “A Fable for Tomorrow,” is taken from the opening chapter of Rachel Carson’s influential 1962 book Silent Spring. In it, Carson combines two seemingly incompatible literary genres—mythic narrative and factual reportage. Rockman approaches his paintings with a similar intent. He achieves his vision through a synthesis of fantasy and empirical fact, using sources as varied as natural history, botanical illustrations, museum dioramas, science fiction films, realist art traditions dating back to the Renaissance and firsthand field study. The exhibition is organized by Joanna Marsh, The James Dicke Curator of Contemporary Art.

“Alexis Rockman’s cross-disciplinary approach is well suited to the Smithsonian’s long tradition of embracing science and art as complementary ways of understanding our world,” said Elizabeth Broun, The Margaret and Terry Stent Director of the Smithsonian American Art Museum.

“During the past 25 years, Rockman’s art and attitudes have evolved from a focus on the mysteries of nature to the machinations of mankind,” said Marsh. “His artworks demonstrate a steadfast belief in the power of art, literature and film to raise consciousness about key environmental issues. Rockman stands out among the generation of artists who have taken up the mantle of environmental activism for the originality of his vision and the urgency of his message. Through the use of emotionally charged visual ideas—death, decay, ruin and renewal—Rockman has created a stunning body of work that is a reflection of our times and a portent of events to come.”

Throughout his career, Rockman has developed subjects and themes in series. “Alexis Rockman: A Fable for Tomorrow” marks the first time that key paintings from different projects are exhibited together, beginning with the lyrical “Pond’s Edge” (1986), drawn from the artist’s earliest series exploring the field of natural history, to “The Reef” (2009), part of his most recent body of work titled “Half Life,” which combines color-field abstraction and environmental concerns.

The exhibition includes three large-scale paintings that are ambitious turning points in Rockman’s artistic development. “Evolution” (1992), Rockman’s first mural-sized painting, is a panoramic sweep that owes as much to a pop cinema stylistic sensibility as it does to actual prehistory. “Manifest Destiny” (2003-2004), commissioned by the Brooklyn Museum of Art, depicts an apocalyptic vision of the Brooklyn waterfront submerged as the result of global warming. “South” (2008), an epic panorama drawn from the artist’s observations while on a trip to Antarctica,documents every aspect of iceberg geology through simultaneous views above and below the water’s surface.

In 1994, Rockman journeyed into the dense South American jungle of Guyana. Several paintings from this series, including “Bromeliad: Kaieteur Falls” (1994), “Kapok Tree” (1995) and “Host and Vector” (1996), are on display in the exhibition. These paintings are distinguished from Rockman’s other work by his decision to invent nothing and paint only the flora and fauna found in the rain forest. Elements in the works recall 19th-century Hudson River school landscapes by John Kensett and the paintings of Martin Johnson Heade. Rockman returned to Guyana in 1998, when his previous interest in field observation was replaced by a fascination with pop-culture representations of ecotourism and the exotic allure of adventure travel. The resulting series, titled “Expedition,”includes paintings such as “The Hammock” (2000), which includes compositional elements that recall classic science fiction films.

Rockman’s “Big Weather” drawings from 2005 to 2008 mark a major stylistic shift toward abstraction. Executed on heavily gessoed sheets of paper, the painted surface is awash in vivid stains, pours, pools and drips. Rockman’s new focus on process is also evident in the artist’s most recent body of work, “Half-Life.” The “Half-Life” paintings, inspired by the techniques of Color Field artist Morris Louis (1912-1962), are dominated by large veils of viscous pigment and loose, improvisational brushstrokes.

Rockman’s work has been exhibited in the United States, Europe, Russia and Israel. He has been featured in solo exhibitions at the Camden Arts Centre in London (2002) and the Wexner Center for the Arts (2004), among others. Group exhibitions include “Some Went Mad, Some Ran Away” organized by Damien Hirst at the Serpentine Gallery in London (1994), “IntoMe/OutofMe” organized by Klaus Biesenbach at MoMA PS1 in Long Island City, N.Y.(2006) and “Badlands” at MASS MoCA in North Adams, Mass. (2008). He will be included in the 2011 “Prospect.2 New Orleans,” organized by Dan Cameron, director of visual arts for the Contemporary Arts Center in New Orleans. His paintings are in many public collections, including the Museum of Fine Arts, Boston, the Solomon R. Guggenheim Museum, the Whitney Museum of American Art, the Baltimore Museum of Art and the Los Angeles County Museum of Art.

The accompanying book, co-published by the Smithsonian American Art Museum and London-based D Giles Limited, is written by Marsh with contributions from Thomas Lovejoy, biodiversity chair at the H. John Heinz III Center for Science, Economics and the Environment in Washington, D.C.; Kevin J. Avery, senior research scholar at the Metropolitan Museum of Art; and a foreword by Broun. Marsh’s essay weaves thethemes of Rockman’s career and the history of America’s environmental movement into a cohesive narrative. Avery considers Rockman’s art historical references to 19th-century painting, while Lovejoy offers insights in the marriage of art and science in Rockman’s work.The book is for sale ($49.95/$35 softcover) through the museum’s website and store; it will be available at bookstores nationwide in 2011.

The centerpiece of programming for the exhibition is an Art and Science Lecture Series that places the science of climate change within a cultural context. The series features leading environmental scientists and experts in cultural fields who will discuss how scientists and artists are responding to growing concerns about climate change and its impact on the planet. It begins with a presentation by Rockman Wednesday, Jan. 12, at 7 p.m., followed by JD Talasek, director of cultural programs at the National Academy of Sciences, Wednesday, Feb. 9, at 7 p.m. and Lovejoy Wednesday, Feb. 23, at 7 p.m. The series will continue in the spring. Several additional free public programs are planned in conjunction with the exhibition, including a gallery talk with Marsh Tuesday, Dec. 7, at 6 p.m. and an Earth Day Family Day Saturday, April 9, from 11:30 a.m. to 3 p.m. Complete program descriptions are available online at americanart.si.edu.

Note to editors: Selected high-resolution images for publicity only may be downloaded from the museum’s online press room, americanart.si.edu/pr. E-mail AmericanArtInfo@si.edu or call (202) 633-8530 for the password.