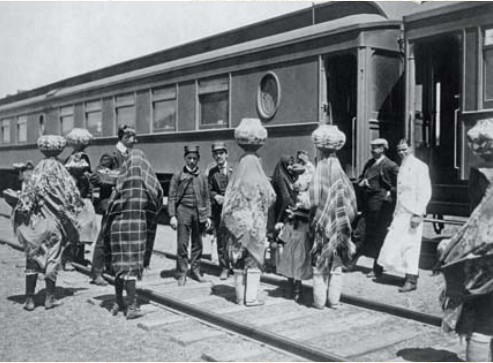 The rapid changes forced on the Native American peoples of the American southwest are documented in “Time Exposures: Picturing a History of Isleta Pueblo in the 19th Century.” With more than 80 images and objects that detail life on the Isleta Pueblo Reservation after the arrival of the railroads in 1881, the exhibition opens Saturday, Sept. 17, at the Smithsonian’s National Museum of the American Indian in New York, the George Gustav Heye Center, and continues through Sunday, June 10, 2012.

In 1881, the railroad companies forcibly took land in the center of Isleta Pueblo in the Rio Grande Valley and the rail lines built there brought scores of tourists. Prominent non-Native artists and photographers, such as Edward Curtis and Ben Wittick, traveled there to capture everyday Pueblo life. Organized by the people of Isleta Pueblo, “Time Exposures” portrays their lives before the arrival of tourists and other visitors, the changes imposed over the following decades and the ways in which the people of Isleta Pueblo worked to preserve their way of life.

“Time Exposures” is divided into three parts. In the first section, the cycle of the Isleta traditional year as it was observed in the mid-19th century is detailed. The second section describes the arrival of the Americans and the how this disrupted the Isleta way of living. In the third section, the exhibit examines the photos themselves as products of an outside culture. While exploring the underlying ideas and values of the photos, the exhibition questions their portrayal of Isleta people and ways. “In this exhibition, Native people respond to the stereotypical images of their lives that have been circulated by outsiders for centuries,” said Kevin Gover (Pawnee), director of the museum. “It is an opportunity for us all to learn the realities behind some of these popular and enduring photographs.”

“These photographs tell such an important story,” said John Haworth (Cherokee), director of the Heye Center. “The people of Isleta Pueblo fought to maintain their traditions despite radical and dramatic disruptions.”

Included in the exhibition are images by photographers Edward Curtis, A.C. Vroman, Karl Moon, John Hillers, Charles Lummis, Carlos Vierra, Sumner Matteson, Albert Sweeney, Josef Imhof and Ben Wittick. “Time Exposures: Picturing a History of Isleta Pueblo in the 19th Century” was organized by the people of the Pueblo of Isleta. A committee of Isleta Pueblo traditional leaders oversaw the development, writing and design of the exhibition. “Time Exposures” originally appeared at the Albuquerque Museum of Art and History in New Mexico.