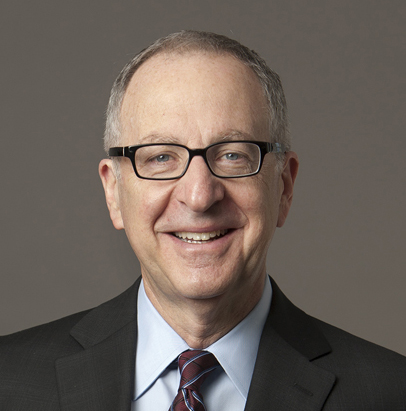 David J. Skorton was installed as the 13th Secretary of the Smithsonian Institution during a ceremony held today Monday, Oct. 19, at the Smithsonian’s Arts and Industries Building on the National Mall.

The Hon. John G. Roberts, Jr., Chief Justice of the United States and Chancellor of the Smithsonian, presided over the ceremony and presented Skorton with a ceremonial brass key that once opened one of the massive oak doors of the Smithsonian Castle.

In his remarks, Skorton stressed the important role the Smithsonian must play in the world. “We face national and global challenges that cry out for the arts, social sciences and humanities to act side-by-side with the life sciences and physical sciences….Our country, and others around the world, look to us for insight and inspiration….We are so fortunate to be the custodians of the greatest treasures of the greatest nation on Earth. Let’s find more and better ways to share them, to understand their significance, to inform, to inspire, to make this world better—a lot better.”

Skorton, the former president of Cornell University, began at the Smithsonian July 1. As Secretary, Skorton oversees 19 museums and galleries, 20 libraries, the National Zoo and numerous research centers, including the Smithsonian Astrophysical Observatory, the Smithsonian Tropical Research Institute and the Smithsonian Environmental Research Center. He is responsible for an annual budget of $1.3 billion, 6,300 employees and 5,400 volunteers.

The ceremony began with a presentation of the Colors by the Smithsonian Color Guard and the singing of the National Anthem. Welcoming remarks were made by John W. McCarter, Jr., Chair of the Smithsonian’s Board of Regents.

An academic procession of scholars followed, highlighting the Smithsonian’s rich and diverse scholarship, expertise and excellence. A member of the Smithsonian Honor Guard led the procession carrying the Institution’s ceremonial mace. It was a representative version of the centuries-old tradition that universities conduct, featuring scholars wearing robes and hoods symbolizing their fields of study and level of academic achievement. Today’s procession of 50 Smithsonian scholars, curators and experts represented their more than 6,000 colleagues and symbolized the Smithsonian’s breadth of expertise across dozens of disciplines and its commitment to founder James Smithson’s mandate “for the increase and diffusion of knowledge.”

At the conclusion of the procession, E. Carmen Ramos, curator of Latino art at the Smithsonian American Art Museum, welcomed the Secretary on behalf of the Smithsonian’s staff and volunteers. Next came remarks from former Smithsonian Secretary Wayne Clough, who retired from the position in December 2014.

Composer and jazz musician Wynton Marsalis then took the stage, joined by the Smithsonian Jazz Masterworks Orchestra, to perform a musical interlude on the trumpet. Marsalis played a Selmer trumpet, which was originally owned and played by Louis Armstrong, one of the world’s most influential and innovative jazz musicians. This one-of-a-kind trumpet was crafted by Henri Selmer specifically for Louis Armstrong in Paris after World War II, during the French recovery period.  The Smithsonian acquired the trumpet in 2008; Marsalis is the first to play it since it became part of the Smithsonian’s collection. This iconic instrument, which is inscribed with Armstrong’s name, will be prominently displayed in the permanent collection of the National Museum of African American History and Culture when the museum opens in the fall of 2016.

After delivering brief remarks, Chief Justice Roberts presented Secretary Skorton with the Ceremonial Key, a symbol of the Office of the Secretary of the Smithsonian Institution. Skorton’s Installation speech followed the presentation.

Skorton addressed his remarks directly to Smithsonian staff, saying, “Your work has a profound impact on visitors, scholars, educators and learners of all ages throughout the world….I am privileged to work with all of you—and each of you—to tell the story of America, here and beyond….I am honored and humbled to serve as your 13th Secretary.”

The demi-lion holding a golden sun that tops the mace was adapted from the crest figure of the coat of arms of Sir Hugh Smithson, James’ father. In heraldry, the sunburst signifies “the light of heaven” and “the fountain of life.” The lion rests on a piece of Smithsonite. The shaft of the mace is entwined with a gold ribbon engraved with the names and terms of office of the first eight Smithsonian Secretaries.

The Badge of Office

The Smithsonian’s Badge of Office was conceived of and fabricated at the same time as the mace. It is a thick, irregularly shaped medallion made of 18-carat gold that hangs from a cherry-red ribbon. Cast in high relief and set within a deeply recessed square on the front is the owl of Athena, a symbol of wisdom, and an olive branch, a symbol of peace and goodwill. The owl has forward-gazing eyes that are set with a pair of large, yellow sapphires. To the side of the owl is engraved the Institution’s mandate as defined in Smithson’s will: “For the Increase and Diffusion of Knowledge Among Men.” The back is engraved with the sunburst seal of the Smithsonian and “James Smithson, 1765—Bicentennial 1965.”

The tradition of passing the Smithsonian key to the incoming Secretary originated for the 1964 induction of S. Dillon Ripley as the eighth Secretary of the Smithsonian. In lieu of the administration of an oath of office, outgoing Secretary Leonard Carmichael proposed a key-passing ceremony based on similar ones frequently used in the inauguration of university presidents. The key was presented in 1964 to Ripley by Chief Justice Earl Warren, Chancellor of the Smithsonian. The large brass key dates to the mid-19th century.

The Arts and Industries Building

The Arts and Industries Building, which opened in 1881 as the U.S. National Museum, closed in January 2004 to undergo a structural evaluation and extensive renovation. Recent work on the building included installing more than 800 new custom windows that match the appearance of the originals, reinforcing and replacing some original iron trusses with steel, repairing the brick façade and replacing the 2.5-acre roof. This phase of renovation, paid for with federal funds, was completed in 2014.

The Secretary’s Installation ceremony is the first public event in the building since it closed for renovation. Among the many changes in the still-unfinished building are: Vast soaring spaces, 60 feet high, once divided by floors and partitions, have been reopened; some of the original painting and plaster have been uncovered; and the windows, no longer tinted white, offer views of the National Mall and gardens around the building. The restoration allows daylight throughout the building, reducing the need for artificial light. The goal of the renovation is to give people the same sense of wonder the first visitors experienced when the building, designed by Adolf Cluss and Paul Schulze, opened to the public in 1881.

The building was partially restored to its Victorian appearance for the 1976 U.S. Bicentennial celebration, when it housed a re-creation of the 1876 Philadelphia Centennial Exposition. After the Bicentennial exhibition, the Arts and Industries Building became a Smithsonian office building and a showcase for temporary exhibitions.

The Arts and Industries Building will be open for special events and temporary programming beginning in spring 2016. 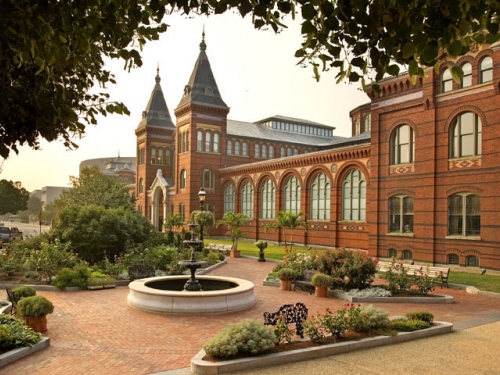