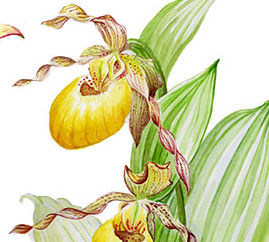 A new traveling exhibition, “Losing Paradise? Endangered Plants Here and Around the World,” will open at the Smithsonian’s National Museum of Natural History Aug. 14. The exhibition, a collaborative effort between the American Society of Botanical Artists and the museum, showcases botanical illustrations and features work from several renowned artists, including Alice Tangerini, one of the museum’s acclaimed scientific illustrators.

Focusing on global conservation, the exhibition will educate the public about endangered, threatened and extinct plants. Additional custom content designed by the museum for this venue highlights the unique and provocative way scientists and conservation biologists are approaching the loss of plant biodiversity—particularly through their work with botanical artists whose captivating and scientifically accurate images serve as an essential historical record of plant species.

With 44 framed artworks by various international artists from Australia, Brazil, Israel, South Africa, South Korea, the United Kingdom and the United States, eight interpretive panels, two cases of specimens and objects from the museum’s botany collection, “Losing Paradise?” tells the valuable and fascinating story of species like the Gentiana pneumonanthe, or Marsh gentian. The Marsh gentian, native only to the United Kingdom, exemplifies the interdependence of species; with its decline, the Alcon blue butterfly is also put at risk for extinction, as it depends on the plant for survival. Other stories include the recent discovery of a new species, the critically endangered Mortoniodendron uxpanapense. It was found when researchers re-evaluated collections from the 1980s, and it is documented through artistic illustration using the museum’s herbarium specimens.

A companion catalog, coauthored by exhibition curator and conservation biologist Gary Krupnick, will accompany the exhibition. The catalog expands on the stories of each plant included in the exhibition and the methods taken by the artists to visually capture the endangered specimens.

“Determining which species are endangered is a complicated endeavor,” said Krupnick. “With conservation assessments of plant species woefully behind, we are devising ways to use data from historically collected specimens to identify rare and endangered plant species. The museum’s work in conservation assessment is critical as each year more species are lost to habitat destruction and degradation.”

The museum will offer free programming in conjunction with the exhibition that will educate visitors about the critical role scientific illustration plays in this conservation initiative. On Mondays, beginning Aug. 16 and continuing through December, there will be a live illustration program: The Scientific Illustrator Is In. It will feature guest botanical illustrators creating illustrations with digital illustration technology and traditional media and answering visitors’ questions.