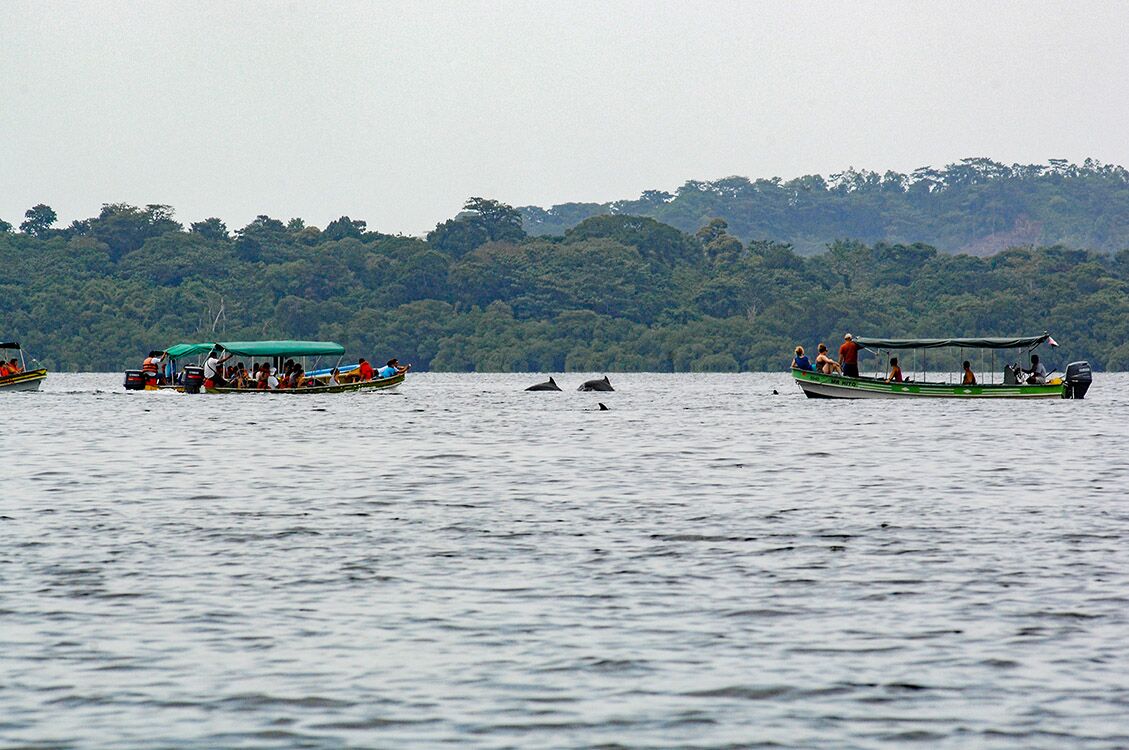 Bottlenose dolphins in Panama’s Bocas Del Toro Archipelago should be designated as endangered say the authors of a new study. Biologists working at the Smithsonian Tropical Research Institute discovered that the roughly 80 dolphins in the archipelago do not interbreed with other Caribbean bottlenose dolphins. Their low numbers jeopardize their long-term survival, which is threatened by increasing local boat traffic that killed at least seven dolphins in 2012.

Worldwide, the common bottlenose dolphin (Tursiops truncatus) is considered of “least concern” on the International Union for Conservation of Nature’s Red List of Threatened Species. But this belies the risk faced by the Bocas dolphin population, which the study suggests was founded by a small dolphin family a few thousand years ago. In addition, the dolphins of Bocas also appear to have no meaningful exchange with the nearest permanent dolphin population, only 35 kilometers (22 miles) away in Costa Rica. These open-water dolphins seem to steer clear of the murky green waters around the archipelago.

Researchers concluded that the small—and possibly decreasing—Bocas dolphin population should be of great conservation concern.

“Our results indicate that the population of dolphins in Bocas Del Toro is genetically isolated from other populations in the Caribbean, and given the high impact of boat traffic on the animals, we suggest that its conservation status be changed, at least at a local level,” said visiting Smithsonian scientist and the study’s lead author Dalia C. Barragán-Barrera, from Colombia’s Universidad de los Andes. “Conservation priorities are largely dependent on the IUCN conservation status of the species.”

A special IUCN or local conservation status for an isolated bottlenose dolphin population is not unique. Subpopulations or subspecies in the Mediterranean Sea, the Black Sea and Fiordland in New Zealand, range from vulnerable to critically endangered.

For the study, Barragán-Barrera sampled skin from 25 dolphins. The genetic results showed the dolphins all shared the same haplotype—a set of genes inherited from a single mother. The haplotype has not been found in any other Caribbean dolphins, suggesting that the population has long been isolated. Her findings suggest that the dolphins have adapted to this unique marine ecosystem of turbid, mangrove-surrounded waters, which are shallow, sheltered from waves and free from large predators.

Field research was conducted at STRI’s Bocas Del Toro Research Station and published Dec. 13 in the journal PLOS One.

The findings are the latest from a research group led by Laura May-Collado, a lecturer at the University of Vermont, who began studying Bocas dolphins in 2004 during her doctoral research. During that time, May-Collado and her team have seen an explosion in dolphin-watching tourism. During the high season (between November and March), dolphins interact with as many as 100 tourism boats per hour.

In addition to expanding understanding of the biology, ecology and genetics of the dolphins of Bocas, her team has studied human impact on the cetaceans. Their work shows how boat noise affects dolphin communication. They have also documented fatalities and injuries caused by boat strikes and entanglements with fishing nets. Their work with the local tourism industry has had some degree of success.

“Because of the pressure of the dolphin-watching industry on this population and the impending threats to the dolphins, the International Whaling Commission made four recommendations to the government of Panama to develop strategies to protect this population,” the researchers said. “Despite these recommendations, dolphin-watching industry continues to grow and impact the dolphins of Bocas Del Toro.”