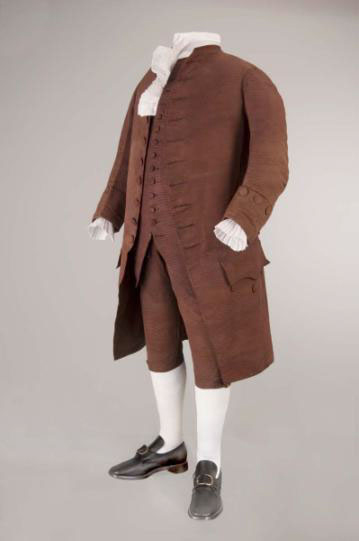 The Smithsonian’s National Museum of American History is adding Benjamin Franklin’s three-piece silk suit, worn on his diplomatic trip to France in 1778 that resulted in the signing of the Treaty of Alliance, to its permanent collection. The suit had been on loan to the museum for conservation and research purposes from the Massachusetts Historical Society in Boston.

The Society agreed to allow the museum to purchase the suit in order to ensure its long-term care as a national treasure. The purchase was made possible through the donation of Marilyn L. Brown and Douglas N. Morton and matching funds from the Charles Bremner Hogg Jackson Fund.

The suit, including a coat, waistcoat and breeches, is more than 230 years old and although it is structurally sound, the fabric’s dye is extremely fragile. The dye, originally a plum color, is turning into more of a light brown and conservators can see that it is puckering and flaking in places. The museum is developing a conservation plan based on research on these areas to determine how best to continue to preserve the suit.

A document accompanies the suit, written by Elkanah Watson, the man who donated it to the Massachusetts Historical Society in 1803. This letter, half printed and half written in Watson’s own hand, describes the night he acquired the suit. The letter relates a story that in 1781, Watson commissioned a Mrs. Wright, a sculptor and somewhat eccentric character, to create a wax likeness of Franklin. When Watson and Wright dined with the diplomat in Paris, Wright suggested that the likeness needed a suit, to which Franklin responded by ringing for his servant and directing him to bring the one he had worn in 1778.

“There is no doubt this is a very important, iconic piece of clothing,” said Nancy Davis, a museum curator in the Division of Home and Community Life. “During a time of opulence at the French court, Franklin’s choice of clothing represented how he wanted to present America to the French: portraying honesty, directness and simple elegance. And this symbolizes the way Americans continue to represent themselves.”

The Treaty of Alliance, signed Feb. 6, 1778, was a defensive alliance between the United States and France against Great Britain during the American Revolutionary war. Franklin, along with several other diplomats, negotiated this relationship in a way that it would be influential in the war against the British. The French provided the newly formed United States with supplies, arms, ammunition, uniforms and navy and troop support. In a collection of Watson’s memoirs, Franklin is described as having the full respect of the French people and of being “treated with an esteem similar to the French nobility.” He was recognized and revered across France, and Watson held him in high regard as well.

The Franklin suit has been on limited display in the museum due to its fragility. It was first shown in an exhibition called “Growth of the U.S.” that closed in 1974. It did not go on view again until the tricentennial of Franklin’s birth in 2006. And its most recent display was as part of the opening of “American Stories” in April 2012. There are no immediate plans for future display.