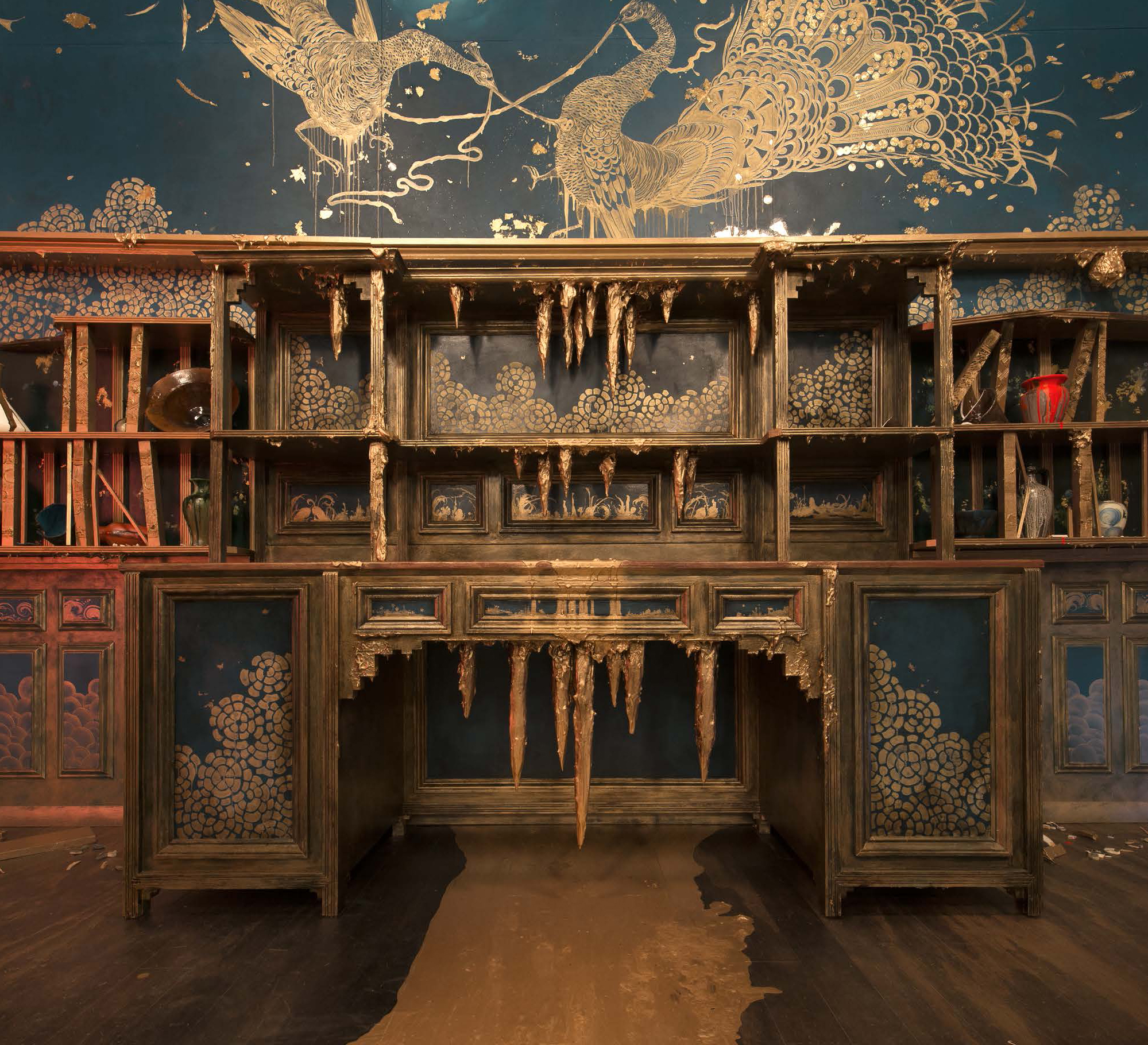 “Filthy Lucre,” an immersive interior by painter Darren Waterston, reimagines James McNeill Whistler’s famed Peacock Room, a sumptuous 19th-century dining room and icon of American art, as a magnificent ruin, literally overburdened with its own materials, creativity and tortured history. Opening May 16, at the Smithsonian’s Arthur M. Sackler Gallery, the room is the centerpiece of “Peacock Room REMIX,” an exhibition that probes the dramatic and occasionally unresolved tensions between art and money, ego and patronage, and the Peacock Room’s own exquisite beauty and contentious past.

In “Filthy Lucre,” Waterston replicates almost all the details of Whistler’s masterpiece while transforming them with images of destruction and excess that draw parallels between the economic inequalities of the Victorian age and today. The exhibition is the only chance for visitors to experience Waterston’s creation alongside the original Peacock Room, which is a permanent showpiece of the adjacent Freer Gallery of Art.

“Peacock Room REMIX” is inspired by both the artistic mastery demonstrated by the room—long regarded as the period’s greatest surviving decorative interior—and Whistler’s bitterness over its creation. Initially invited by his friend and patron Frederick Leyland to consult on the room’s color scheme, Whistler proceeded to cover every inch with painted peacock motifs in shimmering golds, blues and greens. Leyland was furious at Whistler’s audacity, and the home-makeover gone awry spiraled into a clash over artistic freedom. Fueled by dueling egos, the argument was splashed across London’s society tabloids, turning the once-intimate friends into mortal enemies.

“Darren Waterston’s ‘Filthy Lucre’ is a remarkable work in its own right, and it also gives us a new appreciation for the intense, even visceral, emotional afterlife of the Peacock Room,” said Lee Glazer, associate curator of American art at the Freer Gallery of Art and Arthur M. Sackler Gallery. “Far from being a static monument, the Peacock Room continues to inspire artistic ambition and creation.”

Waterston explained, “I set out to recreate Whistler’s fabled Peacock Room in a state of decadent demolition—a space collapsing in on itself, heavy with its own excess and tumultuous history. I imagined it as an unsettling cacophony of excess, with every interior surface and object within sumptuously painted.”

“A vision of both discord and beauty, the once-extravagant interior is warped, ruptured and in the process of being overtaken by natural phenomena: stalactites hang from the mantelpiece, light fixtures morph into crystal-like formations and moss and barnacles cover the walls,” he described. “Painted vessels sit broken and scattered, or drip fluorescent glazes down the latticed shelves. The shimmering central mural melts down the wall onto the floor in a puddle of gold. From her perch above the fireplace, the painting of the reigning ‘Porcelain Princess’—depicted in fantastical deformity—oversees the unsettling scene.”

To step into “Filthy Lucre” is to enter an alternate reality where beauty is pushed to its limits and goes awry. A soundscape created for the space by Washington, D.C.-born, New York City-based girl rockers BETTY emanates from the walls, resonant with muffled voices and mournful cello. An eerie orange light glows behind the shutters of the room’s windows, and the fighting peacocks—named in Whistler’s mural “Art and Money; or, The Story of the Room”—turn violent in Waterston’s version, gruesomely disemboweling each other.

On view through Nov. 29, 2016, the larger exhibition “Peacock Room REMIX” features a changing series of related installations, beginning in May 2015 with portraits of the Leyland family by Whistler and Waterston’s preparatory studies for “Filthy Lucre.” Later iterations will explore Whistler’s “Lost Symphony,” a never-completed painting intended for the Peacock Room (February–May 2016) and the craze for Chinese blue-and-white porcelain in the Victorian era and today (June–November 2016).

The title “Filthy Lucre” is inspired by a vengeful caricature Whistler painted called “The Gold Scab: Eruption in Frilthy Lucre (The Creditor)” (1879), depicting Leyland as a hideous, grasping peacock, mocked for his miserliness and his unfashionable frilly shirts. The painting will also be featured in the exhibition, on loan from San Francisco’s de Young Museum.

“Filthy Lucre” even mimics the modular construction of the original Peacock Room, which allows it to be painstakingly deconstructed in its current location at Massachusetts Museum of Contemporary Art in North Adams, Mass., and reassembled in the Sackler Gallery. Waterston created the work during an artist residency at MASS MoCA, where it debuted as the centerpiece of the exhibition Darren Waterston: Uncertain Beauty (March 8, 2014–Feb. 22, 2015). The catalog, “Darren Waterston: Filthy Lucre,” features all-new color photographs, essays by Glazer, MASS MoCA curator Susan Cross and John Ott, associate professor of art history at James Madison University and a scholar of patronage, museum and markets (160 pp., 90 pp. color, Skira Rizzoli, ed. Susan Cross, $50, hardcover).