Annual Children’s Festival Focuses on Taíno Culture of the Caribbean

Visitors to the Smithsonian Museum Can Learn About Indigenous Foods, Petroglyphs and Traditional Stories
May 1, 2019
News Release 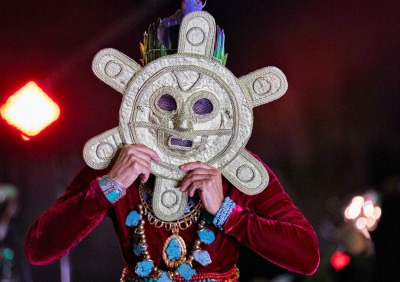 Taíno culture takes the spotlight in the 21st annual Children’s Festival at the National Museum of the American Indian’s George Gustav Heye Center in New York, Saturday and Sunday, May 18–19, 11 a.m. to 5 p.m. each day. Inspired by the exhibition “Taíno: Native Heritage and Identity in the Caribbean,” the festival schedule will include make-and-take activities, games and performances by Taíno artists.

During the festival, visitors will learn how Taíno culture is expressed and experienced today. Hands-on activities include making maracas, weaving a hammock and decorating buttons and terracotta pots with designs inspired by petroglyphs. An interactive station modeled after a bodega shows how corner stores found all over New York City serve similar functions of conucos, or traditional community gardens, in Taíno communities within the Caribbean. A museum educator will be on hand to teach visitors about the native foods of the Caribbean regularly found in New York’s neighborhood stores.

In addition to the hands-on activities, visitors may participate in interactive dance with Irka Mateo or listen to traditional stories told by Bobby Gonzalez. Mateo spent 10 years on a Grammy Foundation-supported initiative researching and documenting more than 13 genres of musical traditions in the rural areas of the Dominican Republic. Gonzalez, a renowned storyteller and poet,  has performed at Carnegie Hall, the Nuyorican Poets Café and the Brooklyn Museum of Art.

The National Museum of the American Indian is committed to advancing knowledge and understanding of the Native cultures of the Western Hemisphere—past, present and future—through partnership with Native people and others. The museum’s George Gustav Heye Center is located at One Bowling Green in New York City. For additional information, including hours and directions, visit AmericanIndian.si.edu. Follow the museum via social media on Facebook, Twitter and Instagram.