Museums To Present Programs That Highlight the Enduring Ideals of JFK
May 30, 2017
News Release 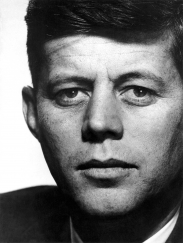 “America Now,” a collaboration of programs jointly organized by three Smithsonian museums, has unified under the theme of JFK 100 to celebrate the centennial of President John F. Kennedy’s birth. The National Portrait Gallery, National Museum of American History and Smithsonian American Art Museum will present multiple programs on three consecutive Saturdays this summer, between June 17 and July 1, designed to engage a variety of audiences in the American experience.

All events with one exception are free and open to general audiences. This third annual “America Now” collaboration on programming is made possible by the support of the Robert and Arlene Kogod Family Foundation. The Washington Post is the media sponsor of “America Now.” Details are outlined below and at americanow.si.edu. Visitors can join the conversation about the centennial celebrations at #JFK100.

The Portrait Gallery joins the nationwide celebration of the life and legacy of Kennedy to honor his centennial, illuminating his contributions, challenges and policies in the wake of the civil rights era and present. The event features Citizen Cope and Alice Smith, whose repertory will include songs focus on justice and freedom, two ideals that Kennedy championed. Other activities include an interactive experience with artist R. Luke Dubois, summer cocktails and light food in the museum’s courtyard for purchase, and a scavenger hunt though the museum’s galleries, which include portraits of Kennedy, his family and his contemporaries.

Kennedy’s administration is often associated with a golden age for art and culture in the United States. As part of the nationwide commemoration of his centennial, the museum is presenting performances that speak to Kennedy’s ideals of courage, freedom, justice, service and gratitude. Dancers from The Washington Ballet will perform excerpts from “WHO WHEN WHY,” a newly commissioned work by choreographer Mimmo Miccolis inspired by Kennedy’s famous quote “If not us, who? If not now, when?” The hip-hop group Liner Notes will perform a multimedia show of live music, poetry and visuals inspired by 1960s music and culture. Other activities include a photo op with wax figures of Kennedy and First Lady Jacqueline Kennedy from Madame Tussauds, a photo booth and a scavenger hunt. Snacks and beverages will be available for purchase from the museum’s Courtyard Café.

Visitors can join the museum’s Lemelson Center for the Study of Invention and Innovation for an afternoon of discussion and performances exploring the community origins of go-go through a common history of jazz. Between two high-energy performances by local go-go band legends Kenny Lattimore and Team Familiar, panel members, including Smithsonian and local scholars, will connect the community and cultural roots of these music genres through the civil rights era.

The Kennedy era’s impact on today will be explored through lightning talks, 1960s-themed food and drink, objects-out-of-storage at the museum’s “We the Party People: JFK Centennial,” an after-hours event presented with Brightest Young Things. This non-partisan celebration will explore how Americans have participated in their democracy. For more information on this ticketed and 21+ event, visit s.si.edu/americanow.