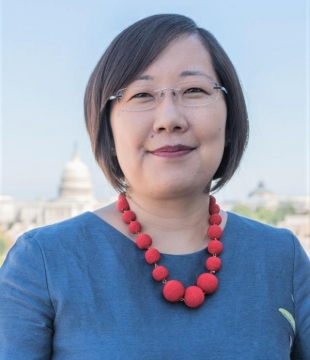 Photo by Emmanuel Mones
Under Secretary for Museums and Culture

The Smithsonian American Women’s History Museum advances the understanding of women’s contributions to various fields throughout history that have influenced the direction of the United States. Sasaki is guiding the museum’s collaboration efforts with other museums and educational institutions to expand scholarly research, public programs, digital content, collections and more in recognition of diverse perspectives on women’s history and contributions.

Before joining the Smithsonian, Sasaki was the director of the Audience and Civic Engagement Center at the Oakland Museum of California from 2012 until 2016. Sasaki was also the director of program development at the Japanese American National Museum in Los Angeles, the museum curator at the Southeastern Colorado Heritage Center in Pueblo and an assistant collections manager at the Denver Museum of Nature and Science.
Sasaki earned her bachelor’s degree in history and archaeology from Cornell University and her master’s degree in anthropology from the University of Denver. She served as president of the Western Museums Association’s board of directors and as a member of the American Alliance of Museums’ Facing Change working group, the Center for the Future of Museums’ Horizon Initiative steering committee and the advisory council for the Council of Jewish American Museums. She frequently guest lectured for the museum studies graduate programs and has also lectured internationally for ICOM-China and the Museums and Galleries of Queensland.