Shutter Interface, from 1975, is a multi-projector film installation that contains key components found in many of Sharits' experimental pieces, such as the use of endless film loops and an avant-garde soundtrack. View Shutter Interface on display.

The artwork consists of four 16mm film projectors standing in a line on black pedestals in a darkened gallery, each projector illuminating its respective flickering film loop directly onto the wall, arranged so that the four images overlap with each other by approximately 1/3 on either edge. The projected images are solid colors that transition and flicker rapidly, occasionally interspersed with black frames. Each film is a unique sequence of colors and each is of a different length. The result is an infinitely variable combined image.

Concurrent with the ever-changing, overlapping color fields is an audio track: a 100-kilocycle tone emanating from each projector and intermittently interrupted by silence. The high frequency tones correspond to the appearance of the black frames, calling attention to the shutter's revolving wheel that creates the 'interface' between illumination and darkness as the film passes through the projector.

The central idea was to create a metaphor of the basic intermittency mechanism of cinema: the shutter. If one slows down a projector, one observes a "flicker"; this flickering reveals the rotating shutter activity of the system. Instead of slowing down a projector, one can metaphorically suggest the frame-by-frame structure of film (which is what necessitates a shutter blade mechanism) by differentiating each frame of the film by radical shifts in value or hue; this metaphor was a guiding principle in my work in the 1960's, in my so-called "color flicker films". I discovered, two years ago, that I could heighten this metaphor by partially overlapping two screens of related but different "flicker footage" and the conception of four overlapping screens began to evolve. For installation pieces, I prefer to use long film loops, each a slightly different length, so that the relationships within the system go through many phases, maintains the piece seem to be beyond duration, to exist as on-going environments of visual-aural activity (I regard them as "locations").

Restoration of the work to its original four-projector version, acquired by the Hirshhorn Museum in 2009, was the result of efforts carried out by Anthology Film Archives in conjunction with the Sharits Estate. Working from Sharits' original 16mm film elements, as well as his notes, sketches, and specifications, Anthology produced new 16mm preservation and printing negatives and an accompanying 'locational' installation manual with detail exhibition instructions and diagrams.

One of the greatest challenges this particular artwork poses is the fact that the projectors themselves are an older technology that is already considered to be obsolete. Media industries have moved away from film and into digital formats and, consequently, the available film stock and film projection equipment - along with individuals who are familiar with their repair are quickly disappearing. These factors place Shutter Interface in an especially precarious place in terms of its long-term preservation.

As a preservation measure, the projectors utilized for this artwork are given the status of dedicated equipment, which means that they are not used in the display of other artworks. The hours they are on display are tracked, and proper cleaning and regular maintenance is carried out to ensure that Shutter Interface can be experienced as the artist intended for as long as possible. 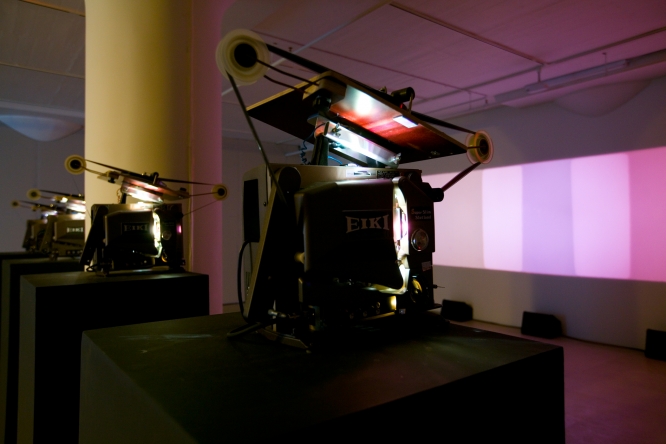 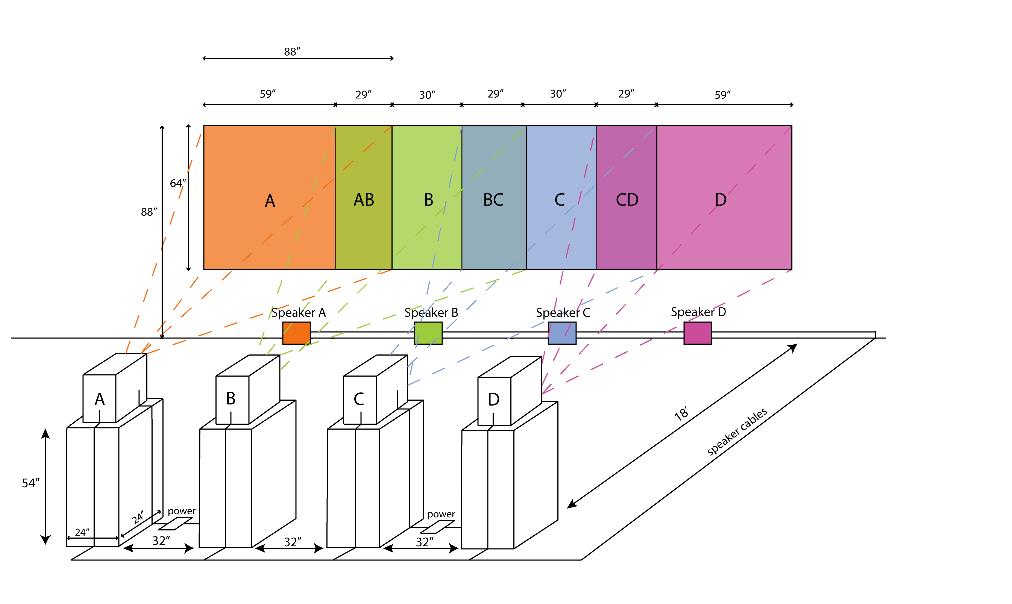 Essential to maintaining Sharits' original configuration, without the artist's direct input, has been the detailed documentation he created regarding its installation. His diagrams specify, to the centimeter, the required dimensions for the projected images including their size, the overlap between the projections, their height from the floor, the distance between the projectors and the wall, and the height of the podiums on which the projectors are mounted. These notes assist greatly in the preservation of the overall experience that a viewer will have in encountering the artwork and represent the types of information that is sought after when time-based media installations are acquired.

With the display of any film-based installation, the original or 'Master' film is not utilized for exhibition. Instead, exhibition copy prints are made, which can be replaced as needed while the work is on view. Each film print, running continuously through a projector for as much as eight hours a day, can be expected to last only about two weeks before visible fading and physical damage occur. The Hirshhorn's Media Preservation Team is responsible for ensuring there are a sufficient number of preservation copies made, verifying that the prints are of the appropriate quality, monitoring the ongoing wear to the prints so that they can be replaced as necessary, and recording the frequency of replacement as information that can be used when preparing for future display iterations.

In 2008, the Hirshhorn Museum established the Media Preservation Team, whose primary focus is on the long-term preservation of the media art collection. The interdisciplinary team consists of a registrar, conservators, curators, a media coordinator, and the director of exhibitions and is integrally involved in the acquisition, installation, and preservation of all of the Hirshhorn's media holdings.

About the Artist
Paul Sharits was born in 1943, in Denver Colorado, and by his late 20's had established himself as a visual artist, most widely acknowledged for his work in highly experimental and avant-garde film. Prior to his death in 1993, he built a substantial body of film work in what has been called the structural film movement. Learn more about Sharits via the website maintained by his estate.