In 2012, SONG 1 by Doug Aitken, a commissioned site-specific artwork for the Hirshhorn Museum and Sculpture Garden, went on view. This complex installation is a 7-channel video projection that utilizes 11 projectors to create a 360 degree image on the curved exterior of the museum. It plays in a 35-minute loop with an audio component comprised from contributions of over a dozen pop and indie-rock singers performing the ballad "I Only Have Eyes for You."

During the planning and installation phases, copious documentation was gathered on the decision making process including communication chains with the various entities, spread sheets of the individual pieces of equipment and their specifications, along with extensive and highly detailed wiring and architectural diagrams of the cabling and equipment locations. The conservation and exhibition staff relied on video documentation to record the navigation steps through the software that were necessary to follow during the duration of display. A video recording of the artwork while it was up and running was conducted in collaboration with the artist's studio and the Museum and functions as an essential record of the artist-approved iteration and the overall experience of the viewer.

After the exhibition was completed, the Media Preservation Team at the Hirshhorn conducted an interview with WorldStage to review the process, discuss the ways in which the installation was successful, and explore areas where it could be improved. This was also an opportunity to clarify that the previous documentation that had been collected was thorough and accurate. The interview was recorded; the recording and a written transcript were both archived as components of the preservation plan for the artwork. Compiling these various forms of documentation is an important measure in the preservation of a computer-based artwork, not just during the first installation, but for each subsequent iteration. The accumulated knowledge gained acts as a guide, providing the essential information to future caretakers of the various logistical issues that may need to be considered, but will also assist those in the future that are charged with making the highly technical decisions related to the eventual migration and preservation needs of this complex artwork.

Image below: Video still from recorded session with Worldstage instructing the Hirshhorn's Media Preservation Team on the navigation through the software program necessary while the artwork is on display. 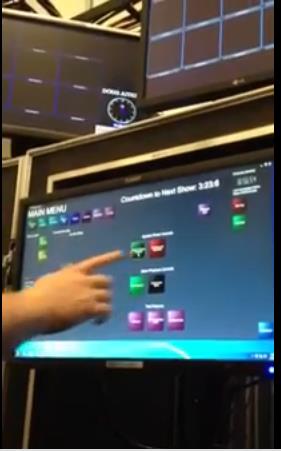 Laid out flat, SONG 1 is a moving image approximately 13,000 pixels wide. In order to wrap it around the building, the image was cut into eleven, overlapping sections (one for each projector) that were then manually stitched together by a programmer who matched the overlapping sections utilizing specialized software. Learn more about this setup in an article from The Washington Post.

Upon initial conception of this commission in late 2010, the Hirshhorn's Media Preservation Team was incorporated into the very detailed process of planning and executing the installation with the production company WorldStage, based out of New York. Extensive collaboration with the Hirshhorn's Building Management Department, Horticulture Services Division of the Smithsonian, and even the Federal Aviation Administration was necessary to coordinate all aspects of the installation and display.

In 2008, the Hirshhorn Museum established the Media Preservation Team, whose primary focus is on the long-term preservation of the media art collection. The interdisciplinary team consists of a registrar, conservators, curators, a media coordinator, and the director of exhibitions and is integrally involved in the acquisition, installation, and preservation of all of the Hirshhorn's media holdings.

About the Artist
Doug Aitken was born in California in 1968 and currently lives works in New York and Los Angeles. He is widely known for his innovative art installations that incorporate an array of media and artistic approaches. Learn more about Doug Aitken and select examples of his installations.