The Substitute, by designer Alexandra Daisy Ginsberg, is an immersive video and sound installation in which the nearly extinct northern white rhino is digitally resurrected in a virtual white room. The work was commissioned by Cooper Hewitt, Smithsonian Design Museum and Cube design museum for the exhibition Nature—Cooper Hewitt Design Triennial, on view in New York from May 14, 2019 to January 20, 2020.

In its premier installation at Cooper Hewitt, the work consists of a floor-to-ceiling video projection at one end of a darkened gallery and a plinth with a small secondary screen located mid-gallery. A rhino appears on the primary screen confined to a white room. His form and sound are heavily voxelated and distorted. This rhino is an artificial agent. He begins his life unaware of his surroundings. Using data generated by cutting-edge AI research at Google’s DeepMind, the rhino will begin to learn his way around the enclosed space, gaining intelligence. As he gains intelligence, his form becomes less and less voxelated, his sounds less and less distorted until they are so highly resolved and clear that he is lifelike. The rhino stares back at visitors, confined to his room, divorced from the natural habitat where his living counterparts once roamed, before he disappears.

With this work, Ginsberg questions the paradox of humans’ fixation with creating new life forms while neglecting existing ones. Northern white rhinos (Ceratotherium simum cottoni), the most social among rhinos, once roamed the grasslands and savanah woodlands of countries in East and Central Africa. In the twentieth century, their populations were decimated by habitat loss and poachers who killed the rhinos for their horns. On March 19, 2018, the last male northern white rhino, Sudan, died in a conservancy at age 45. With his death, the species is functionally extinct. Only two females remain (as of September 2019) and they are both too old to reproduce.

Scientists extracted Sudan’s DNA and stored it in lab freezers. Researchers are undertaking experimental de-extinction projects using his genetic material. Already in August 2019, scientists successfully fertilized eggs extracted from the remaining two females using sperm from male rhinos that had died, a critical step in de-extinction. The next phase will require a surrogate pregnancy—likely transplanting fertilized eggs into a southern white rhino to gestate. But as Ginsberg questions with The Substitute, why would the technological northern white rhino be more worthy of our care than the natural animal that existed before? Would this resurrected animal be a northern white rhino if it had no other northern white rhinos from which to learn its behaviors?

As much as it is a provocation, The Substitute is a design feat made using digital tools and technologies. Ginsberg and her team generated the rhino’s paths, documented in The Substitute’s secondary video, using DeepMind artificial intelligence (AI) navigational techniques based on research led by Andrea Banino. Efficient spatial navigation is a cognitive challenge for AI. Mammals use specialized neurons called grid cells to map space. Banino et al’s research at DeepMind demonstrates that an artificial agent can develop grid-cell representations on a two-dimensional grid as the agent moves around a contained environment. The Substitute’s rhino begins his life with no grid cells. As he moves around his enclosed space, he gains them, becoming increasingly intelligent.

Visual Effects firm The Mill created a computer-generated model of a rhino, modified it to meet the specifications of a northern white rhino, and animated it to trace the path generated by the AI and visualized in a virtual white room. The rhino’s behaviors, as well as his sounds, were adapted from twenty-three hours of rare archival footage of the last herd of northern white rhinos captured by Dr. Richard Policht, an expert in rhino vocalization. Ginsberg and her team combed through the footage and identified key behaviors to simulate in the CG model. The rhino’s sounds—his stomps, snorts, grunts, and squeaks—are a composite created by sound designer Chris Timpson from the Policht footage. As the rhino habituates to his environment, his form and sound progressing from voxelated to lifelike, we are reminded that this rhino, coming to life without his natural context, is entirely artificial.

For this acquisition, conservation focused on thorough documentation of the designer-approved installation and clear specifications for future installations. This piece was commissioned by the Cooper Hewitt, Smithsonian Design Museum and the Cube Design Museum and the Nature Design Triennial was the first time it was installed. As such, the designer Alexandra Daisy Ginsberg and the rest of the design team including The Mill, and sound designers Chris Timpson/Aurelia Soundworks were heavily involved with the installation process.

Working with digital conservation contractors Small Data Industries, Cooper Hewitt staff carried out a designer interview, created an iteration report, and selected and purchased display equipment to ensure the ability of the museum to redisplay the work in the future. Particular concerns for this installation centered around scale, lighting, and sound performance. Per the designer’s preferences, the raw rhino video file should not be shown online or in a context that it is not able to be experienced as a life-size rhino. This would distort and change the intention of the work. (As a result, Cooper Hewitt created video documentation of the installation, which is suitable for sharing online.)

A floor-to-ceiling projected video and sound installation is located at one end of a darkened gallery; a plinth with a small secondary screen is located mid-gallery. A full-size adult rhino confined to a white room appears on the projection screen. His form is heavily voxelated, his sounds are highly distorted. Over the course of a two-minute sequence, the rhino stomps, lumbers, and grunts around the room, his form and sound becoming more highly resolved and clear until the rhino is lifelike and returns the gaze of the viewer. He then disappears from the room, before reappearing to begin a new sequence. Three sequences are shown. The projected video is displayed in sync with the content on the secondary screen, which documents the AI-generated paths that the artificial rhino follows and the development of his grid cells.

Image below: Installation view of The Substitute at Cooper Hewitt 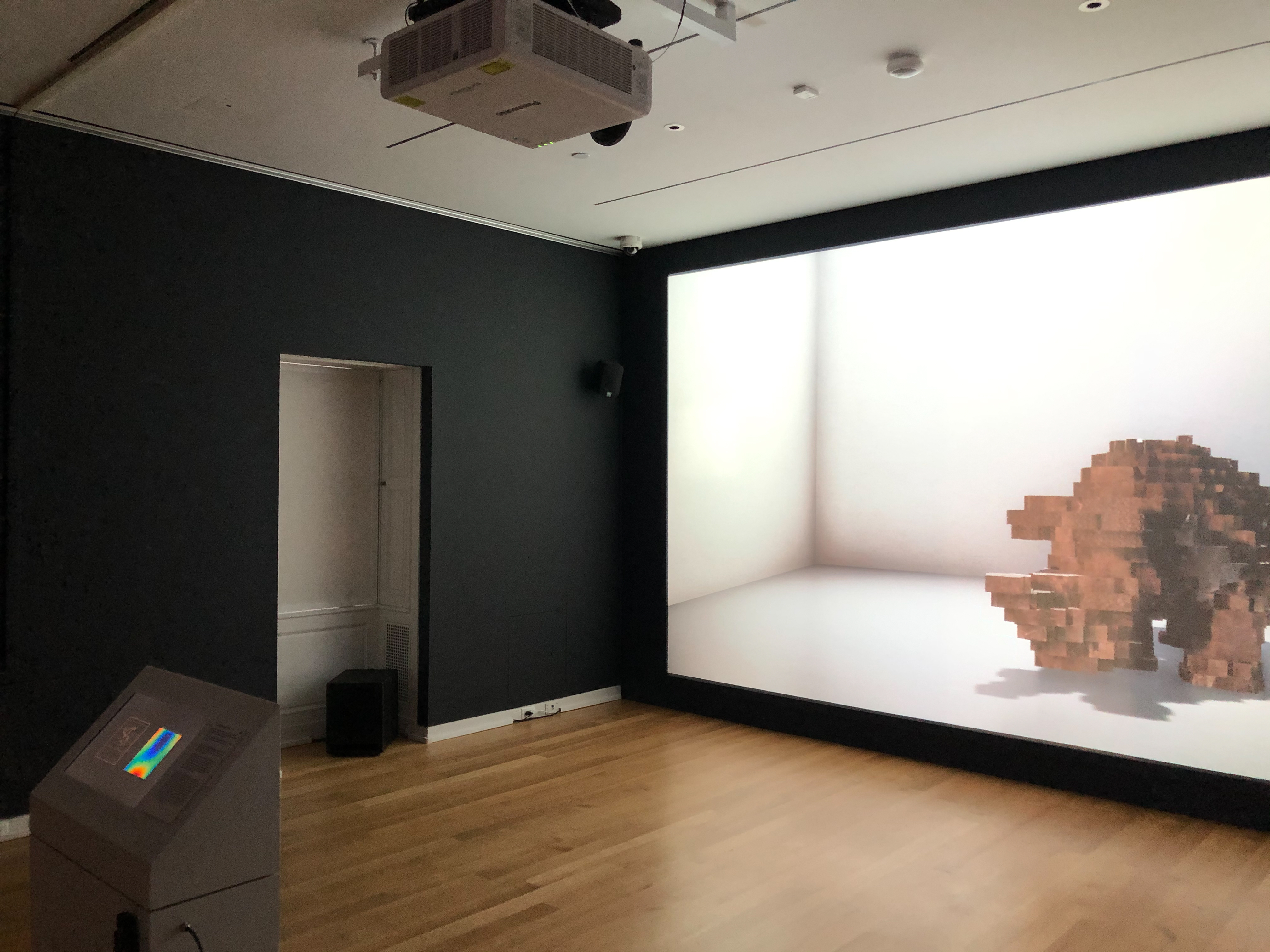 The projection screen is surrounded by a frame  painted the same color as the walls to give the illusion of fenestration, akin to a windowed diorama. The projection itself needs to be incredibly bright, unless light leak from surrounding galleries can be controlled. It is critical the projection be as high-resolution as possible and displayed at a scale so the rhino appears as a full-size adult. The rhino makes eye contact with an average-size adult standing in the center of the gallery, which is the installation’s “sweet spot.” Light levels in the gallery should be minimal at most, and optimally off.

Sound is emitted through stereo speakers mounted to the sides of the projection. The subwoofer is critical to suggest the size of the rhino via his deep rumbling stomps. Volume is to be loud-enough to leak out of the gallery (drawing the curiosity of museum visitors), but not so loud that it is uncomfortable to be in the gallery.

The viewer’s ideal position to enhance the effect of the rhino’s returned gaze is standing in the center of the gallery approximately six feet back from the projection. Ideally the secondary screen kiosk is located at this position to guide the viewer to the “sweet spot.” An optional (sub-optimal) location for the secondary screen is mounted to a wall near the projection.

Image below: Visualization of AI agent and grid cells on secondary screen kiosk 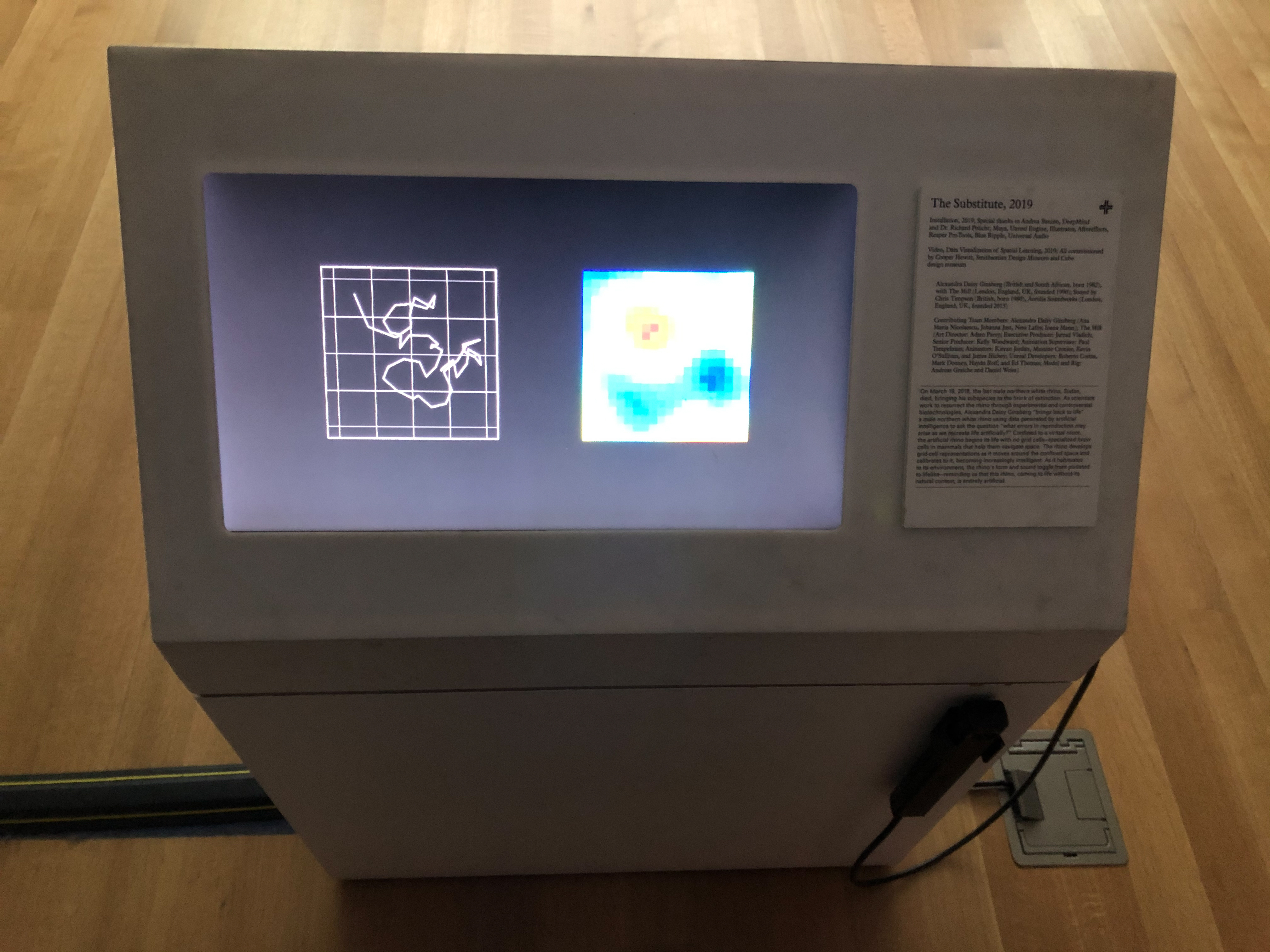 About the artist
Alexandra Daisy Ginsberg is a British artist, designer, and scientist. She received her MA (Cantab) in Architecture from the University of Cambridge in 2004, and her MA (2009) and subsequent PhD (2018) in Design Interactions from the Royal College of Art. Her PhD, titled Better, focused on the human notion of a better future and how it influences design today. Ginsberg’s work is multidisciplinary and raises questions concerning climate change, species extinction, biotechnology, and other challenges to our future by fusing art, design, synthetic biology, writing, and curation. She is the lead author of Synthetics Aesthetics: Investigating Synthetic Biology’s Designs on Nature (MIT Press, 2014). Ginsberg’s Designing for the Sixth Extinction was nominated for Design Museum’s Designs of the Year 2015 and was featured in Beauty—Cooper Hewitt Design Triennial in 2016. She won the World Technology Award in design in 2011 and the London Design Medal for Emerging Talent in 2012. Her projects, Resurrecting the Sublime and The Substitute, were exhibited in Nature—Cooper Hewitt Design Triennial in 2019.