Cloud Music is a hybrid sound and video installation. A closed-circuit TV camera is directed through a window to the sky. Custom electronics read the moving image like a sheet of music, transforming the movement of clouds and changing light into a living composition of musical notes. The resulting electronic score fills the space with subtly shifting harmonics, transporting the natural environment into the gallery for an immersive audio-visual experience. A playful and conceptual homage to chance, Cloud Music enables us to "listen" to video as a nature-driven event unfolding in real time.

Cloud Music came to the Smithsonian American Art Museum in 2013 from the Robert Watts Estate and the artists David Behrman and Bob Diamond. Critical to understanding the artwork and establishing a conservation program for the piece, the acquisition included a substantial archive of materials related to its development and history, from original schematic diagrams and correspondences between the artists to documents, photographs and recordings from previous exhibitions, as well as installation components.

In advance of the delivery and installation of Cloud Music, Curator Michael Mansfield reviewed the acquisition package with SAAM's former staff Conservator Hugh Shockey, who regularly worked with SAAM’s time-based media artworks. Together they assessed the condition of the components and identified the materials essential for display and operation of the artwork in the galleries. These initial evaluations helped articulate several steps required to ensure the long-term placement of the artwork in the permanent collection and its successful exhibition in the museum. First, a condition examination would evaluate the work’s construction, operational status and functionality. Then, a series of aesthetic condition issues would need to be addressed prior to storage or installation.

Image below: Historic components arranged for testing in the conservation lab, including amplifiers, speakers, and monitors to be used for exhibit. 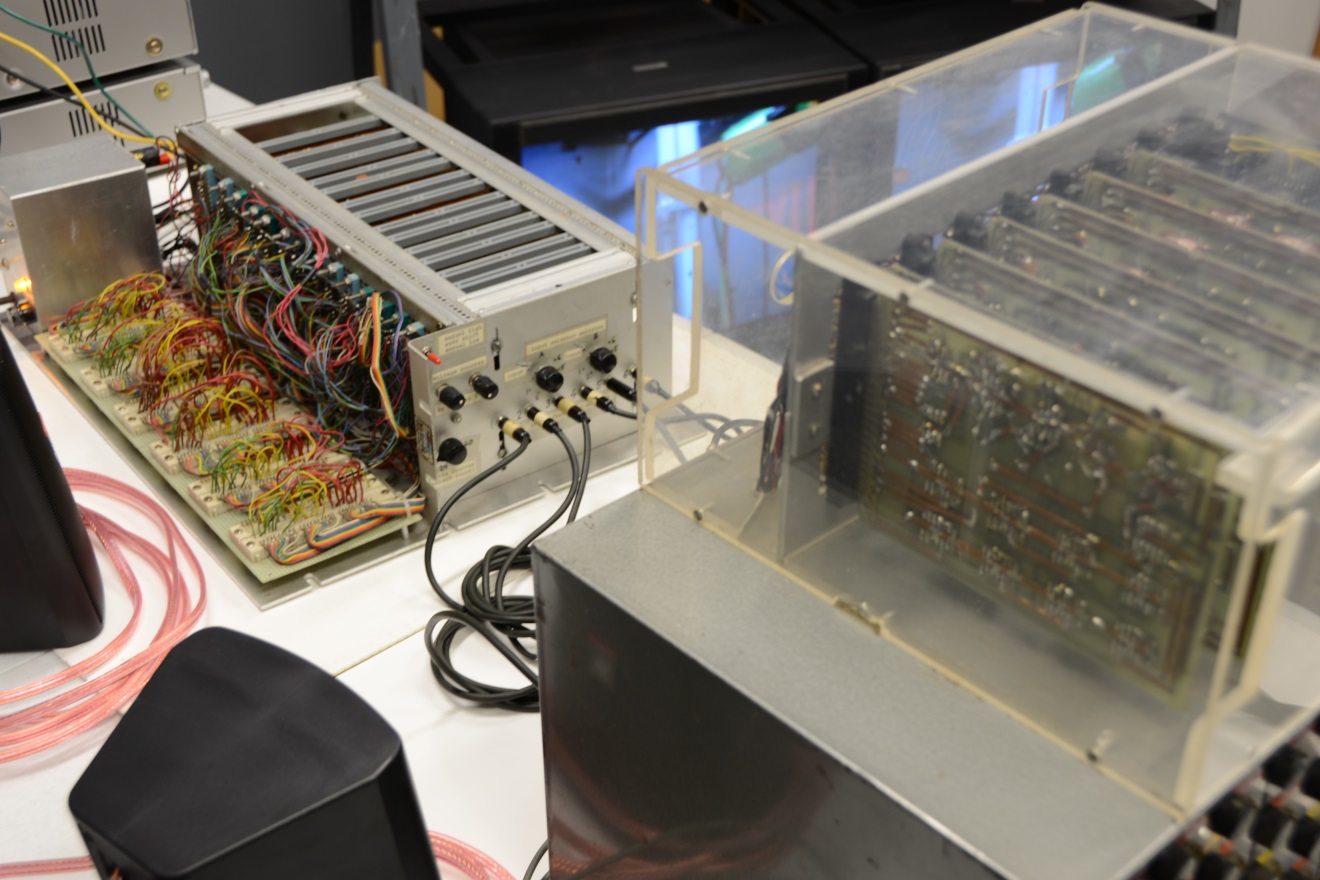 As a critical part of the baseline conservation assessment and evaluation, Shockey set up the core components of the work: the video analyzer, music synthesizer, and historic custom cabling, along with stock components from American Art’s exhibition inventory. This initial setup was an essential step in testing functionality and in evaluating the operational stability of the historic electronics in anticipation of an extended exhibition schedule. The evaluation setup demonstrated that each channel emanating from the analyzer and the synthesizer of the work were functional. The analyzer reacted properly to changing light conditions and the synthesizer responded to signal changes within its programed harmonic structure. During the evaluation, the total electrical draw of the combined components was measured and recorded. It was noted that the cross hairs of the analyzer required a “warm up” period before they would stabilize on screen. These small details were vital for the Exhibitions team in planning an appropriate power source and daily operation in the gallery space.

The components were powered and tested without incident for several days, providing an accurate picture of the artwork’s routines and process throughout its regular cycle. Once proper operation was documented, Shockey then focused on the physical appearance of the hardware. A number of condition issues compromised the aesthetic appearance of the components. This included heavy surface dirt and grime accumulation, detachment of the self-adhesive tape used to demarcate the control grid on the video analyzer and delamination of the tape’s clear coating from its colored paper carrier. In addition to considering the composite nature of the components – comprised of mixed metals, mixed plastics, paper, and historic adhesive tape – the vulnerability of the exposed wiring and circuitry required great care during treatment. After stabilization and surface cleaning, the components were again reconnected in the test setup to confirm that treatment procedures had not inadvertently affected performance. 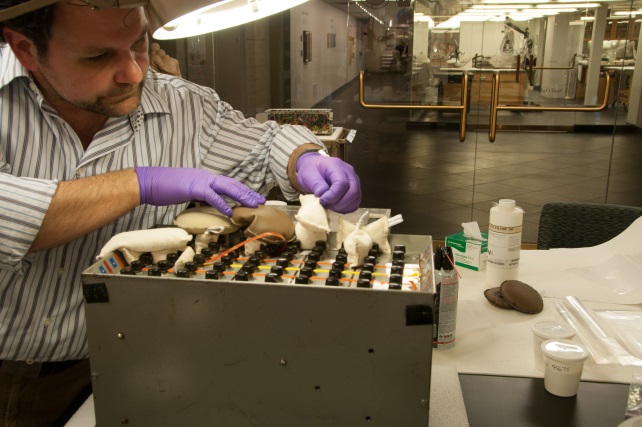 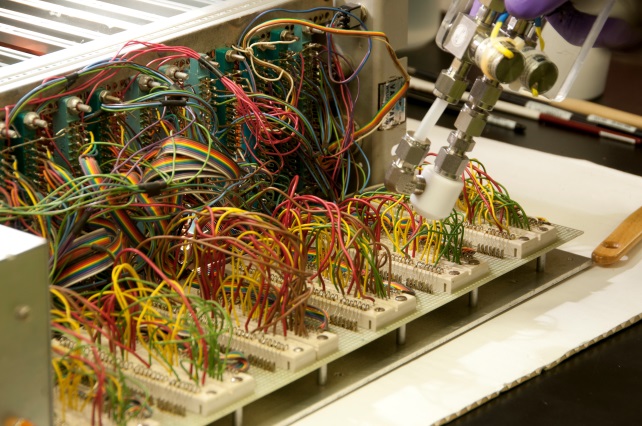 Failure of a Historic Component
After several weeks on display, museum support staff reported a problem with the artwork. During gallery checks, they witnessed the monitors simultaneously flicker and become distorted. Sound continued, but the harmonics no longer changed. Because the video signal was distorted but the audio output was still functioning, it was immediately suspected that the Video Analyzer had failed independently from the remainder of the installation. This suspicion was supported in conversation with the artist Bob Diamond, who designed the analyzer. Mr. Diamond recalled that during testing, one of the component’s two power supplies had performed erratically, which caused some instability in the cross-hairs. He suggested testing the component at the museum to confirm our suspicions.

Image below: Documentation of the distorted video signal 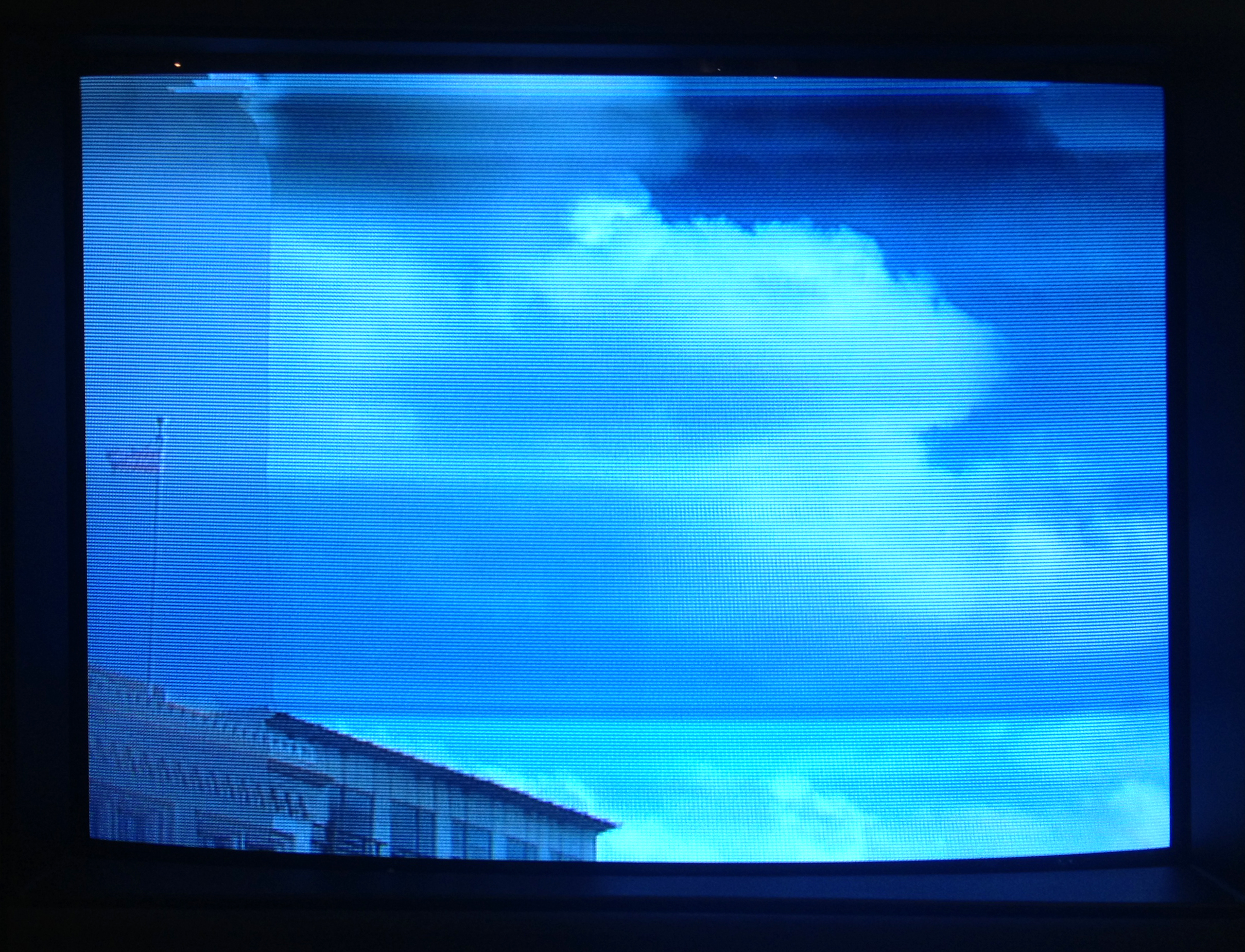 Image below: Removing the historic power supplies from the Video Analyzer after testing. 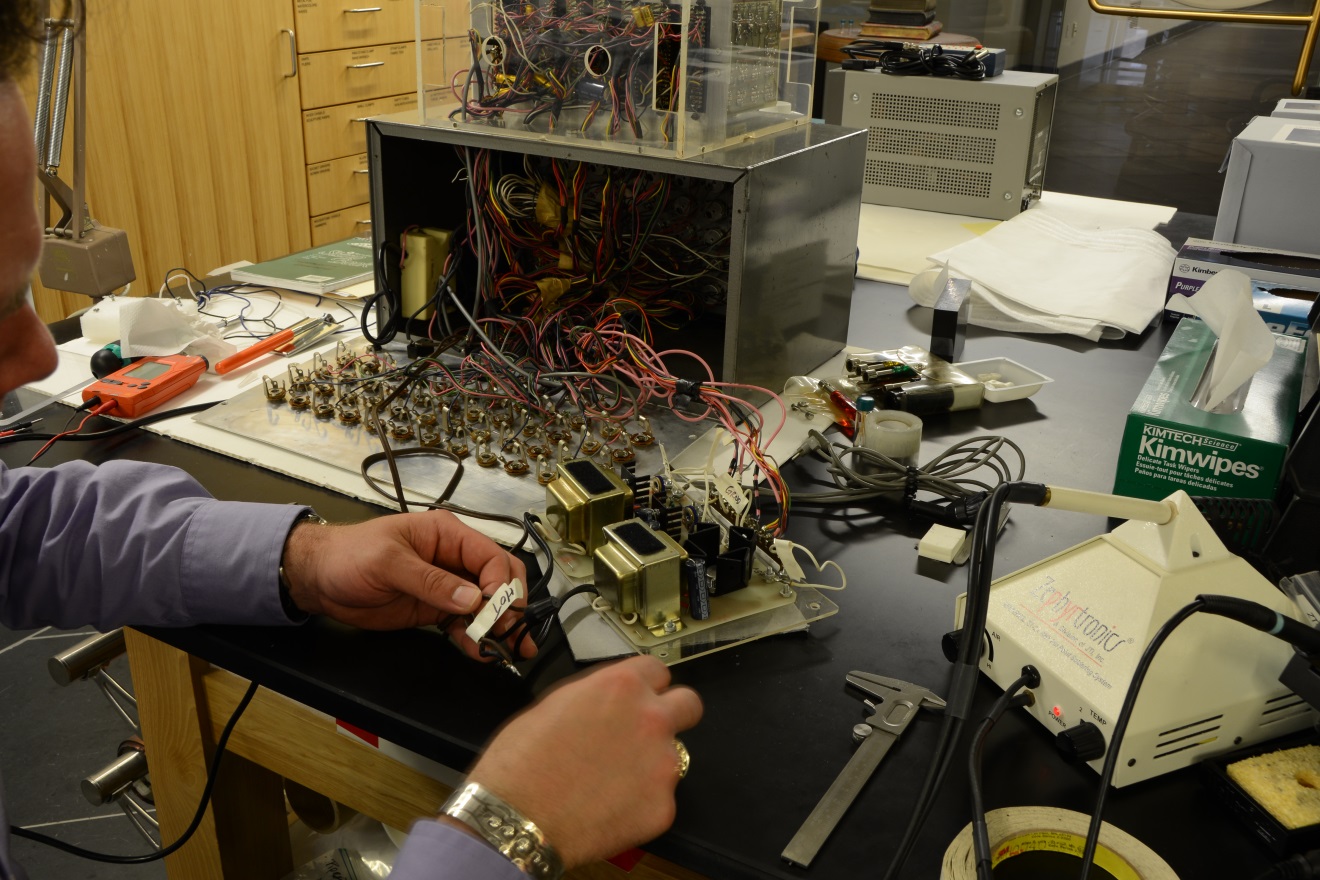 Image below: Preparing to insert the new power supplies into the Video Analyzer 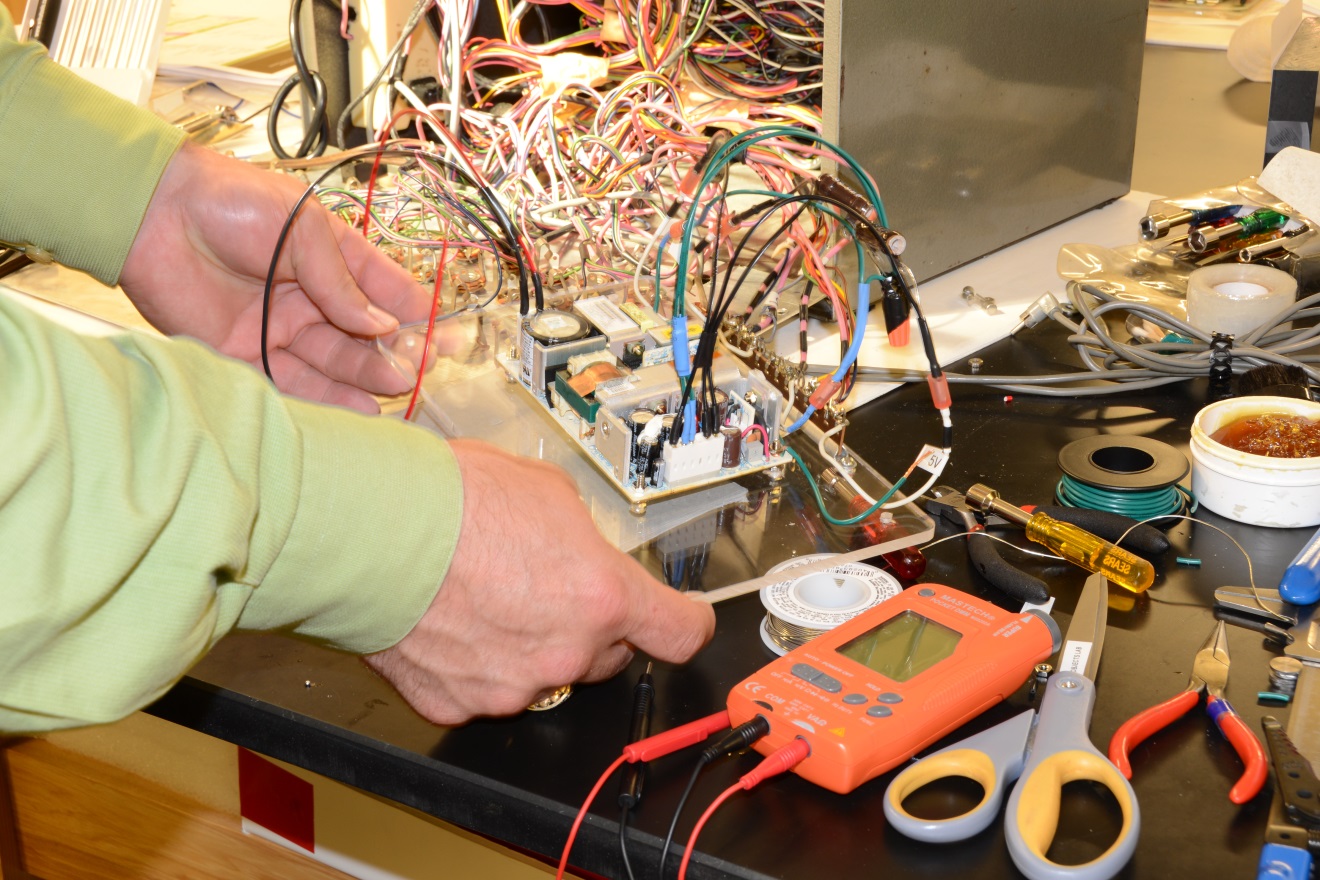 The Video Analyzer was removed from display and taken to SAAM’s conservation lab where Conservator Hugh Shockey began an evaluation. Using a volt-meter to measure the power output from the two transformers, he confirmed that one was indeed functioning well below its specified voltage and would need to be repaired or replaced. In consultation with Mr. Diamond, a course of action was initiated. Both historic power supplies would be replaced with contemporary and stable transformers. Mr. Diamond specified the replacement components he preferred. Mr. Shockey undertook the removal of the malfunctioning power-supplies and integrated the new components with the historic wiring, taking care to allow for possible future replacements. Following this procedure, the Video Analyzer was tested and reinstalled in the gallery. The historic power supply was retained with the archival materials related to Cloud Music so that future curators, conservators, and scholars may better understand the evolution of the electronic hardware and conservation efforts that enable the work of art.

Cloud Music’s installation at the American Art Museum was organized in consultation with the Robert Watts Estate, and artists David Behrman and Bob Diamond. A space at the south end of the Lincoln Gallery, where SAAM presents contemporary art, was identified, based on its proximity to a window, available wall space and potential for creating a multi-dimensional experience. In this approved configuration, the window offered clear access to the sky, and received light throughout the day. It was also important that no direct sunlight enter the lens or overexpose images on the television sets. The camera was stationed by tripod on the window sill, out of reach but still visible to the public. The original video analyzer and audio synthesizer were displayed beneath a clear vitrine. Contemporary power conditioners offered additional protection for the vintage components and were housed beneath the pedestal. Two CRT televisions displayed the video feed and crosshairs from the analyzer. The two monitors were installed on separate walls, displaying the same image while taking advantage of the dimensions of the space. Each audio channel from the Synthesizer was distributed independently to its corresponding speaker. Audio output was fed through the base to 6 separate TOA amplifiers and out to 6 loudspeakers. Speakers were placed relatively high on the wall so that the sound emanated from above. Additionally, speakers were distanced from one another accordingly to emphasize their distinct channels and the changing harmonics in space. They were arranged chronologically and located in reference to the crosshairs from the analyzer. The varying vertical and horizontal placement relates to the positioning of crosshairs on the video screen. The direct visual connection between speaker placement on the walls and crosshair alignment on the video screen, in effect, visually illustrates the relationships between atmospheric changes outside – as evidenced on the video screen – and its aural affect on the physical (sonic) space in the gallery. 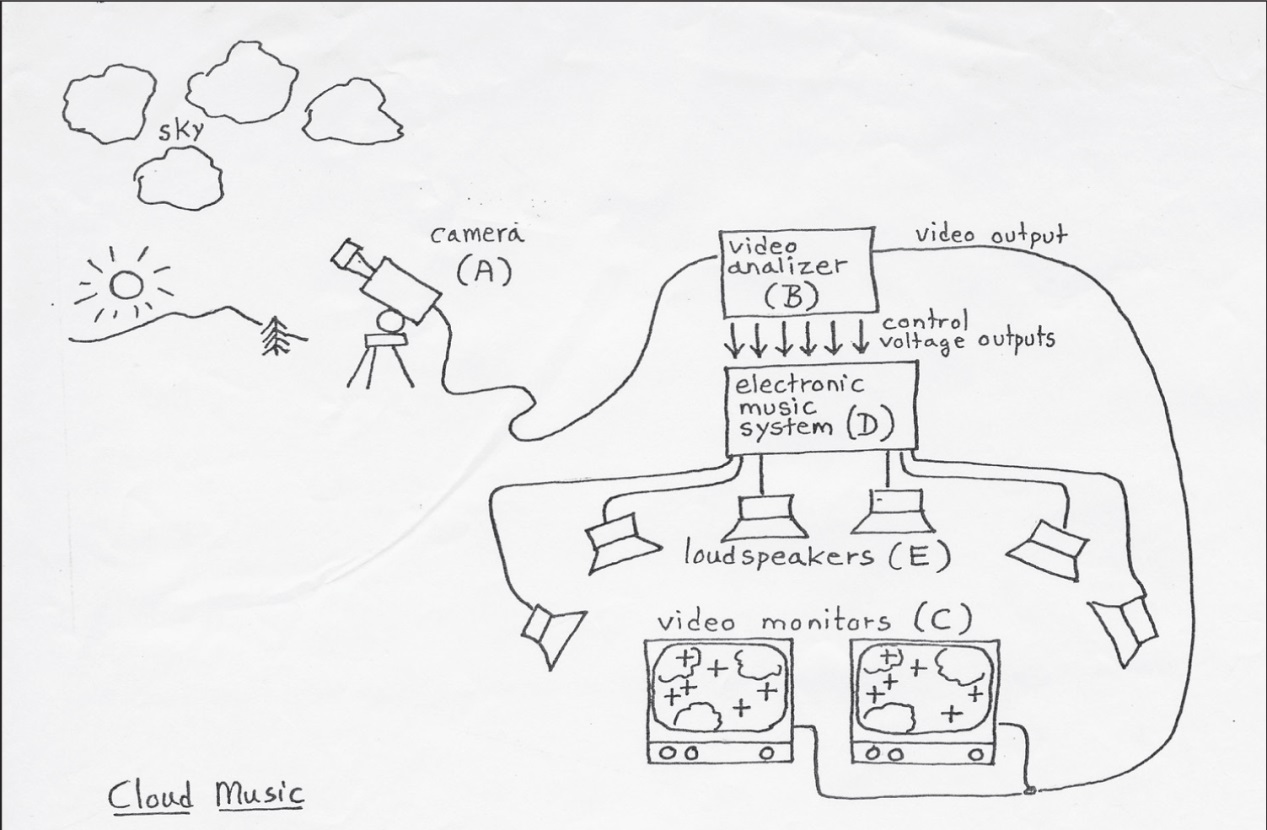 Cloud Music traveled extensively after its completion in 1979 and was exhibited around the world in notable exhibitions. It was last exhibited in 1992 at Ars Electronica in Linz, Austria and then at Anthology Film Archives in New York City.

About the Artists
Cloud Music is the result of one such collaboration between three innovative and influential artists; Robert Watts, David Behrman and Bob Diamond. Robert Watts (1923- 1988) was the conceptual instigator for Cloud Music and a leading artist within Fluxus, one of the major avant-garde art movements of the late 20th century. As a trained engineer, he was an influential champion of non-traditional materials and regularly challenged the processes of art making. David Behrman (b. 1937) is an internationally recognized experimental music composer. He regularly collaborated with Merce Cunningham and John Cage, and continues to perform and exhibit multimedia installations worldwide. Bob Diamond (b. 1946) is an electrical engineer and mathematician who went to university at the age of 16. He was subsequently hired by NASA at 18 to work on Saturn Booster Rockets, (so his work is also represented at the National Air and Space Museum). In the late 60s, he turned his attention – and considerable technical aptitude – to begin working as an artist. Together these artists literally invented new technologies to realize a shared creative vision.