Go for the gold with Olympic history from across the Smithsonian

While our favorite sport is visiting museums, the Smithsonian holds many objects related to the Olympic Games.

Our collections take us from the track to the pool to the balance beam. For the Summer Olympics, explore these pieces from across our museums. (Winter sports more your thing? Check out these objects from our collections.)

Dominique Dawes and the Magnificent Seven

Gymnast Dominique Dawes wore this leotard at the 1996 Summer Olympics in Atlanta as a member of the gold-medal-winning "Magnificent Seven" team.

Famous for her back-to-back tumbling passes, Dawes also took home an individual bronze in the floor exercise, becoming the first African American woman to medal in her sport. She began her Olympic career at age 15 and was part of three medal-winning Olympic teams.

The 1996 Olympics marked a pivot point in women's sports, as girls raised under Title IX helped the U.S. bring home the most medals in what became known as "The Summer of Women.” In 1972, the federal government added Title IX to the Civil Rights Act, barring discrimination in education based on sex—which included athletics. The women’s gymnastics, soccer, softball and basketball teams all won gold in Atlanta, propelling the U.S. women athletes into the global spotlight.

When the national anthem began to play at the medal ceremony of the 1968 Olympic Games, U.S. Olympians Tommie Smith and John Carlos bowed their heads and raised their fists.

Smith and Carlos won gold and bronze respectively in the 200-meter sprint in Mexico City. Then they used the podium to protest.

They each wore a black glove symbolizing unity and strength, and black socks without shoes to represent African American poverty. Carlos unzipped the jacket of his tracksuit in solidarity with U.S. blue-collar workers. Both wore beads in honor of lynching victims.

Peter Norman, the Australian silver medalist, also joined the protest in solidarity by wearing a badge for the Olympic Project for Human Rights (OPHR). Smith and Carlos were booed, told to leave the stadium, and the U.S. Olympic Committee suspended the two athletes.

Smith donated his warm-up tracksuit, race shoes, and the box containing the olive branch he held on the medal platform to the Smithsonian’s National Museum of African American History and Culture.

Swimmer Dara Torres has competed in five Olympic Games, the first American swimmer to do so, and won a total of 12 medals.

She started training for her first Olympics as a high school junior, and won her first gold in the 400-meter freestyle relay in 1984. Torres came out of retirement in 2000 and then again in 2008, when at age 41 she was the oldest swimmer in history to represent the U.S. in Olympic competition. That year she earned three silver medals.

In 1912, Jim Thorpe (Sac and Fox) swept both the pentathlon and decathlon at the Olympic Games, becoming the first and only Olympian to accomplish such a feat. Thorpe became the first Native American athlete to win an Olympic gold medal for the U.S., and he also excelled in football, baseball, basketball and lacrosse.

The year after his Olympic victories, the International Olympic Committee stripped Thorpe of his amateur status—and his medals—when it was determined that he'd previously been paid to play baseball.

Thorpe’s name was removed from the record books. His score in the decathlon remained unbeaten but unacknowledged for decades.

Family and friends petitioned the International Olympic Committee to restore his honors, and the effort intensified after Thorpe’s death in 1953. In 1982, Thorpe was reinstated as the winner of the 1912 pentathlon and decathlon.

Thorpe’s daughter Grace was a Native American rights activist and an advocate for her father. Her papers, which are in the National Museum of the American Indian Archives Center and were recently transcribed by volunteers with the Smithsonian Transcription Center, document the decades-long campaign. 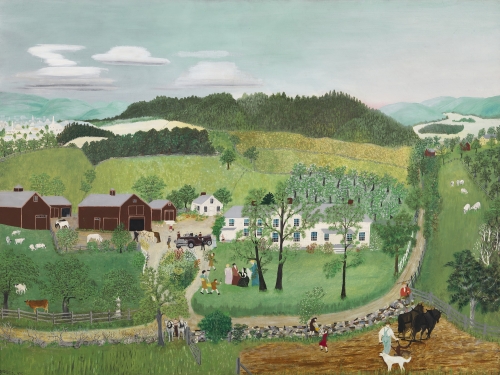 Born September 7, 1860, the self-taught artist painted nostalgic scenes inspired by her rural past.

This cell phone helped save a life.
Back to Top